Budget watch: Beastie Boys aside, we know heaps about the surplus search

In just over three weeks time, Crikey will again be bunkering down for five hours in Parliament House's bowels to get harassed by junior Treasury officials during the annual ritual that is the budget lock-up. 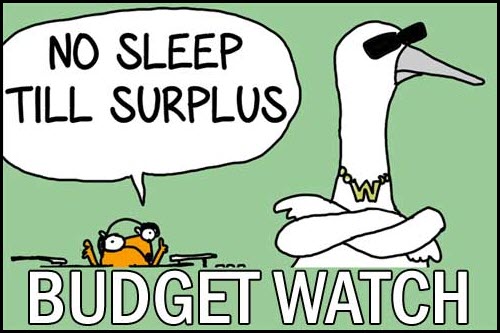 In just over three weeks, Crikey will again bunker down for five hours in Parliament House’s bowels to get harassed by junior Treasury officials during the annual ritual that is the budget lock-up.

Early indications suggest that despite years of bans under Peter Costello, our crack team comprising dumped AFR op-ed hero John Quiggin, First Dog on the Moon, Bernard and this alleged reporter will be given the green light to cast an eye over hundreds of pages of budget papers as trays of dubious sandwiches turn to cardboard.

After taking a massive bath on last year’s low-selling (but totally metal) Deep Cuts T-shirt, the cartoonist is tilting towards a limited edition “No Sleep till Surplus” design (above) in apparent homage to No Sleep till Brooklyn, the sixth single drawn from the Beastie Boys’ excellent 1986 debut Licensed to Ill.

Wayne Swan has staked his economic reputation on delivering a surplus by June 30 2013 — some agree with his contention that it comes down to fiscal necessity, most say it’s because a deficit would leave Labor open to political attack from Tories yearning to revive the “guilty party” narrative in the lead-up to next year’s poll, based on the cynical assumption that the average voter is unable to distinguish between their household finances and a nation state wielding compulsory taxation powers.

Another justification — that a deficit would mean downgrades in Australia’s AAA credit rating — was rubbished last week when respected Societe Generale economist Christian Carrillo said the reverse was true — that the stripping of $40 billion out of the economy would actually leave the country teetering on the edge of recession. The IMF has also questioned the strategy in a report issued on Friday — the only hope of keeping the eastern seaboard afloat would seem to be a rewriting of the Reserve Bank’s charter to let it keep interest rates low.

So, with most of the big announcements set to be strategically leaked from anonymous Hotmail accounts by experienced message masseuses John McTernan and Sean Kelly, what do we know so far?

Quite a bit, surprisingly …

At a shade after 7.30pm on May 8, the federal member for Lilley will approach the dispatch box and announce the erasure of the predicted $37.1 billion deficit to hearty backbench cheers.

The “hardest budget of them all” would enforce a turnaround from previous Labor deficits of $27 billion, $54.7 billion, $47.7 billion and about $40 billion into a magical surplus somewhere between $1.5 billion and $5 billion. It will represent the biggest one-year fiscal turnaround since records began — about 2.5% of GDP.

But the budget is under serious pressure on the revenue side. The overhang of the GFC means that capital gains tax receipts of $11 billion will never return and company losses being drawn on as deductions will cost the government $8 billion over three years. At least $40 billion in tax revenue has evaporated in the past six months and expected GST takings of $47.6 billion are down by $5 billion on last year’s estimates.

Economic growth in Australia appears to have plateaued at about 3%.

The other gains will have to be achieved through what the commentariat will inevitably refer to as “swingeing” cuts, some of which have already been foreshadowed.

As Crikey documented last year, the Commonwealth’s main expense and revenue items remain pretty stable from year-to-year. Social security accounts for a third of expenditure followed by “other purposes”, health, education and defence and general public services. Taxation comprises the vast bulk of revenue (94%) out of total income of about $350 billion. For the first time in years, this year expenditure will be oscillating at about the same level.

Bill Shorten’s $13.6 billion baby will be a centrepiece of the budget, despite the NDIS not actually starting until 2017 or 2018. The government plans to spend about $550 million to set up the agency and about a further $900 million for trials next financial year.

A report by National Seniors Association to encourage oldies to stay working is likely to get up. The body’s 36-point action plan has been handed to the government and is apparently under serious consideration. Initial funding has also been mooted for a shake-up of the aged-care sector.

The tax is linked to the funding of other measures, including $6500 in tax write-offs for 2.7 million small businesses, a bolstered state infrastructure fund and $500 billion in extra superannuation contributions by 2035, via 0.25 percentage points increases each year from 2013-14 until 2019-20 (paid for by business but incurring costs to the government courtesy of a $780 million loss of tax revenue).

A 1 percentage point reduction in company tax from 30% to 29% will apply to small businesses from July 1 and about 3300 larger businesses a year later, if the Greens don’t block it in the Senate.

According to the Coalition, these measures could end up costing much more that tax raises if Chinese growth falters.The carbon tax

The $23 a tonne carbon tax on the nation’s 500 biggest polluters will end up costing more than it raises from permits and fuel tax credits in the first year as the government scrambles to compensate Australians liable to punish Labor at the ballot box.

In addition to the $100 supplements to family payments to be paid into bank accounts next month, 6 million Australians will get a tax cut of up to $300 beginning on May 9 and extending into next year. The tax-free threshold will increase on July 1 from $6000 a year to $18,200.

Following the eventual success of means testing private health insurance in last year’s budget, the government may move to further wind back the Medicare rebate to save about half a billion dollars a year. The 50% childcare rebate apparently remains a sacred cow, however.

Other handouts including tax discounts on golden handshakes and capital gains tax deductions will remain, despite the best efforts of the social security lobby to have them axed.

A business tax working group has been desperately scratching about for savings to fund $450 million in tax cuts.

A proposal for a mooted “carry-back” system in 2013-14 will enable business to claim back $1 million in losses at a total cost to the budget bottom line of $450-800 million. The Treasurer appears to have ruled out removing tax breaks on oil and gas pipelines worth $1 billion and mining deductions worth $860 million over three years.

But reductions to the business fuel excise and changes accelerated depreciation on capital investments among oil companies, miners, aviation and transport outfits that currently costs $1.3 billion a year may still be on the table.

The Prime Minister has announced an extra $1.75 billion to be handed to the states over the next five years to harmonise the education and training sector and offset the droves of youngsters flocking to impractical theory-based university courses.

About $800 million — or $1.5 billion over three years will be culled from departmental budgets next year as part of the mandated 4% “efficiency dividend”.

Several have already been flagged during Senate estimates, as reported in today’s Australian. These include:

The Department of Human Services will cut its 36,600-strong staff by about 470 or about 1.3% but front-line services, including doctors and nurses in public hospitals will be quarantined.

The Department of Foreign Affairs and Trade will move to save $59 million over three years through “natural attrition”.

Austrade will make staff cuts to save $12 million.

Treasury will lose one in five of its staff over the next two years.

The Department of Agriculture, Fisheries and Forestries will cut $4.7 million over three years by pooling travel bookings.

The $41.3 million Municipal Services Program to close the gap between Aborigines in remote communities and the rest of Australian is on the chopping block.

Lobby groups have already started issuing their usual ambit claims, the success of which are reported back at the letterboxes to get quotes in the newspapers in a process cruelly mocked by Guy Rundle in 2009.

The Greens are calling on the government to slash the $2 billion diesel fuel rebate scheme, a measure savagely opposed by the National Farmers Federation. Fresh deputy Adam Bandt wants the government to cut the $11-15 billion in tax concessions gifted to the mining industry.

They also want also want a commitment to a proper “Denticare” system that will cost the budget $5 billion annually by 2016/17. Tanya Plibersek has agreed to an extra $165 million in teeth funding, but Treasury hard heads will almost certainly run screaming from the bigger proposal.

The party is asking that definition of small business be increased from $2 million to $5 million in revenue.

The states have arced up over the mooted end of 20 National Partnership Programs worth $1.5 billion, which Julia Gillard has failed to commit to refunding.

The business lobby has been keen to hold on to tax credits and favourable capital depreciation rules, and also wants red tape and green tape to be slashed.

The welfare lobby wants Newstart bolstered by $50 a week from the current internationally embarrassing rate of $489.70 a fortnight, or less than $35 a day. But Kate Ellis has announced that those amounts will stay where they are.

I think some of the ‘savings’ will be just global financial crisis stimulus not renewed. For example, the Australian Government’s productivity places program was a subsidy to employers to keep their workers occupied with training which the States claimed as a ‘cut’ to funding for vocational education because the program isn’t being extended.

I thought the reference was to that great hit by Morris Minor and the Majors called Stutter Rap – “No sleep till bedtime”.

For some time until the arrival of the GFC, fiscal policy played a very minor role in supplementing monetary policy. The desire of the Liberals and then Labor to achieve a surplus of about 1% of GDP was a political imperative to show that they were “good housekeepers”. The Budget was therefore more about politics than economics. The GFC saw a return to Keynsian pump priming in order to minimise the inevitable downturn in the economy. Fiscal policy was back! Should the achievement a a budget surplus add to a private sector downturn, the RBA will of course lower interest rates to neutralise that effect. Monetary policy will once again become the key swing instrument of economic management as it usually is. Fiscal policy will once again be an anual yawn for the economists packing the lock up.

The 2 million taxpayers who pay 65% of personal income tax collected (which is itself 60% of Govt revenue) will now pay 70%. The vast bulk of the populace will pay nothing, and get handouts. In the forlorn hope of buying votes.

The upper middle will pay for it all-raise the tax free threshold for low/middle income-accompanied by rises in tax rates above this to keep the upper middle funding everything. Flood tax to continue. Carbon tax and compensation for some. Private health. Super changes. Raised tax free threshold accompanied by increased rates above that. Complex. Reduce the incentive to work harder, do overtime, second job.

All directed at one thing-the upper middle to pay more. Middle to pay nothing. And as many handouts as possible-a cheque with “Commonwealth of Australia” written on it in your letterbox. The high net worth types don’t need income, and negative gear their income down. Upper middle is the softest target. Little power, little votes. Why can we not get a surplus with near full employment?