Normally, a balanced and independent media outlet would wait to see who has nominated, read the various policies and listen to the campaign debates before taking a final position. Alas, yesterday’s Hun provided editorial endorsement for Doyle before he had even formally announced his candidacy. Talk about a media blank cheque when the following appeared in an editorial six months before the polls close:

“The Herald Sun is pleased to give Cr Doyle its support in re-energising Melbourne as the gateway to the state.”

Why bother covering a campaign for Melbourne’s directly elected lord mayor when Australia’s biggest-selling newspaper has already made up its mind? The Herald Sun still doesn’t even know if a credible alternative candidate will emerge. For instance, I spoke to Peter Reith about nominating a couple of weeks ago and he didn’t categorically rule it out.

Of course, the Herald Sun’s Doyle endorsement had nothing to do with Robert Doyle leading the push to declare Rupert Murdoch’s mother, Dame Elisabeth Murdoch, a Freeman of the City at a lavish function just two short months ago. It would be interesting to know whether the Murdoch family or ratepayers picked up the bill.

If this was Britain, Cr Doyle and the Herald Sun bosses would potentially be fronting the Leveseon inquiry to explain the appropriateness of these dealings. And won’t it be fascinating to watch Rupert and James Murdoch, along with David Cameron, Tony Blair and Gordon Brown all giving extended public evidence over the next month.

Robert Doyle has played a very Jeff Kennettesque game with the Herald Sun and 3AW’s Neil Mitchell, putting them on the drip for exclusive announcements in exchange for their public endorsement. Surely a more combative media that treats issues and candidates on their merits and doesn’t go soft on sources would be a healthier arrangement in our democracy. — Stephen Mayne (who was not paid for this item and will be standing in the separate council elections in the City of Melbourne later this year)

Front page of the day. Indonesian newspaper Riau Pos — located in central Sumatra — covers the earthquake that occurred off the north west coast, in the Indian Ocean: 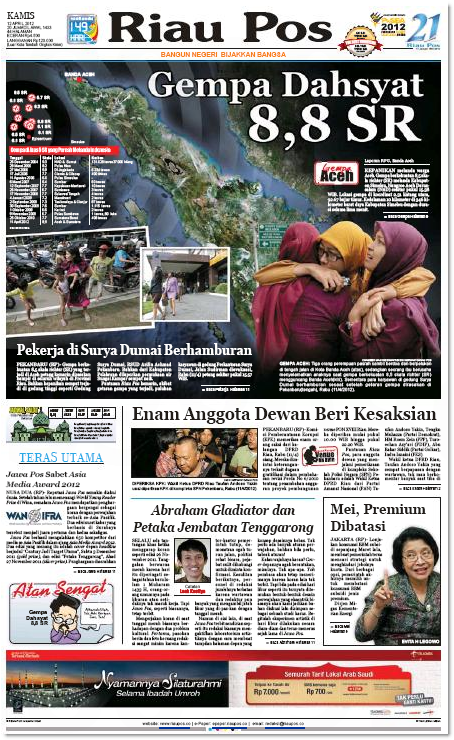 “Senior Scotland Yard figures were guilty of ‘imprudent decisions and poor judgment’ in their employment of a former deputy editor of the News of the World as a public relations consultant, police watchdogs said yesterday.” — The Independent

“Gawker‘s gleeful provocation of Fox News with the help of the ‘mole’ it hired this week has reached its logical conclusion: lawyers for Fox have sent Gawker a cease-and-desist order accompanied by a threat of legal action for ‘criminal and civil wrongdoing’.” — The Guardian

“The use of smartphones and social media has risen to the fore across Asia since 2004, which helped to spread the word on Wednesday across other affected nations such as Thailand and India.” — ABS CBN