Paper stalks union boss at night. Which prominent trade union leader’s nocturnal activities are being closely monitored by a Sydney tabloid keen to shoehorn one of his youthful paramours into a devastating page one tell-all splash? Unfair harassment at Consumer Affairs. Is fairness in the eye of the beholder? Fair Work Australia has been quietly gathering complaints about Victoria’s […]

Paper stalks union boss at night. Which prominent trade union leader’s nocturnal activities are being closely monitored by a Sydney tabloid keen to shoehorn one of his youthful paramours into a devastating page one tell-all splash?

Unfair harassment at Consumer Affairs. Is fairness in the eye of the beholder? Fair Work Australia has been quietly gathering complaints about Victoria’s fair trading agency Consumer Affairs, we’re told. An increasing number of staff have been talking to FWA and WorkSafe about what our mole calls a “growing culture of bullying and harassment”.

Newman hiring consultants for his office? Queensland Health denied to us that it was hiring new consultants despite a freeze promised by new Premier Campbell Newman. But according to another George Street insider, they’re being hired “in droves” at Newman’s Department of Premier and Cabinet …

No checking guns on farms. We raised the alarm yesterday that the NSW government was allowing gun owners to “tick a box” to say they have permission to shoot on a private farm without checks. And as a Crikey correspondent writes today: “We have given permission for three gun owners to shoot on our property in the past decade. We have never been contacted to see if the permission is genuine or not, nor asked if the feral animals we have nominated as pests exist here. Police rarely respond to reports of illegal shooting outside of city limits.”

Irony lesson for grammar course. “The title of the following email caught my eye as an indictment of the recruitment standards of electorate officers in the parliament of Victoria system,” writes a Crikey correspondent. “The opening sentence ‘register on to the following course’ set off a little grammatically pedantic tic in my right eyelid, which became an almost complete seizure at the random use or otherwise of the full stop at the conclusion of sentences. I was torn as to whether to send this to you or to Alanis Morissette as a case study in irony.” 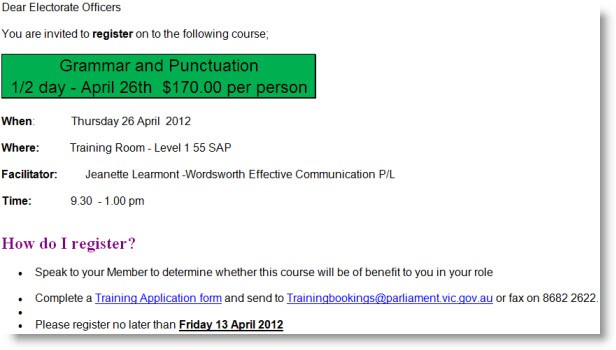 ‘Unauthorised transactions’ on uni cards. Students at the University of Sydney have had their electronic cards compromised. The following memo was dispatched:

Recently, unauthorised transactions have been detected in the processing of some student Campus Cards on which the ANZ/Visa prepaid function has been activated. The University and ANZ are currently investigating the problem.

As a precautionary measure, until further notice:

You can still use your Campus Card for identification, transport concession (if you are eligible), library borrowing and building access, and for purchases wherever Visa is accepted. However, a $100 maximum daily ATM cash withdrawal limit is currently in place. You can load funds onto your Campus Card via BPay (fee free), or at ‘7-Eleven’ outlets (fees apply). However, you will be unable to load funds at Auto Loader re-charge kiosks in the University libraries, at the SUSF Aquatic Centre, Arena and the Depot at Cumberland Campus. Signs in the University’s libraries will keep you up to date about arrangements for printing and photocopying.

For the moment, you will be unable to use your Campus Card or your current Printing and Photocopying Payment (PPP) Card for photocopying and printing in the University’s libraries. If you have an outstanding balance on your PPP Card it will be transferred to a new system, or refunded in due course.

The University is doing everything possible to ensure continuity of service. Thank you for your patience as we investigate and implement alternative processes, and please check the MyUni website for further announcements on this issue.

As one student told Crikey: “Why did they get the ANZ and VISA involved in the relatively straightforward process of running student cards anyway? It’s not like getting a pre-paid debit card is an issue for students; banks are falling over themselves to issue them …”