In today's Media Brifs: dose of reality crucial for Nine, Gyngell ... How Murdoch hacked: a conference ... Front Page of the Day ... Apple accused by US of colluding with publishers to fix price of ebooks and more ...

Dose of reality crucial for Nine, Gyngell. A portent of what is coming next week in Australia, when The Voice on Nine goes up against Australia’s Got Talent on Seven: ITV, the UK’s main commercial network, has shifted Britain’s Got Talent to a later timeslot. The change happens on April 21 and has been made after BBC1’s The Voice defeated the show in the time they overlap on Saturday nights (yes, Saturday nights for two expensive, ratings-grabbers — fancy that!).

The Voice starts at 7pm on BBC1 and runs until 8.20pm. Talent was starting at 8pm and running to 9.15pm. Now it will start at 8.30pm and end at 9.45pm. UK media and TV industry reports say the overlap has been just 20 minutes and for the three weeks the two shows have been on air, The Voice has consistently had a bigger audience in that 20-minute period. In the 20 minutes the two shows were both on air last Saturday night, The Voice was the clear winner with 10 million viewers against the ITV show’s 6.4 million. And there’s an ironic note here: ITV brought forwards the launch of the sixth series of Talent as a spoiler tactic to try and attack The Voice from its debut episode.

Nine debuts The Voice on Sunday night at 6.30 against Seven’s Dancing With The Stars. Nine also runs the Logies on Sunday night from 7.30. On Monday both programs will clash for an hour, from 8-9. Talent starts at 7.30, Voice at 8 o’clock (after the first episode of the new series of The Block). On Tuesday night they both start at 7.30: Talent runs for an hour (roughly), Voice ends at 9 o’clock. On Wednesday, no Voice on Nine, but after an hour episode of The Block Nine runs the 90-minute first episode of the new series of Celebrity Apprentice. Talent runs for an hour (roughly) from 7.30, then up against the special episode of Titanic from 8.30.

Nine needs to either win every night or bleed Seven and win a couple of key demos with The Voice/The Block and Apprentice. There’s well over $50 million of program costs in those three shows. It has already lost millions on the failure of Excess Baggage at the start of February (dead in three days). If two work, then Nine is the winner (from its point of view).

Seven wants to win, but has the ratings wins (especially this year), the audience numbers and the financial strength to be able to ride out one or two moderate performances. Nine is throwing these three programs against Seven in an effort to halt the terrible start to 2012. If they work then the financial pressures on Nine and parent Nine Entertainment (and CEO David Gyngell) will ease for a while. If one doesn’t work, then questions will be asked, if two only achieve moderate ratings then administration for the parent moves much closer. There’s an awful lot riding on this trio for Nine and its owners, CVC, plus the remaining banks and the two hedge funds who control much of its debt.

And Ten? Well, it has ducked for cover and will run its standard ratings line-ups, hoping it and its weak ratings and ad revenues don’t become collateral damage in the battle between Seven and Nine. Ten is running Offspring next Wednesday night at 8.30, aiming at 16 to 49 women viewers. Could be a clever move. — Glenn Dyer

How Murdoch hacked: a conference. A symposium on investigative journalism at UC Berkeley in California this weekend looks at the power of the press and the public interest. But the most interesting part of the conference will be a panel entitled “The Murdoch Effect: The News At Any Price?”

It will feature UK lawyer Mark Lewis, who has represented many of those hacked by Murdoch’s News of the World (and who was followed by investigators and journalists from the paper for some time). Also speaking at the conference is Lowell Bergman, who made a documentary on the phone-hacking scandal for PBS Frontline last month. — Glenn Dyer

Front page of the day. Yesterday’s 8.6 earthquake off the coast of northern Sumatra in Indonesia caused widespread panic in that region. Thailand’s Bangkok Post today: 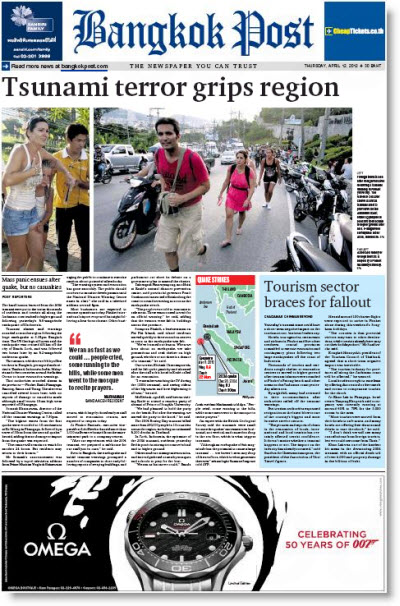 The Department of Corrections. The Australian today corrects the record:

Apple accused of colluding to fix price of e-books

“The US government has accused Apple and five book publishers of colluding to fix the prices of ebooks. A lawsuit filed in New York on Wednesday said Apple had conspired with publishers in response to Amazon’s success in selling ebooks for just under $10.” — The Guardian

“Ten Network Holdings has reported a sharp plunge in first half net profit that came in below market expectations amid tough advertising markets.” — TV Tonight

How do you prove you’re a journalist?

“How often have you, as a journalist, been asked to provide proof that you are, in fact, a journalist?” — 10,000 Words

“A few weeks ago, New York Times science and health reporter Don McNeil sent out a scathing email to colleagues attacking Times publisher Arthur Sulzberger jnr for piloting a “ghost ship” and running off to the Himalayas with a management guru while the paper founders.” — Gawker

“Reporter Ann Marie Bush live-tweeted the entire opening statements during Tuesday’s trial of Austin Tabor, a 20-year-old man charged with shooting and killing a man near Topeka West High School in 2010. On Wednesday the judge called a mistrial after discovering that Bush, who writes for the Topeka Capital-Journal, tweeted a photo of the jury.” — The Daily Dot

We are the only country in the world who believes we can have a controlled “humanitarian” intake when there are over 11,500 people seeking refuge every day.