Now in their seventh year, the Bald Archy Art Prize still itches to aggravate the art establishment with its shameless dig at the Archibald. Julia and Tony were among the winners, writes Lloyd Bradford Syke.

Now in its seventh year, the Bald Archy Art Prize still itches to aggravate the art establishment with its shameless dig at the Archibald.

The $7500 winner-take-all stash of cash has been taken, in 2012, by Allie Campbell, who may well have to hole-up in her Blue Mountains home, given the full, merciless tilts she’s made at both sides of politics, entitled A Fitting Frame No. 1 and A Fitting Frame No. 2. No. 1 features a portrait of the PM; No. 2, her arch nemesis. 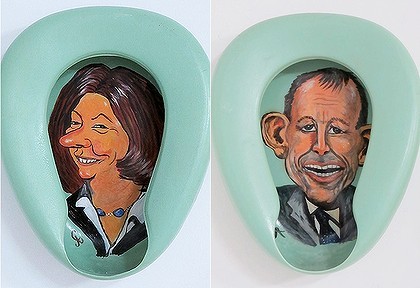 Both subjects emerge looking remarkably dignified, given they find themselves immortalised on bedpans donated by Katoomba Hospital.

Allie Campbell, the artist, recounted her approach to the facility and preparedness to purchase the vital receptacles, but noted that when staff heard of the proposed application they offered the oddball art materials gratis.

Campbell, whose former career has been as an aged care worker and art practice as a leather-worker (“I’m too old to punch holes”) is a self-taught painter whose never before entered an art competition, let alone won one.

While not the most painterly of the entries, her portraits do embody the requisite qualities of a Bald Archy winner: fearlessness; political incorrectness; audacity; larrikinism; outrageousness; irreverence.

Founder and director Peter Batey contends his cockatoo, Maude, appears to have as much expertise and perspicacity as any a arbiter on the Board Of Trustees of the Art Gallery of NSW and, since, in seven years, there’s been no refutation, it stands as “genuine truth”.

Other public figures who cop a lampooning include a Kind Henry the VIII makeover for Laurie Oakes; Murdochs, in bed with Elle; Alan Joyce; Ita; et al.

Political satire isn’t dead, as long as the Archies live.

Very good, both deserve it and both need urgent replacing