Judgment day nears in the trial of Liberia’s President Charles Taylor, who is accused of committing war crimes in Sierra Leone, writes Clair MacDougall, a freelance journalist in Monrovia.

As the judgment day nears in the trial of Liberia’s President Charles Taylor, who is accused of committing war crimes in Sierra Leone, Liberians are sitting in tea shops, sipping on hot ginger shots and eating roasted meat while talking about the heavy issue of justice for war crimes committed during the nation’s 14-year civil war.

Taylor, the former rebel leader turned democratically elected president, best known for his bands of drugged-up child soldiers who terrorised Liberians, stands charged with 11 counts of war crimes and crimes against humanity and other serious violations of international humanitarian law committed during Sierra Leone’s civil war from 1996 to 2002.

The Special Court for Sierra Leone, a hybrid domestic and United Nations court was established in 2002 to try “those who bear the greatest responsibility” for war crimes committed during Sierra Leone’s brutal civil war that left scores of people maimed and with missing limbs. Yet no one has been held accountable for atrocities committed during the Liberian civil war that killed more than 250,000 people.

In atai houses or small tea shops across Monrovia, where men meet to discuss politics, the Taylor trial verdict that will be handed down on April 26 is a topic of fierce debate among both the former president’s critics and supporters. Many Liberians argue that the trial is political and Taylor is being singled out by the international community, while faction leaders who played key roles in Liberia’s two civil wars walk around free and even occupy senior government positions.

In one of the most established atai houses on Carey Street in downtown Monrovia, patronised by young professionals, students and unemployed men, opinion is divided on whether Taylor will and should be found guilty. 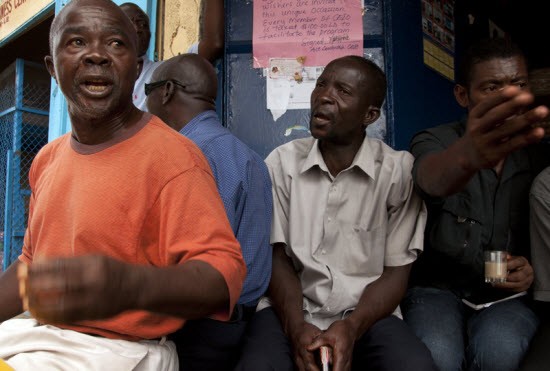 Nathan F. Gull, a stocky 33-year-old businessman and public administration student, sits crouched on a wooden bench, dressed in pinstriped pants and a pressed checked shirt and holds a black folder in his right hand. We talk about the possible outcome of the trial over cups of tea served in tiny glass tumblers.

“The case is more political than legal,” Gull says adding that he thinks there is not enough evidence to convict Taylor.

While Taylor still enjoys a significant amount of support throughout the nation, many people in the atai shops in Monrovia say Taylor should be tried for war crimes in Liberia.

Like many of the men seated on the benches around him, Gull criticises the culture of impunity in Liberia, a country in which ex-faction leaders and people who were deeply involved in the war militarily and financially hold senior government positions.

“The whole process is partial, Charles Taylor alone has been singled out by the international community,” Gull says. “But what has happened to the others like George Boley, Sekou Damate Conneh and Alhaji Kromah? All of these top rebel leaders are walking free. We see some of them in the Senate and the House of Representatives, so why only Taylor?”

Like many Liberians, Gull is disappointed with the outcome of the Truth and Reconciliation Commission that investigated more than 20 years of civil conflict in the country reported on gross human rights violations that occurred in Liberia between January 1979 and October 2003.

Liberia’s Truth and Reconciliation Commission released its final report in 2009 recommending more than a hundred people for prosecution for war crimes and crimes against humanity and that 50 people be barred from politics for 30 years because of their alleged associations with warring factions, a recommendation deemed unconstitutional by the Supreme Court. Among those to be banned from politics was President Ellen Johnson-Sirleaf, the current and sitting president at the time, who sent money to Taylor early on during the war claiming she did so “to challenge the brutality” of the late president Samuel Doe’s regime. Many analysts argue the indictment of powerful members of the political establishment, such as Sirleaf, has been the main reason the report appears to have been shelved and its more punitive recommendations ignored.

In the Modibu Tea Shop, further down Carey Street, university students sit and drink atai before class. Under a tin roof, wooden benches are lined up in front of tables covered with mouldy patterned plastic tablecloths. Al-Jazeera blares on a grubby television screen jammed into a high corner outside of the building. People watch the television as news about the Senegalese elections airs.

The handful of university students at the tea shop openly express resentment towards Taylor, who they say is responsible for the war that delayed their education and almost robbed them of their future.

Prince F. Gibson jnr, a 24-year-old student activist dressed in a lemon shirt and fashionable dark denim jeans, says that that Taylor will and should be found guilty.

“Students were kidnapped and taken to the battlefront,” says Gibson. “I can see Taylor’s behaviour here and attribute it to Sierra Leone.”

Gibson, who currently studies management and accounting and conflict resolution, speaks about Taylor with pointed bitterness.

“The young people were used as a means of accomplishing and objective,” Gibson says. “I think that Taylor should be punished for what he did.”

A 28-year-old, Chris Samukar, a small man dressed in jeans and a pale green shirt, is in no rush to get to class. He recently dropped out of an accounting degree because he could not afford the tuition.

“The trial should be free and fair,” he says. “I would love for Taylor to be tried here in Liberia, not only him, but all the warlords. A lot of people who committed atrocities are still in government. If we keep on seeing them up there and enjoying, it will not be a good thing for us. It would not be a good thing for my son and daughter. If they see these people they will think they should do the same thing.”

But not all of the students agree that prosecution of key players in the war is the way forward for Liberia.

Abraham Dulleh, a 28-year-old sociology student, argues that Liberia must get beyond the past and focus on the nation’s current developmental challenges.

“As a nation we have been through a lot,” says Dulleh. “We think that bygones should be bygones because we need to develop this country if we are to move forward. We need to get back the things that we lost during the war. Even if you arrest all of the warlords and put them in the chair it wouldn’t make me have my school fees; it will not provide me with food or anything.”

While many of tea drinkers and members of the atai societies I spoke with said they would like to see Taylor prosecuted in Liberia, there are others who would rather see him return to Liberia and again ascend to the presidency.

In West Point, Monrovia’s largest slum, made up of rusty zinc roofs and narrow lanes and edged by swampland, Taylor has a significant amount of support among the locals but is also a divisive figure.

Romeo D. Johnson, 28, a tall, slim man wearing a faded T-shirt with the photograph of presidential candidate from last year’s election, carries a small grey beat up radio with earphones wrapped around it in his right hand. He has been following developments in the trial over the past three years and will be listening to the radio at 11am on April 26, when the verdict will be handed down.

Johnson supports the TRC and thinks that war criminals should be prosecuted, but does not consider Taylor to be responsible for crimes in Sierra Leone or Liberia. Like many Liberians who support Taylor, he refers to the lower prices of basic commodities he enjoyed under Taylor’s regime.

“I like Charles Taylor because he made things easier for the commoners when it came to basic commodities,” says Johnson. “Prices were down, but under this regime prices are skyrocketing on a daily basis.”

For Johnson, Taylor wasn’t given a chance to prove himself as a good president when he was elected in a landslide victory in 1997 because new factions formed in neighbouring Guinea and Côte d’Ivoire continued the war.

“Charles Taylor was a good president based on the constraints that we had,” Johnson says. “Charles Taylor wasn’t given the chance. He came to power in 1997 and in 1999 we started hearing about the rebel insurgency and his hands were tied.”

Taylor is a figure who still looms large in Liberia’s political imaginary, but his trial is reigniting a debate in Liberia that stretches beyond his actions – who is responsible for a war that almost destroyed Liberia and how they should be held accountable?

*Clair MacDougall is a journalist based in Monrovia, Liberia. She writes and blogs about West Africa at North of Nowhere and more of her writing can be found here. Clair writes a weekly column called The Intellectuals on the major topics of debate in Liberia’s atai shops.