How much does a graduate journalist earn? Elizabeth Redman did some digging to find out that most start on $35,000-$47,000, with those at rural jobs at the lower end. Plus other media news.

Journo graduate: what am I worth? I’ve been job hunting over the last few months and some of the editors who have interviewed me have asked how much I would expect as a starting salary. For example, at the end of last year an editor from a fairly fancy, corporate-sounding organisation asked that question. I didn’t know what to say. Should I have increased the figure based on the fact that I would have needed to move interstate to work for them? Or should I have kept it low to show I wasn’t grasping? In the end, I avoided answering.

Much later I realised that I needed to know the industry standard to have a professional conversation with prospective editors about it. I emailed about two dozen people I knew who had a graduate job or had had a graduate job in the last few years. I felt awful asking but most people were super helpful. I’m not going to break their confidences and reveal individual figures (sorry if you read this far in hope) but here is some aggregated information …

Almost every journalist I spoke to started on a salary between $35,000 and $47,000 a year, plus superannuation. Some of the more prestigious positions are towards the upper end of that bracket, like you might be able to guess, or figure out from very clear job ads. And if you follow this kind of thing, you already know that in some cases the journos who get those “graduate” jobs (eg: at the ABC) already have a couple of years’ experience under their belt.

But there are also companies I’d fall over myself to work for that paid their graduates somewhere within the lower end (which no-one was complaining about). Jobs at country newspapers/broadcasters were often at the lower end too, but I guess rent is cheaper in smaller towns anyway. — Elizabeth Redman (read more at her blog Cut The Page)

Front page of the day. The Sun continues its proud tradition of not inflaming racial tensions in the UK while maintaining its record in not sensationalising the news: 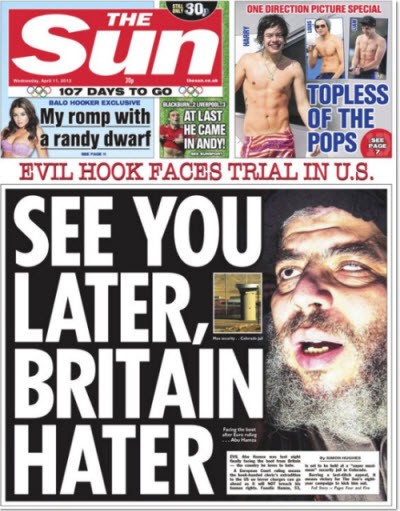 The Department of Corrections. Who are you? Not Pete Townshend. The Guardian corrects the record for mistaking one of the UK’s greatest musical maestros for fellow Who band member and accomplished bassist, John Entwistle. And it’s usually the bassist who goes unnoticed … 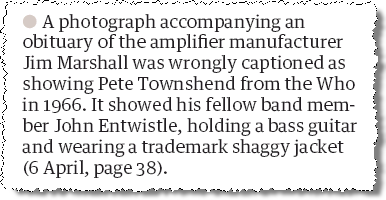 Iran expected to permanently cut off internet by August

“Millions of internet users in Iran could soon be permanently cut off from the web, social networks, and e-mail.” — CNET

“Advertising revenue in Australia’s largest radio market has fallen by nearly 10% for March this year as compared to March 2011.” — mUmBRELLA

The journalist Assad made into a martyr

“They buried Ali Shabaan as a martyr-reporter yesterday, another journalist of the Syrian war to die in action — but a Lebanese this time, unknown in the West but loved in his little south Lebanon village, not least by the girl to whom he was to have become officially engaged this Saturday.” — The Independent

“Emmy Award winner Anthony LaPaglia will play a detective tracking a young Julian Assange in an upcoming film that focuses on the WikiLeaks founder’s early forays into internet hacking.” — Mashable

Publishers lost $27 in print for every digital $1

“The Pew Project for Excellence in Journalism generated gasps when it reported that newspapers are losing $27 in print advertising for every $1 of digital revenue that they gain. But the situation is even worse.” — Reflections of a Newsosaur

“It seems nobody is ready to bet against the unstoppable momentum of Apple’s share price. On Easter Monday, the Nasdaq-listed stock rose $US2.50 to $US636. It has climbed 17 per cent in the last month.” — Australian Financial Review

Adu Hamza is the one stirring up racial tensions, not the Sun.