Craig Thomson in the news, with a bullet

The Craig Thomson issue which continues to suck up much of the political oxygen.

Prime Minister Julia Gillard rules the roost again this week, in spite of her ongoing silence over the HSU scandal and the Craig Thomson issue which continues to suck up much of the political oxygen. Thomson races to third on our list, matching the media attention he received last August when the Government first battened down the hatches over speculation surrounding him.

Shadow AG George Brandis was among our prime movers for the scorn he poured on the Fair Work Australia investigation, stopping just short of accusing the ALP’s Industrial-Relations-Commission-replacement of obstructing justice. He was joined by NSW Labor leader and former Unions NSW chief John Robertson who called for HSU national president Michael Williamson’s scalp. Opposition workplace relations spokesman Eric Abetz focused instead on the ACTU, suggesting it had motives other than stamping out corruption in suspending the HSU.

None of which stopped Treasurer Swan edging closer to delivering the budget surplus we had to have or the oft-overlooked fact that the PM again beat Tony Abbott in preferred prime minister polling. Crystal ball, anyone? 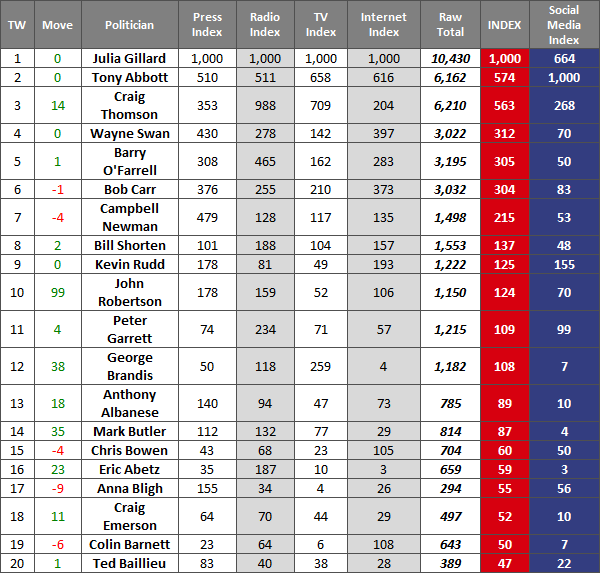 The most salient takeaway here is that Kevin Rudd as a talkback radio topic continues unabated.

Racism in sport is clearly the issue here but there’s a further lesson surrounding the use of social media. Together, much like Polis’ self-assessment, two and two make five.

What is becoming apparent with the passing of time, is the number of Labor party team players who are willing to reveal just what they know which makes Craig Thomson and Michael Williamson such stand out Labor team players. Players such as John Della Bosca, John Robertson, Peter O’Toole. Edward James