Guest post by Lisa Dempster In November 2010 I landed in Sharjah – a place I had not known existed until two months earlier – and several hours later I was sitting in a grand reception hall watching its International Book Fair being opened by one Sheikh Dr Sultan bin Mohammed al Qassimi. The room […]

In November 2010 I landed in Sharjah – a place I had not known existed until two months earlier – and several hours later I was sitting in a grand reception hall watching its International Book Fair being opened by one Sheikh Dr Sultan bin Mohammed al Qassimi. The room was opulent and bustling, and I sat at a large table with many strangers, wearing headphones through which the Arabic ceremony was being translated into English and wondering why no one was eating the lavish banquets arranged on each table. Only two things were certain: I was in a room with actual royalty, and I was a long way from home.

Over the past few years I have been lucky enough to visit several international literary festivals through my work as Director of the Emerging Writers’ Festival. I’ve been inspired, had some life-changing moments, made a lot of warm and wise new friends, and felt hopelessly out of my depth on more than one occasion. And I’ve discovered the unique joys of being a literary tourist.

I love the term literary tourism. It’s not a phrase that is used very often – I guess it doesn’t sound particularly sexy on a travel brochure – but it excites me because literature and travel are two of my favourite things. Where some lit types travel to visit settings in a favourite text or make a pilgrimage to an author’s birthplace, my favourite bookish destinations are festivals.

Just like literature expands the mind, travel opens it. For me, the combination of both is intensely rewarding. Liberated from everyday routines, I tend to go into a state of hyper-receptiveness. Free from the usual at-home motions of work and play, there is more time to engage deeply with a literary festival – to listen, to talk, to think. To write.

Last week, I walked the halls of the Abu Dhabi International Book Fair, once again a literary tourist in a foreign city. Just like shopping, eating or sightseeing abroad can reveal a lot about a place, so too can its literary culture. The reflection of local customs, traditions and character make lit festivals interesting for the bookish traveler. But while the events, protocols and setting are excitingly different, the people there tend to be comfortingly the same – writers, publishers, readers. Book people.

My first international literary jaunt was to Edinburgh International Book Festival two years ago and it was a mind-blowing experience being at a festival in another country, even one I feel culturally at home in. It was so similar yet so different to events in Australia. Same format, different writers. Same topics, different discussions. Same structures yet totally different atmosphere. And while the cultural differences are much wider at book fairs in the Emirates, the similarities are there too. It’s this familiarity that makes these international literary adventures so compelling; feeling secure within the familiar framework that is the literary festival leaves the mind free to wander in exciting new directions.

As a writer and reader, global literary events are just as relevant as the ones back home. Each festival discusses its own local issues while tapping into broader themes in the region and across the globe. For example, themes that arose from Abu Dhabi Book Fair this year included the importance of local writing, how publishing in the Arab world is developing, and how literature can help us understand the world in which we live. While every literary festival is a reflection of the unique culture it is located in, a great festival will facilitate conversations that cross cultural boundaries and appeal to a global audience.

Organisers of literary festivals understand the importance of this global perspective, which is why they bring in writers from around the world to their events. (Good directors will ensure there is cultural diversity as well.) I have been to many festivals in Australia where the interstate and international guests have sparked some remarkable discussions, and through these writers had my eyes opened to global issues and debates.

Leaving your local literary environment and experiencing those conversations through the lens of another country or culture can be both outrageously inspiring and profoundly moving. At the very least, you will discover a wealth of new literature and writers, voices that may not yet have travelled far outside their own countries – and for a literary type, that is worth travelling for.

Lisa Dempster is the Director of the Emerging Writers’ Festival and author of Neon Pilgrim. She blogs at Everyday Adventure. 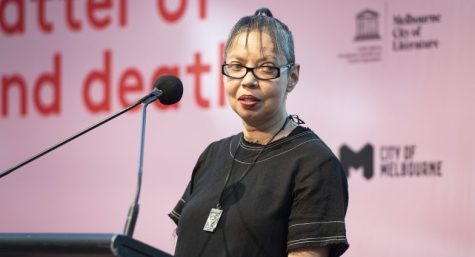