Retired right-wing cartoonist Larry Pickering has portrayed Julia Gillard as a dildo-wielding rapist in a cartoon on his website. Plus other media news of the day.

Schooling Henderson on Green politics. Bob Brown believes in interplanetary colonisation! Yet the left-liberal media won’t call him on it! Gerard Henderson has a scoop! Or thinks he does. In this week’s column, Gerard focused on Brown’s recent speech arguing — as he has for years — that the challenges to humanity will only be solved by a single world government, a speech he began with the wry greeting “fellow Earthians”. But there was more! According to Gerard:

“According to the Greens leader, ‘to accommodate 10 billion people at American, European or Australasian rates of consumption we will need two more planets to exploit within a few decades’.

“Earlier this year, in the US, Republican presidential candidate Newt Gingrich was ridiculed by the left when he proposed the creation of a permanent base on the moon by 2020. However, in Australia there was almost a mute reaction to Brown’s speech.”

If the opposition had called for the settlement of Mars, Gerard went on to say, “[he] he would be dismissed as having lost it … But Brown tends to avoid criticism.”

Yeah, um, Earthians to Gerard. Amazingly, Brown wasn’t calling for the establishment of Star Fleet One. He was arguing that the planet simply can’t accommodate Western levels of consumption for everyone — so to have a just distribution of resources, and avoid global war, we’re going to have to consume less. The media didn’t go to town on Brown’s secret galactic plans because they read the sodding speech, and understood it in context. Equally amazingly, no one has come out to condemn Jonathan Swift’s shocking cannibalism proposals either.

It’s hard to know which is more bizarre about Gerard’s self-gotcha — his total lack of understanding of Green politics, or the fact that he’s never heard the “two more earths”, which has been around for years. Here’s the first page of Google results — or, as you know it Gerard, The Google —  for a search on “we would need two more Earths”: 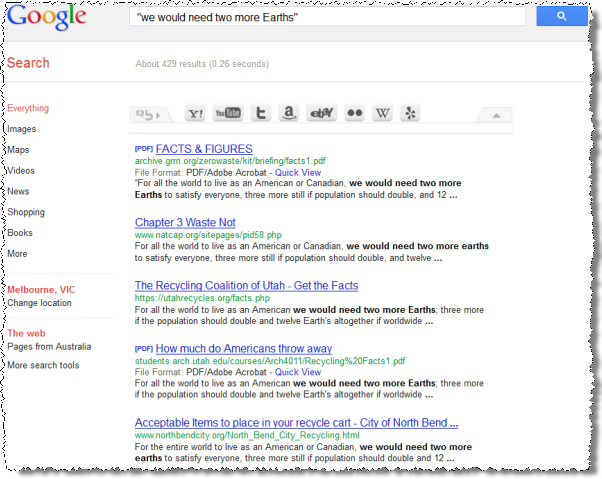 Oh dear. Anne, please show Gerard how to find the Google via Gopher on his Commodore 64 before he once again embarrasses himself — and the one newspaper still willing to publish him. — Guy Rundle

Once upon a time, Age lifts a Hun video. According to this review on The Age website of  the new film starring Julia Roberts, Mirror Mirror:

“… an expansive and overworked version of the Snow White fairytale, tries for the same effect in a live-action setting and never quite succeeds.” 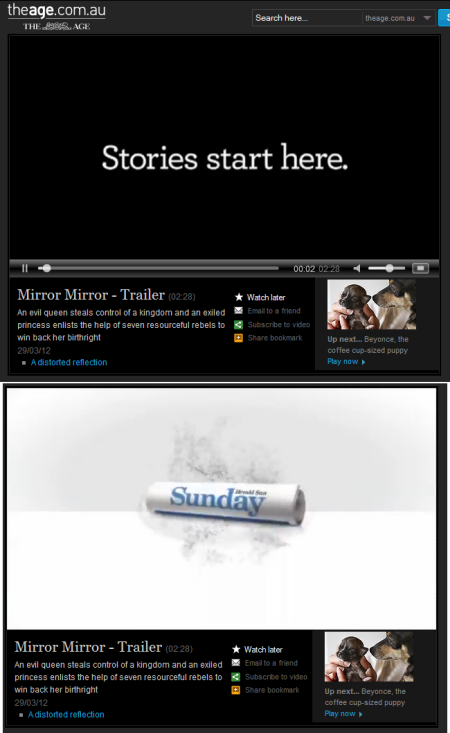 Who’s the fairest of them all?

Front page of the day. It looks all but certain that Mitt Romney will get the nod as the Republican candidate to take on Barack Obama in November’s presidential election after impressive wins in the Maryland, Washington DC and Wisconsin primaries. Maryland’s Baltimore Sun called it a clean sweep: 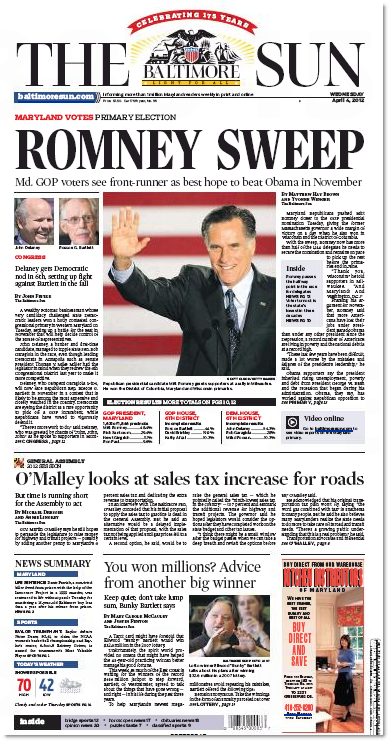 “Two key crossbenchers have questioned the government’s bungled handling of the $223 million Australia Network tender, with Andrew Wilkie branding it a ‘shambles’ and Rob Oakeshott flagging that his parliamentary committee could further investigate the Auditor-General’s damning findings.” — The Australian

“New ASNE (American Society of News Editors) figures show that the percentage of minorities in newsrooms is now 12.32 percent. The share has dropped about a percentage point since ASNE’s 2010 census.” — Poynter

New York Times journo lives like a billionaire for a day

“Just imagine the audacity it took for The New York Times‘ Kevin Roose to propose a story in which he lives like a billionaire for a single day. Then imagine his joy when editors actually approved the story.” — The Atlantic Wire

What journalism can learn from Moneyball, Billy Beane

“One must be careful not to overplay the similarities between the worlds of baseball and journalism. But I’ll risk it.” — Forbes