Retired right-wing cartoonist Larry Pickering, popular during the 1970s, has portrayed Julia Gillard as a dildo-wielding rapist in a cartoon on his website.

Retired right-wing cartoonist Larry Pickering has portrayed Julia Gillard as a dildo-wielding rapist in a cartoon on his website. The illustrator, popular during the 1970s, continues to claim to be “Australia’s most political and notorious cartoonist”, although his solitary shtick appears to have been drawing public figures with genitals. Pickering has faded from view in recent years, and most recently hit the headlines courtesy of a fraud probe relating to a sports betting organisation.

In two cartoons on his website, Pickering shows Gillard wearing a strap-on d-ldo. One cartoon from a week ago shows Gillard apparently trying to charm Campbell Newman, accompanied by a figure that, judging by the comments, is intended to be Bob Brown, although it’s hard to tell (it looks more like former right-wing senator and Treasury Secretary John Stone than Brown). “You’re a naughty boy, Larry,” says one commenter, in between misogynist abuse of Gillard. “Maybe Gillard in this caricature + Brown & the usual Union suspects with Australia on the ground in a rape scenario,” another commenter urges Pickering.

Pickering appears to have taken up the inspired suggestion, because this week he portrayed Gillard — who has been on the end of a series of misogynistic abuse from anti-carbon tax protesters over the last year — about to anally penetrate a man strapped face down to a surgical table aided by Wayne Swan and Greg Combet, with the suggestion “it will help cool the planet”. Gillard is called a “c-nt” in the comments below the cartoon.

Pickering has fans at right-wing website Menzies House, which ran one of his cartoons this week but who appear to have found portraying the PM as a r-pist too much, sticking with the more pedestrian “flogging a dead horse” theme. 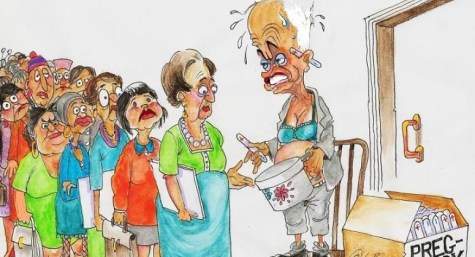 Why did The Australian soft-pedal Larry Pickering’s anti-Semitism? 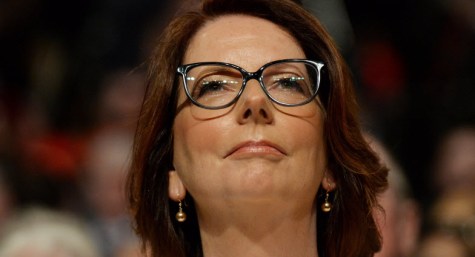 No matter how many questions, the campaign against Gillard will never end

Ah yes the wit… the cleverness of it all. There are some deeply ugly people out there.

Welcome back Bernard. I would venture to suggest, in jest, that some of us have missed our ‘whipping bouy’.
I think the above should be listed under”the need to know” category.

and listed under the government “D” Notices

They allowed him out on day release unbeknownst to senior staff. The vile and subversive material produced will ensure Mr Pickering is firmly strapped back into the jacket and left to live out his remaining days with the occasional scotch finger and cuppa on the terrace.