The Grim Reaper II: do gay men need to be scared?

In April 1987 I had just turned six. I was far too grown up for Play School, and my television memories from this time are Mary Delahunty reading the ABC new … and the Grim Reaper. Quite a contrast — Mary was much better coiffed and dressed. But I loved the Grim Reaper ad, too. It […]

In April 1987 I had just turned six. I was far too grown up for Play School, and my television memories from this time are Mary Delahunty reading the ABC new … and the Grim Reaper. Quite a contrast — Mary was much better coiffed and dressed.

But I loved the Grim Reaper ad, too. It was by far the weirdest thing I’d ever seen;  I found it thrilling — a mini horror movie before. 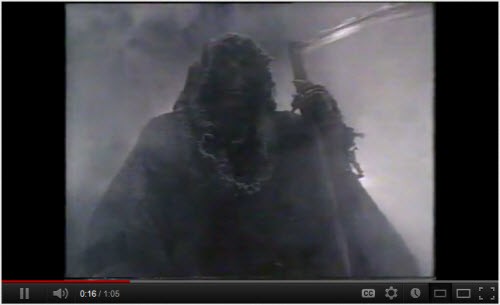 The iconic campaign was developed by ’80s ad man Siimon Reynolds for the then-National Advisory Committee on AIDS.  It turns 25 this week.

At six, of course, I had no idea what the ad was about. In the years to come I received comprehensive, whole-of-school s-x education, including contraception — all at Catholic schools. I’m guessing the apocalyptic tone of the ad scared the parents and teachers in our school community enough to cut through traditional barriers.

In 1996, the year I came out to myself as a gay man, a team led by Dr David Ho announced the discovery of effective combination therapy. This effectively ended the AIDS crisis in the developed world. It marked a shift in thinking from dying of AIDS and living with HIV. For his troubles, Time made Dr Ho its Man of the Year, and for everyone not in a risk group HIV faded from public view.

In my late teens I thought everyone should just use condoms until the last person with HIV died out. Using condoms came easily to me, so I couldn’t see how could it be so hard for everyone else. Then I dated a lovely man, safe s-x all the way, and after we broke up, in the middle of a fight, he told me he was positive. Seeing his pain up close really shook me up. It changed how I think about safe s-x — from a strategy of self-protection to a way of living with others in a mixed status community.

In 2004 I began work as a health educator at the Victorian AIDS Council. The agency was under intense pressure and it was not a happy place to work. Since 2000 there had been small increases in the number of new diagnoses each year. In mainstream and gay media outlets, commentators claimed prevention was failing and laid the blame on the AIDS council.

Against the evidence they suggested it was reckless young gay barebackers who were getting infected. Activists who had protested the Grim Reaper campaign could now be heard calling for a new fear campaign to scare these young men into taking HIV seriously. That was the Reaper’s first legacy, in my view: a new sense of crisis occasioned a new call for fear appeals.

Herein lies the dirty truth about fear campaigns: people want them, but only to scare ​other people. Asked if they find the ads frightening or persuasive ​themselves​, they demur.

A synthetic meta-analysis by Kim Witte and Mike Allan in 2000 showed that actually inducing fear is a tricky business. If audience members are genuinely frightened and doubt their ability to avoid the threat, they react with denial and avoidance, not behaviour change. The approach backfires among the people who need it most.

The Reaper’s second legacy lay in the odd locution, “always use a condom — always”. In fact, even as the ads went to air, researchers on the Social Aspects of Prevention of AIDS study were collecting data that would show gay men using HIV testing in relationships to make sure both partners had the same status before they stopped using condoms.

Risk reduction strategies like this one aren’t perfect, but their partial protective effect is well established in research, and they help bridge the gap between the ideal of 100% condom use and reality. Commentators demanding a return to condom reinforcement by fear campaigns overlook the simple fact that, at the height of deaths from AIDS, gay men still had unprotected s-x — for intimacy, love and community.