Those Titanic buffs really like to sink a good story, if this correction in The Guardian is anything to go by. Plus other media news of the day.

Department of Corrections. Those Titanic buffs really like to sink a good story, if this correction in The Guardian is anything to go by: 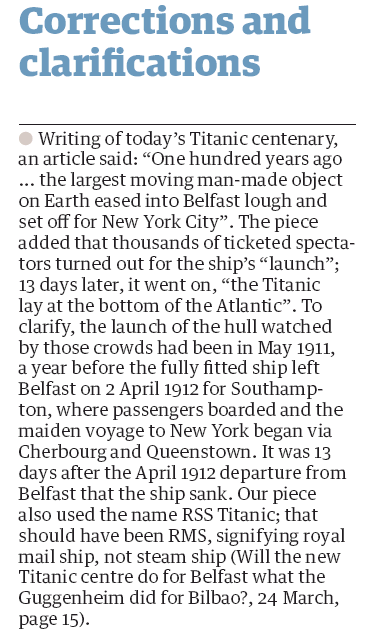 But it’s not just boat nerds who are insistent that the Titanic story gets told faithfully. Director of James Cameron’s Titanic recently explained how he only changed one shot in the new 3D release of the film after criticism from Titanic watchers. He told Culture magazine:

“Oh, there is one shot that I fixed. It’s because Neil deGrasse Tyson, who is one of the U.S.’ leading astronomers, sent me quite a snarky email saying that, at that time of year, in that position in the Atlantic in 1912, when Rose is lying on the piece of driftwood and staring up at the stars, that is not the star field she would have seen, and with my reputation as a perfectionist, I should have known that and I should have put the right star field in.

Front page of the day. A powerful front page from the San Francisco Chronicle as it reports on the shootings at a nearby Oakland university. 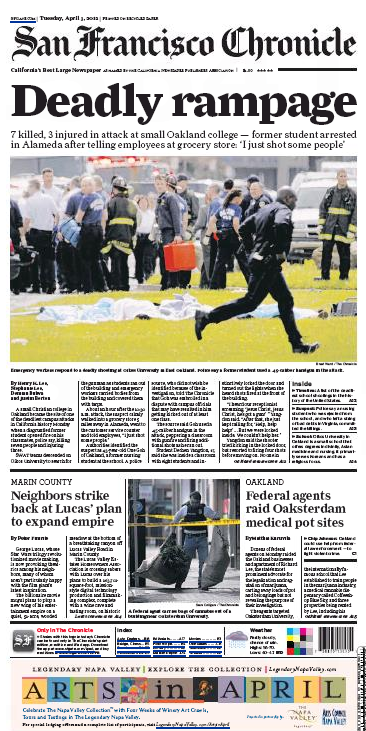 “According to sources close to the situation, Yahoo’s massive round of layoffs — which is likely to impact up to 2000 employees — is just the tip of the proverbial iceberg that will hit the storied Silicon Valley internet giant in the company over the months to come.” — All Things D

Q&A gets even more annoying

“Next Monday night ABC will trial a new social media application that allows viewers to vote in real time, with results being incorporated into the show while it is on air. iPowow enables voting on smartphones and tablet devices. Unlike 1902 phone voting, the usage by the viewer comes at no cost and the results can be tallied second by second on screen … ‘It’s like The Worm,’ said Arul Baskaran, ABC TV Controller of Multiplatform.” — TV Tonight

Google responsible for its ads

“The Australian Competition & Consumer Commission successfully appealed a ruling handed down last September in the Federal Court that found Google was not responsible for search engine ads that directed consumers to rivals of the companies they were searching for between 2006 and 2008.” — The Australian

An all online university?

“Minerva will be a virtual school, though it will encourage students to live together in dorm clusters around the world. It doesn’t plan to offer introductory-level classes — students will be expected to go to community colleges or take online courses to get up to speed.” — All Things D

Read all about a solar-powered Kindle

“SolarFocus, an Asian solar panel maker, is going to be shipping their second Kindle cover in a couple weeks. This one is built just for the Kindle Touch, and it includes an LED light, battery, and a solar panel, boasting that their cover can charge the Kindle Touch and that it offers a 3-month-long battery life. ” — MediaBistro

Meet Titanic II: everything you need to know about Clive’s ark

“Queer and Annoying” – so what happens if you don’t have “the necessary equipment” to vote?

Q&A gets more annoying…not to mention dumbed down. Just what we need, more piffle polls.

Is it so wrong of me to hate this already?

Yay Q&A, to become even more pointless! Let’s have more political hacks talking at each other, and we can vote on it! woohoo! PAAARRRRTTTTYYYY! It screams “fun” at me!