Conroy the big mover in a week of poor polling

Plenty of upward movement this week as ALP ministers moved to diffuse the damage caused by poor polling .

Plenty of upward movement this week as ALP ministers moved to diffuse the damage caused by poor polling and focused on policy; announcements on tax, manufacturing, education and infrastructure were capped with interest rate speculation that sets all eyes on Treasurer Wayne Swan’s budget next month and the irony in the notion of a painful surplus.

Communications Minister Stephen Conroy heads north on our list as controversy surrounds big ticket tenders ” the decision to prevent Chinese telco Huawei from tendering for NBN projects (and an aside with NBN radio ads pulled after on-air hosts prefaced live reads with negative commentary) and government compensation for Sky News having had its application to run The Australia Network aborted in favour of Aunty. 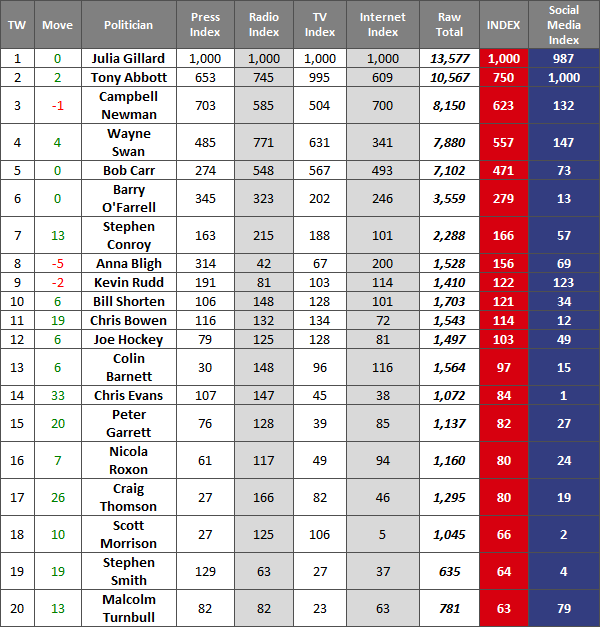 Tony Abbott reigned the interwebs this week but met resistance on the airwaves, succumbing to the Golden Tonsils in admitting his paid parental leave scheme is a tax.

Rising from two decades under house arrest to win her by-election brought a little extra hope to the free world. Go “Lady” go.