Rann rips into The Australian. Former premier Mike Rann has let fly at The Australian for its supposed “beat-up” style of journalism. In a speech last night at Flinders University — available in full here — Rann criticised “desperate journalists” at the newspaper. “They try to be amateur political players themselves or, at worst, twist their story and sometimes even their quotes in order to get their ‘beat-up’ into the paper,” he said.

The former premier’s remarks are reported today in The Australian Financial Review, which received an advanced copy of the speech. Rann, who was recently appointed a professor in the university’s School of Social and Policy Studies, said News Ltd had an “unhealthy” dominance of the media landscape in South Australia. He said The Advertiser had “fallen into the entertainment or anger trajectory”, but “worst of all, in the eyes of many from my side of politics, is The Australian“: “Unfortunately, its editorial line sometimes infects its reporting of politics. Even worse, there are examples where political bias and distortion collide in a toxic cocktail which has nothing to do with real journalism.”

Rann said the vast majority of journalists and politicians were “decent and honest professionals”. However, he thought reporters were now under increasing pressure to “beat up and simplify stories about important issues in order to attract attention rather than provide insight”: “The consequences of this continuous downward spiral are even worse for the public, not just in terms of limiting sensible debate on serious issues.” — InDaily

Property competition on Sunny Coast. The retreat last month of News Limited from the Sunshine Coast media market has paved the way for a renewed eyeball assault from the last remaining mainstream newsprint outfit, APN, and upstart locally-owned competitor My Property Preview. In a quiet launch last Friday, the brains behind MPP, Michael Kramer, pushed the go button on a new Antony Catalano-aping masthead — My Weekly Preview  — six weeks ahead of schedule.

My Weekly Preview, part-owned by coast real estate agents, will hit 62,500 letterboxes on Fridays in an attempt to shirtfront APN’s key Saturday edition of the Sunshine Coast Daily in the real estate ad market. The Daily‘s main edition has suffered severe circulation declines of more than 10% to 26,288, while the APN-Fairfax joint venture Domain — inserted into the APN’s local weeklies — has a combined distribution of 74,000.

The new Kramer title was set to launch in May, but News’ decision last month to shutter its Quest newspapers in Noosa, Caloundra and Maroochy and its Weekender insert expedited the rollout. Kramer says the new title will expand into news and investigative features that may well provide a fillip for struggling coast freelancers.

APN is currently being investigated by the Australian Competition and Consumer Commission over cut-price real estate ads that saw discounted deals being allegedly flogged in its midweek Domain joint venture with Fairfax Media at below the cost of the newsprint. Since then, APN has jacked up its “liftover rate” — which gives ads booked in the Saturday Daily an extra push in Domain — by about 100%, possibly in response to News’ withdrawal. — Andrew Crook

Bailey makes Sly play for worst media boss. Is Trinity Mirror CEO Sly Bailey the world’s most under-performing media executive? According to London media reports, Sly Bailey, the CEO of Trinity Mirror, which publishes the Daily Mirror and People, plus other publications, was paid £1.8 million in cash, shares and pension contributions in 2011, down from £3.3 million in 2010.

Under new proposals announced in London overnight, Bailey’s short-term incentives will be cut by £500,000 under proposals to be put to the vote at the newspaper group’s annual general meeting on in early May. However, her long-term bonus will be increased by a similar amount, and Bailey’s base salary of £750,000 remains unchanged.

Bailey has been paid £14 million in her nine years as the company’s CEO. Trinity Mirror’s share price has fallen so far that it is no longer even part of the second tier, the FTSE 250 index of listed companies. Since she became CEO in 2003 the company’s market value has plunged from £1.1 billion to just £97 million now. By that measure she is the world’s worst currently serving media executive. — Glenn Dyer

Front page of the day. The Daily Telegraph‘s Front-Page-Photoshop-Unit has done it again. Here’s today’s effort: 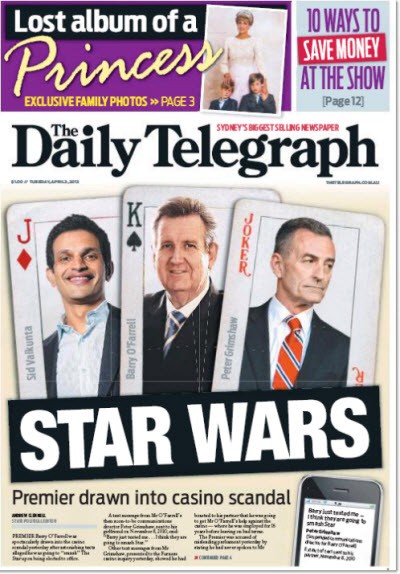 US reports SBS exclusive — but ignored by locals

“Last week SBS Dateline presenter Yalda Hakim broke an international story following the massacre of 17 Afghans by a rogue US soldier. The Dateline report has been played in full on international media including CNN, CBS, NBC, FOX News and Al Jazeera. The Pentagon has denied any other soldiers were involved. Despite the magnitude of the her investigation, SBS says no other Australian media have reported the news.” — TV Tonight

“Derryn Hinch has done it again. He’s named a convicted paedophile in a move that could see him jailed for contempt of court.” — The Daily Telegraph

The 100 outstanding journos of the last 100 years

“In March 2012 the faculty at the Arthur L. Carter Journalism Institute at New York University, together with an Honorary Committee of alumni, selected ‘the 100 Outstanding Journalists in the United States in the Last 100 Years’.” — New York University

“Christian Brothers Investment Services (CBIS) has filed the petition ahead of the media giant’s annual general meeting in October, in a signal that the row over corporate governance at News Corp will continue to rage into the autumn.” — The Telegraph

“The concerns emerged as the data protection watchdog pressed for new safeguards to protect individuals’ privacy from the proposals. Internet companies have told the Guardian that the government’s plans to monitor email and social media use by the British public could be used by autocratic regimes to justify state surveillance.” — The Guardian

“Google has acquired TxVia, a payments technology company. In a blog post, Google disclosed the purchase but did not reveal the terms. The New York-based company was working on a number of payment technologies, including prepaid and gift cards.” — All things D

Thankyou Crikey for letting us know it was SBS that broke the story of the child witnesses – I had no idea! Still, it is a little ironic Crikey didn’t give the TV Tonight article more prominence on this page.