Labor could be cycling toward its doom

The same pattern keeps repeating: a party wins government federally at the high point of its fortunes, then the tide starts to run out again and it loses seats at state level until eventually it loses federally as well and the cycle starts again.

I remarked yesterday on the way pundits keep trying to interpret the polls either without any historical context, or at best trying to introduce a historical context that they proceed to get wrong. All the more refreshing, then, to read a commentator who knows what he’s talking about. Step forward Antony Green, with a fascinating piece yesterday on the cycles of state and federal politics.

Green’s graphs, going back to Labor’s low point in 1969, clearly show the cyclical nature of party fortunes. The same pattern keeps repeating: a party wins government federally at the high point of its fortunes, then the tide starts to run out again and it loses seats at state level until eventually it loses federally as well and the cycle starts again.

There’s nothing new about what’s happened over the past four years, it’s only that it’s been unusually sudden. Green’s second graph, just showing the proportion of state seats held, makes vivid, as he puts it, “how Labor’s representation has fallen off a cliff at the last two state elections.”

That certainly suggests that the Gillard government is doomed; whenever a party has previously reached that low level of fortunes in the states (Labor in 1975, the Coalition in 2006) it has lost the next federal election decisively.

But the cycle also provides comfort for Labor supporters who may be concerned that their party is beyond recovery; there are plenty of precedents for parties coming back from disaster. Green has valuable things to say about the changing nature of our political parties and their class basis, but ultimately he remains unconvinced by the argument that Labor’s predicament today is radically different to what parties have faced before. For what it’s worth, I think he’s probably right.

That’s not to say the trend always moves uniformly. Labor recovered somewhat from a trough in the late 1980s, winning the 1989 Queensland election and almost winning in 1991 in New South Wales. In an earlier period, the Coalition recovered from its low point in the early 1950s (when it was out of government in every state bar South Australia), going on to win a further five federal elections — it was saved by the great Labor split.

The historical record certainly warns against explaining election results by short-term factors — the personalities of the leaders, election campaigns, the headlines of the day. No doubt those things have some influence, but clearly there are longer-term causal influences at work.

It’s not at all clear, however, what they are. Green suggests (as have several others) that being in federal government is itself causally responsible for poor state performance: “the party in office federally clearly has a deleterious impact on that party’s representation across the country.” But I’m not sure that’s the best explanation.

I’d suggest that what’s happening is that over recent decades winning government federally seems for some reason to lag a bit behind a party’s performance at state level, so that the federal win tends to represent the high point of a party’s achievement. (This seems to be connected with the fact that close federal elections always go to the incumbent, whereas there’s no such regularity at state level.)

Ten years ago, for example, the Coalition was clearly on the nose at state and federal levels, but the “stickier” nature of federal elections meant that dissatisfaction showed up mostly at state elections. When Labor finally won federally in 2007 that was its peak, and the subsequent decline has been precipitous.

The question now is whether Labor can reverse that decline before it claims Julia Gillard. History is against it, but of course there is no precedent for anything until it’s done a first time. 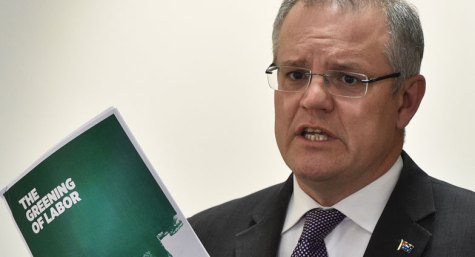 Labor Party suffering at the hands of union leaders

A perceptive an interesting observation of both you Charles and Antony.
I would like to add that Queensalnd have had a predominantly conservative bias in their governments from the second world war. The Peterson gerrymander only explains a part of this trend. I suggest that the past number of Labor Governments have been both against the trend and anomalous. I think modern history tells us that queensland is naturally conservative in its’ politics and will probably continue to be in contradiction to its’
earlier political history
The closeness of the balance of the parties in Victoria is an indication that the collapse of the labour support in NSW has some individual characteristics related to the
Sussex St influence and syndrome. This also points to an anomalous trend pertinent to NSW
Even so it is not uncommon in post ’69 political history to have a Federal Government that is not of the same persuasions as the majority of the state governments.
Prior to ’75 the DLP had a major impact on the governments throughout the nation and the rise of the Greens in replacing the Democrats is significant associated with the reinvgorated interest of the younger voters throughout the nation.
Their(Greens) distribution of prefernces may have a dramatic impact on the future of both government makeup and the dominance of the two party equation.
We could also see the development of more and more independants successfully contesting Federal seats thus requiring us to get use to minority coalition
governments from either side of politics

Wishful thinking Charlie boy and probably the only thing left for you guys to hold on to.
However, I don’t recall history throwing up results like NSW (2011) & Qld (2012) elections.
The fact is that Labor as a trademark is utterly rooted. The public know this, the Coalition know this, the media know this, the Greens know this. The only ones who don’t know this are Labor & the moronic Unions.

@Michael – well, actually, history has thrown up quite a few results like those. Labor in 1974 was reduced to 11 seats in Queensland – do you really think there’s a big difference between 11 and 8? The Liberals were reduced to 3 seats in Queensland in 2001, and 17 in Victoria the following year. Labor got down to 17 in Victoria in 1961. It happens. Everyone likes to think their own era is unique and special, but it’s usually not true.

You can close your eyes, say your prayers, meditate or simply get pissed but rest assure that life as you once knew it is over!
Labor is finished 4 ever, wether it comes back as the New Democrats, the Social Democrats or whatever else, it will never have credibility again as the Australian Labor Party.

Charles;
I am not dismissing Antony’s cyclical hypothesis but am trying to
point out there are some peculiarities and anomalies that are relevant
today that may not show up in graphs and analysis of recent past
elections.
There are some fundamental questions and challenges that are
confronting the populace in general. Our experience of the banking
meltdown (GFC), the western nations sovereign debt crisis and climate
change are questions that I think stimulate our youth. Lots of
people find these issues confronting. Over the past generations,
perhaps since the end of the second world war, we have experienced
and accepted an ever improving and more secure lifestyle and
standard of living that is now economicly and scientificly in question.
Whilst we confront these challenges and try to find solutions,it is my
contention we will experience considerable volatility that will
manifest itself in the ballot box.
The polarisation that these questions create could explain a fair
bit of the Queensland results together with the inherent conservatism
apparent in the states’ history. Admittedly the losing party had some
self inflicted wounds but there must be more to it to explain the
enormity of the swing. Traditionally a 5% or 8% swing was enough for
incoming party to form a healthy majority. Today the swings are
double that figure.