In my search for the first of the season came this from AAP yesterday afternoon...

Not quite a leadership challenge story but getting closer. In my search for the first of the season came this from AAP yesterday afternoon:

“That matter was resolved in March and we are all working to ensure the election of a Labor government,” Rudd backer Chris Bowen said.

Gillard advocate Bill Shorten agreed the issue had been put to bed.

“Some people in the media are like recovering addicts, missing out on leadership speculation,” he said.

And this par at the end of Phil Coorey’s Sydney Morning Herald page one story this morning:

The Workplace Relations Minister, Bill Shorten, said reports that he was being lined up to succeed Ms Gillard closer to the election were ”just not true”.

”That matter was put to bed. It’s been dealt with,” he said.

We are definitely getting closer to a fair dinkum sighting.

These are not figures to inspire consumer confidence. When housing prices are declining home owners and buyers get uneasy and that cannot be good for a government trying to persuade people that they are managing the economy well.

The good news from RPdata yesterday is that Australia’s housing market is showing signs of stabilising after home values rose 0.2 per cent in March. 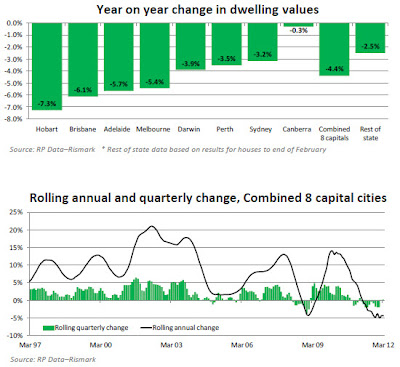 Not only has the market remained unchanged for the quarter ending 31 March 2012, it is also level with the 31 November 2011 home values across the combined capital cities. The flat result over the quarter is the strongest result since March 2011 when values increased by 0.7 per cent.

Angela Merkel gives a French election tip. I notice that the German Chancellor Angela Merkel has changed her tune about actively backing Nicolas Sarkozy in the contest for the French presidency. She is now offering to meet with the socialist candidate Francois Holland as it becomes more likely that Sarkozy is on the way to being rejected.

While recent opinion polls show that President Sarkozy now has a narrow lead when first round voting intentions are measured, he still lags well behind after minor candidates are eliminated. And as the figures from TNS Sofres show, the latest drop in first round support for Hollande is less than the increase shown for Jean-Luc Mélenchon whose party is further to the left than the mainstream socialists. 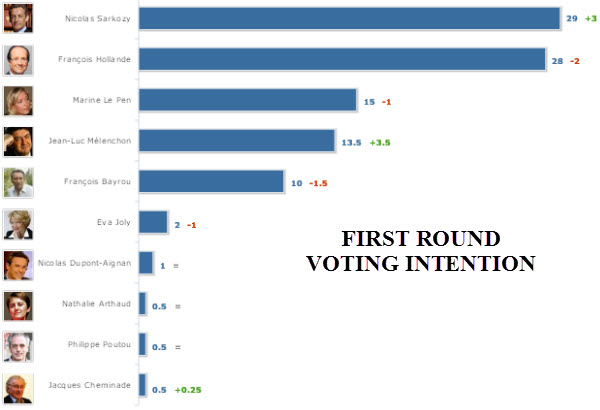 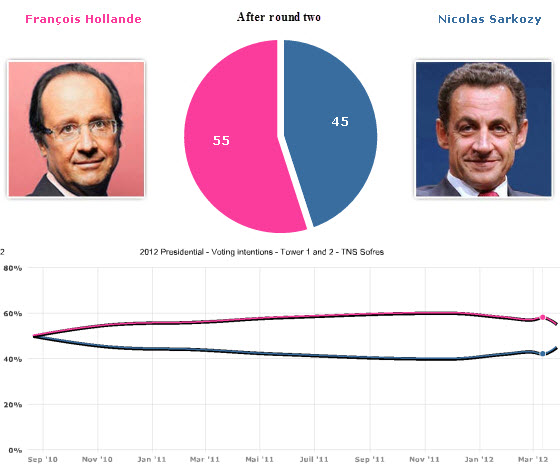 I have already invested $64.50 on Sarkozy not to win (see the details of this and other current wagers in the portfolio here) and I recommend going again at the Intrade price this morning of 60.5%.

So economic austerity works does it? The effect of the European determination to return government budgets to surpluses becomes more and more apparent. The latest Eurostat unemployment figures released tonight show: 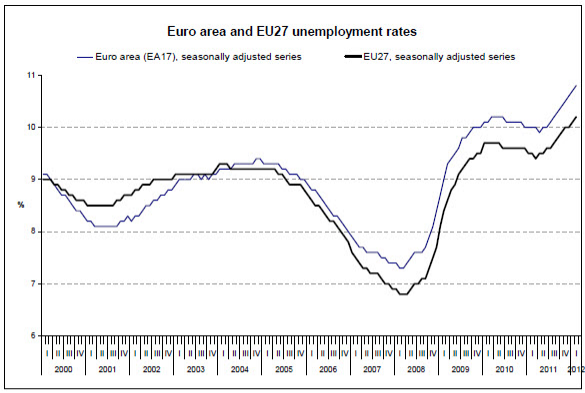 Standing still. No real joy again for shopkeepers in the Australian Bureau of Statistics retail sales figures this morning.

This February’s trend figure was up 2.5 percent on February last year. That’s roundabout the inflation rate and certainly no more. Yet again Queensland and Western Australia led the way. Turnover fell in New South Wales, Victoria, the ACT and Tasmania.

The Gillard story that won’t go away

No sure what the austerity graph is meant to disprove. I haven’t heard
anyone claim that austerity measures would lead to a rapid decrease
in unemployment. Nor would any other feasible government policy.