You can run, you can hide, but the only way you will be able to avoid an overkill of reality program launches from April 15 is if you watch SBS or the ABC and don't read a newspaper for the next three or four months.

Virtual reality onslaught on TV. You can run, you can hide, but the only way you will be able to avoid an overkill of reality program launches from April 15 is if you watch SBS or the ABC and don’t read a newspaper for the next three or four months. Five, perhaps six reality programs — ranging from dancing, to building, singing, business and egos — will compete for viewer eyeballs. It will be a real knock ’em down, drag ’em out kind of battle for the next three months or so.

Dancing With The Stars starts in the 6.30pm slot on April 15, while Nine starts The Voice that night in the 6.30pm slot. The following night Seven returns Australia’s Got Talent to its schedule at 7.30pm up against Nine’s The Block at 7pm. Then on April 18, Nine returns the second series of Celebrity Apprentice to the schedule. Ten is down to start MasterChef on April 15 as well (not quite confirmed) — a big decision for Ten, squeezed by the noise coming from Nine and Seven. To cap it all, Nine has the Logies on April 15, after The Voice.

Viewer counselling should be made mandatory for those wanting to go cold turkey and avoid what can only be described as a crapshoot. — Glenn Dyer

Department of Corrections. The following correction appeared on The Sydney Morning Herald’s website over the weekend (though has now disappeared) and was published in today’s Guide:

The article “Based on an untrue story” in The Guide on March 26 alleged that Eddie McGuire didn’t say “bone” in a discussion with Mark Llewellyn.

The Herald acknowledges that, in proceedings brought against him by Channel Nine, Mr Llewellyn swore an affidavit in the NSW Supreme Court about the comments made by Mr McGuire and that his affidavit was not contested.

The Herald apologises to Mr Llewellyn for any suggestion that he lied in his affidavit.

Of course Crikey leaked the full “boned” affidavit back in 2006 — head here if you want to reminisce. 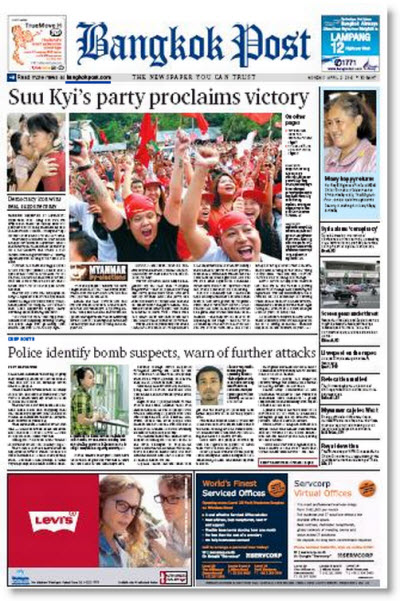 “The ruling, slipped out relatively unnoticed at the end of last week, dismisses the argument made by a group of bloggers that their unremunerated contributions had provided a substantial part of the value of the Huffington Post and that they should therefore be entitled to some of the spoils of the site’s sale to AOL for $315m. The bloggers demanded a third of the sale price, $105m, in compensation. John Koeltl, who presides over a US district court in New York, rejected the argument outright.” – The Guardian

“The Canadian Broadcasting Corporation’s annual funding from the federal government will be cut by $115-million over the next three years, a blow that could lead to job losses or programming cuts at Canada’s public broadcaster.” — National Post

Google gets into the tablet business

“Google Inc., undaunted by a short-lived attempt to market and sell smartphones on its own, is now trying the approach with tablet computers in a quest to capture market share from Apple Inc.’s iPad. The Internet search company will sell co-branded tablets directly to consumers through an online store like rivals Apple and Amazon.com Inc., according to people familiar with the matter.” — Wall Street Journal

Obama and Romney give advice to the papers

“News Limited has today launched its integrated sales operation in what it claims is now Australia’s biggest single media sales team. The launch of News Australia Sales is backed with a “Power of People” marketing campaign promoting the company’s audience reach.” — Mumbrella

“The King of Twitter is now the King of Apple, as Two and a Half Men star Ashton Kutcher is attached to play Steve Jobs in the indie pic “Jobs,” which Joshua Michael Stern (“Swing Vote”) will direct from a script by Matt Whiteley.” — Variety