The week-old chicken ‘sent back to supermarket shelves’

Workers inside the nation’s chicken factories say supermarket giants Coles and Aldi are reselling fraudulently labelled week-old chicken and that unsold tray packs are re-purposed for kebab meat or marinade.

Disturbing testimony provided by processing plant employees also details how dirty birds are regularly picked off the ground and packed in boxes for general consumption.

The allegations are contained in a poultry industry discussion paper released last week by the National Union of Workers. Last year, the NUW was involved in a bitter industrial spat with Baiada Poultry over the use of non-union labour and cash-in-hand contractors.

Much of the country’s chicken meat ends up in Australian mouths via the Coles-Woolworths 70% supermarket duopoly, which purchases 60% of chicken meat sold. Sixty-three per cent of the poultry market is in turn controlled by near duopoly Baiada and Ingham, which each make billion dollar profits. Consumption of chicken has doubled in the past 25 years to 44 kilograms per person and is marketed as a “healthy” alternative to red meat. 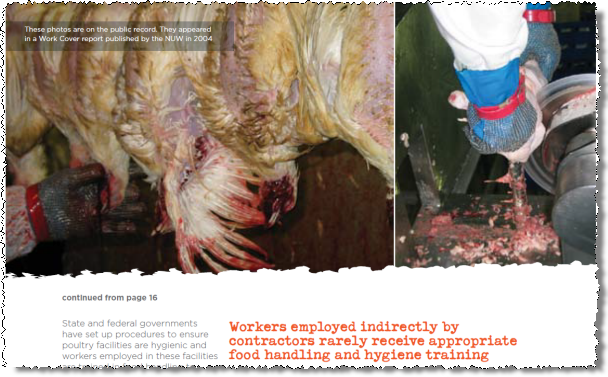 But until now, specific accounts of the grisly production process among the industry’s 14,000 workers have been thin on the ground. Production-line staff — some paid just $9 an hour or a “piece rate” of 44 cents per deboned bird — requested anonymity for fear of reprisals.

“The date changes on labels so they are using up to six-day-old chicken, which is then dated today’s date. Returned chickens are processed as new chicken: when Coles returns chicken it is sent to Aldi and Aldi returns it, it is sent to Coles,” Erica claims in a statement.

“This happens every week. Returned tray packs are turned into kebab or marinade and sent back out. I would never buy chicken from Coles or Aldi because of what I have seen.”

Alekso reveals that “in the chiller there are chickens lying on the dirty wet floor and on plastic bags. They will all be packed and sent to Coles.”

Changuna claims “… it was very common for workers to pick up a chicken that had fallen on the floor or which lots of people have walked on. The chicken on the floor would be packed for sale. This usually happened between once and a few times a day. Somebody could be killed from eating that chicken.”

One former poultry worker, Surlyong Downes, recalls that “a lot of the chicken looks like it is infected by some sort of contamination. Chickens get dropped on the floor and people put them back on the line.”

Downes says a supervisor once directed her to remove labels on some inferior poultry that had been returned to the company. It was then re-labelled and sent back to another supermarket.

“I felt bad about it but there was a lot of pressure on us and we were worried we would lose our jobs if we didn’t do it,” he said.

Other interviews with contractors Harpreet Singh and Sokhom Koey detail payments well under the legal minimum wage and an almost total absence of leave and legislated conditions.

It also calls for a ban on sham contractors — some of which have to provide their own knives — and demands changes to the Migration Act to shore up the precarious employment situation of international students and temporary workers employed in the industry.

In its introduction, David Whyte, a sociology expert from the University of Liverpool, details a race to the bottom in wages and conditions that has led to quality and safety declines fuelled by the deep discounting of Coles and Woolworths.

As the cost of other types of meat have risen, chicken production costs have virtually halved since 1987, Whyte says. Labour costs make up a comparatively large 19.5% of processors’ operating costs and are an obvious target for knife-wielding accountants.

Speculation is now rampant that the supermarket throat cutting seen during the milk and beer wars will soon extend to chicken. The result, Whyte says, while superficially benefiting the consumer, “will cause fatalities on both sides”.

The industry is infamous for its employment practices around undocumented migrant labour, sham contracting and safety issues. In 2010, one Baiada subcontractor, Sarel Singh, was decapitated after his jacket got snagged in a machine set-up to process 183 birds per minute.

Baiada is responsible for meat sold under the supermarket brands Lilydale and Steggles inside Coles and Woolworths. It also supplies fast-food behemoths KFC, Nandos, Red Rooster, and McDonald’s.

The Baiada family are fixtures on the BRW Rich List with estimated wealth of $372 million following the acquisition of Bartter-Steggles in 2009. Crikey revealed last year that Liberal industrial relations warriors were eyeing the Baiada-NUW dispute as a stalking horse to re-energise a Peter Reith-style push for workplace deregulation. Baiada has argued in court that it is not responsible for actions of its arm’s-length contractors. Interestingly, the NUW report holds up rival Ingham as example of a model workplace.

On the Coles website, celebrity chef Curtis Stone reassures customers about the hormone-free status of Coles chickens. But anecdotes from the factory floor suggest the risk to consumers will come not from hormones, but from bacteria caused by rushed production and a lack of training.

Poultry accounts for 30% of the about 250,000 food-borne campylobacteriosis cases recorded each year. Listeria, a significant threat to pregnant women, can also be present on poultry. Contractors say they have failed to receive Hazard Analysis Critical Control Point (HACCP) to control food-borne diseases, with employers washing their hands of the requirement.

A Coles spokesman, Jim Cooper, said there was “no evidence” that the incidents alleged in the report were occurring. Last year, Crikey reported on an independent Coles probe into Baiada under its internal Ethical Sourcing Policy — Cooper said the results of that probe were “commercial-in-confidence” and that he was unable to respond. Aldi’s nominated PR officer did not return calls.

The Australian Chicken Meat Federation was also contacted for comment but we did not receive a response before deadline — we will update this story when we receive it.

This is what happens when unions are not allowed to organise properly in the workplace. One of the things unions do is monitor OH and S standards in workplaces and in doing so also monitor the safety of the product to the public. Thank you John Howard, Peter Reith, andTony Abbott for the deregulation of the industrial system. Yes Labor has contributed too, but these guys made the main contribution to de unionising workplaces, especially through Workchoices. I will never buy chicken from Coles or Aldi again.

Will we have safe to consume chicken tonight? Edward James

Having done a stint in one of these factories I was sickened enough never to touch factory farmed chicken – or factory farmed anything for that matter.
Soulless, exploitative and brutal.
Chooks and people are all just grist for the mill.

That has cured me of buying pre- marinated chicken; have never touched chicken mince since a fellow student did holiday work at steggles and told me what got thrown in to the mince mix.