Want to be the new Australian Carrie? Fairfax’s long-serving relationship columnist Samantha “Australia’s Carrie Bradshaw” Brett — who once claimed a push-up bra was worth more than a PhD to women — has published her final column. Mumbrella reports Brett is off to give TV news a try. But it was a comment on the Mumbrella article that most caught our eye: a job application for Brett’s job …

My name is Shannon Ford (though I am willing to change it to “Shassy” or “Shancois”). I’m a hip, fun-loving writer in my late-20s who embodies all smart Sydney girls looking for love (and s-x) in The City. All of my friends say I’m “sassy” and that I always give them the best advice on their relationships. This is true. My philosophy is that from our souls to our stillettos, girls are fabulous and deserve to be with a man who treats them like the princess they are.

I consider myself an expert on love and relationships, having dated hundreds of men who are either hot or rich (often both!). I am still searching for my own “Mr Big” and I know your readers will soon be totally addicted to hearing all the goss on my adventures! My writing style is quite literary and thoughful (like Carrie Bradshaw’s). I relate all of my personal experiences to the big questions of life and love in the city by ending each musing with a big question that really makes you think. Such questions I have posed (over cocktails with the girls — easily-convertable into paid article format) include: “What’s more important … a big heart or a big penis?”, “When should you tell your fiancee you’re not really blonde?” and “How many carats are you worth to him?”. Whilst I could answer all these rhetorical questions (ie: “p-nis”, “never”, “five”), I think it’s more important to encourage women (especially young girls) to think for themselves so I like to leave the big questions open to discussion so besties have something really interesting to talk about during coffee/shopping/cocktails. My writing also appeals to men because it gives them insight into how special women are and how all we want from them is a fantastic life full of beauty, wisdom, art, fashion, travel, dancing and love. It’s why smart women like me (and the readers of SMH) live in this exciting city that is Sydney. The greatest city in the world (after Paris, New York and London, of course).

I look forward to hearing back from you. I’m currently on a salary of about $85,000 at the boutique public relations firm I work at so naturally I expect my writing salary to match that or be above. Given the Kardashians make $200,000 per nightclub appearance, I think you are getting a bargain because I’m every bit as inspiring to “real” women as they are. I would also like some flexibility to focus on the acting/TV presenting/modelling/book publishing/shoe designing/music performance opportunities which I expect to have in the near future.

UK papers pour petrol on Tories’ burning popularity. Yesterday it was pasties, today it’s petrol, as the UK conservative government struggles to combat the weight of media-driven public anger against it lurching from one spot fire to another. Yesterday, Crikey reported on the “pasty row” that had engulfed UK politics for all of 48 hours — that is, until petrol shortages became the primary concern for Britain’s public.

The “petrol crisis” began on March 28 when Cabinet Office minister Francis Maude — after a threatened strike by fuel tanker drivers — offered advice to the public that: “a bit of fuel in a jerry can in the garage is a sensible precaution.” Then all hell broke loose. Maude is having a bad week: it was he who had to face The House of Commons to address the “cash for access” scandal and then found himself at the centre of the petrol shortage hysteria. Maude has since retracted the comments and apologised but the damage was done.

Here’s a collection of today’s UK newspapers. As you can see, it doesn’t make great viewing from the UK government’s perspective … 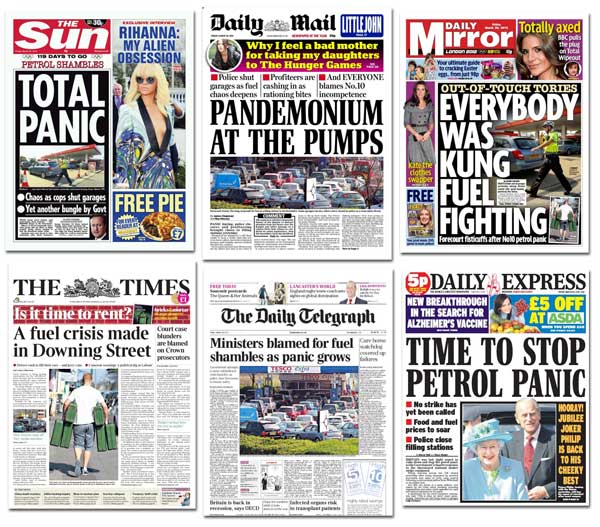 Despite the queues, the service stations running out of petrol and a few fuel-based fights fuelling even greater furore, they may be a snippet of good news for David Cameron: according to The Independent, “the petrol panic buying triggered by ministers’ advice will bring an extra £32m to the Treasury’s coffers from fuel excise duty”. They may just be charging their jerry cans in celebration at Whitehall yet. — Leigh Josey

Front page of the day. Today’s New York Daily News front page is unquestionably confronting as it concerns itself with a former New York City policeman’s high-profile r-pe case being ruled a mis-trial. The Atlantic Wire today analyses the complex relationship between the media, the public, jurors and the law and how they don’t always work in achieving justice:

“… people reading the news tended to feel one way, while those sitting on juries, or in courtrooms and police stations, disagreed that the evidence was there to convict of r-pe. Of course, there’s plenty going on behind the scenes that the average person is not privy to, but tabloid front pages have never been a place for nuanced details.” 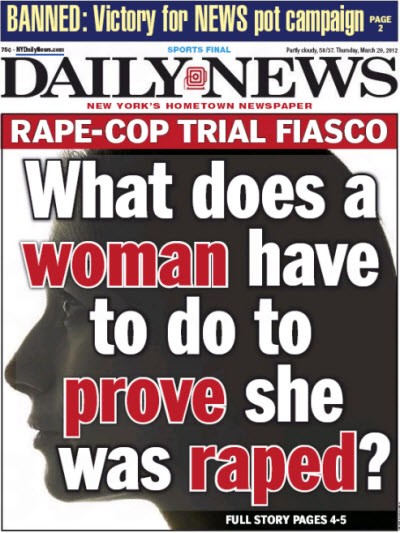 “News Datacom Systems (NDS) has demanded a retraction from The Australian Financial Review (AFR) as the threat of legal action swirls around the newspaper and the BBC’s current affairs program Panorama.” — The Australian

Hacking investigations could cost up to £40m

“The cost of the Metropolitan police investigations into phone hacking and other alleged illegal activity by journalists is set to rise to £40m and tie up 200 police officers – about seven times the number investigating p-edophiles in London, the Leveson inquiry has heard.” — The Guardian

“There’s one intriguing scoop in the ongoing saga of the Soccer Mom Madam, Anna Gristina, that you’re not likely to read about in the New York Post.” — New York Observer

“The NSW thoroughbred racing industry is set to reap a $100 million bonanza following a ruling handed down this morning by the High Court.” — The Sydney Morning Herald

Anyone else wonder at the coverage the Tories are getting in Blighty?
Murdoch’s Limited News : for revenge at Leveson being allowed to continue – and not be closed down (like a mate would).
The UnLimited News : because of the backing and “symbiotic osmotic affects” exchange between Murdoch and his pal D.C. [(which probably stands for something else now?)] – when they were “Your place or mine” friends?

Fleet St. has been kicking off on this stuff forever.

Thanks for confirming that sub-species of PR female in Sydney with values and ideals as deep as the layer of paint on a concrete summer patio.

If you get the job you will fit right in with Sydney’s religious dedication to the price of real estate, ubiquitous new car tv advertising, and barely concealed alcoholism.

Good luck with the cosmetic work in future years.

You’re totally welcome. We PR ladies are a special and unique breed…a ‘sub-species’ as you say. It’s very rare for a profession to consist entirely of women who are both sexy AND smart. Some might say it’s the product of being born to a wealthy, intelligent, private-equity fund CEO and his beautiful, blonde wife. Others might say that it’s the rejuvenating effects of the Balmoral sea-breeze and the organic canteen food at Queenwood. Either way, Sydney men are lucky to look at us, and Sydney women are lucky to look up to us.

I assure you that I am as excited about writing my new column as you obviously are about reading it. You too can be an ‘IT boy’ by being one of the first to read it at http://shassyandthecity.tumblr.com/

P.S. I don’t need luck for ‘cosmetic work in future years’. When I tell my readers to ‘get em done’, they’ll do it.