It's The Sun's way to the shop if you want a sausage roll ... Rundle: Sheehan wrong on Toulouse killer ... Front page of the Day ... No show for SMH’s magazine for "technical issues" ... Murdoch’s News Ltd. rejects TV piracy claim in Australia ...

Rundle: Sheehan wrong on Toulouse killer. “Progressives views on the Toulouse killer have set new lows in rationalising bigotry” screamed the standfirst on Paul Sheehan’s column in The Sydney Morning Herald. Writing on the three sets of killings in the city by Mohammed Merah, whom, the column alleged, had been turned into a victim, Sheehan advances as evidence one New York Times story (which he did not quote or cite in a checkable way) speculating that anti-immigrant sentiment may have been at the root of the killings … and that’s it.

Oh, there was also an argument that Merah was a victim of French social exclusion by Tariq Ramadan. Ramadan, a professor at Oxford, is what one might call a semi-Islamist, arguing that Western Islam should develop its own distinctive identity, congruent with liberal societies. But for Ramadan that would include a strong disapproval of full gender equality, pre-marital s-x, a strong line against no-fault divorce, homos-xuality, gender mixing (ie: at public swimming pools), contraception, etc.

He’s also a strong proponent of religious schools over the secular state ones. In other words, he’s a down-the-line social-religious conservative, with far more in common with George Pell — or Paul Sheehan for that matter — than with the dreaded (and uncited) progressives. Writers don’t do their own standfirsts, but the sub pretty accurately captured the blatantly wrong tenor of Sheehan’s article. Sloppy work from Sheehan, inadvertently or otherwise — Guy Rundle

Front page of the day. This could go down as a New York Post classic … 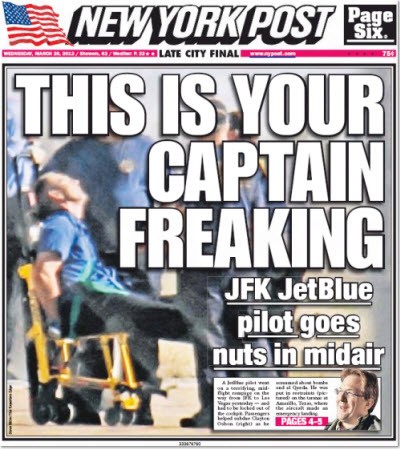 No show for SMH mag for ‘technical issues’

“The Sydney Morning Herald‘s monthly glossy insert, the (sydney) magazine, has not been inserted by the newspaper today despite heavy promotion in the newspaper for the past several days.” — mUmBRELLA

“The News Corporation faced new accusations of hacking on Wednesday after media reports in Britain and Australia claimed that an affiliate of the media conglomerate had hacked into pay-television rivals to undermine their operations.” — The New York Times

“Two freelance British journalists were shot and killed by Syrian security forces Monday in a town near the Turkish border in Idlib province, according to the Committee to Protect Journalists.” — Los Angeles Times

“The Daily Mail spent an estimated £143,000 asking a private eye to make 1728 potentially illegal requests to unearth phone numbers and addresses of public figures over a three-year period, including personal details of the Duchess of Cambridge and her sister Pippa Middleton.” — The Guardian

The New Republic‘s paywall comes down