Despite Campbell Newman barnstorming the Queensland electorate, it was the PM taking top honours in our rankings this week.

Despite Campbell Newman barnstorming the Queensland electorate, it was the PM taking top honours in our rankings this week. Speaking from a nuclear summit in South Korea, Gillard played the “it was time” card in explaining the catastrophic fallout at the polls last weekend, but regardless of the 14 long years Labor held power in Queensland, ramifications for federal ALP have fallen squarely under the spotlight.

It’s true that with very few exceptions Australian voters do not like to have the same two powers governing their state and their country, and Bligh’s dismissal leaves SA as the only mainland state with a Labor government. But is the bloodletting enough to save federal Labor, or merely the beginning of the end?

It was almost a relief to see the nothing-if-not-consistent Barnaby Joyce setting his sights on the Deputy PM position in the lower house while joining the chorus of conservatives tying the Queensland loss to the carbon tax. 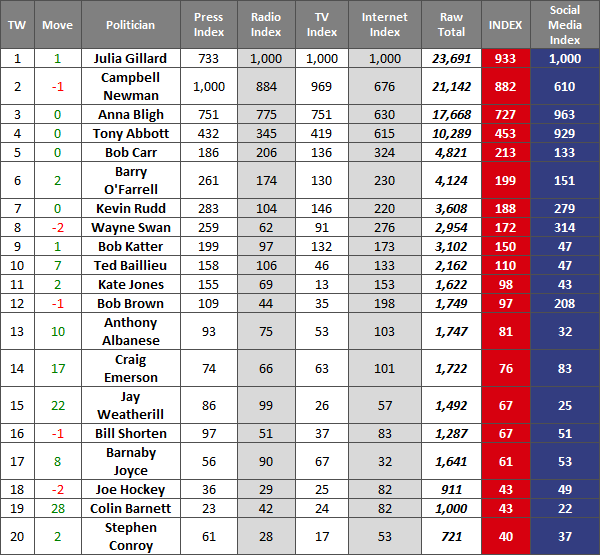 Tweet of the week: “Anna Bligh’s campaign bus is for sale. It’s 20 years old and has no seats.”

Whether he’s a conspiracy theorist or has Interpol on speed dial is anyone’s guess. But if anyone knows the mystery of JFK’s death, our money’s on Clive.

Campbell Newman down 1 slot already? That’s the shortest honeymoon ever.