Raising an eyebrow — and a glass — to ANZAC Day celebrations

So the Australian Defence Force is concerned about "the increasingly excessive use of alcohol during Anzac Day commemorations nowadays".

Give the general a call. So the Australian Defence Force is concerned about “the increasingly excessive use of alcohol during Anzac Day commemorations nowadays”. That’s what reports of a Department of Veterans Affairs study of public opinion  are telling us anyway. 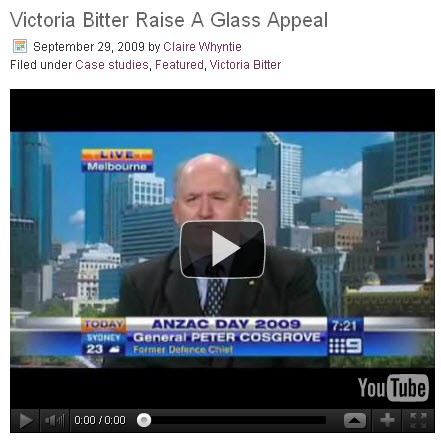 The Victoria Bitter “Raise a glass” campaign, despite the token efforts of the Ogilvy Public Relations team that devised it, hardly encourages a decrease in “the use of alcohol during Anzac Day commemorations.”

That ethical guardian Rupert tweets. One thing Rupert Murdoch has never had to do is pay money to get access to the world’s political leaders. Which gives a certain poignancy to his tweets on the current British controversy over the fund raising efforts of the Conservative Party.

Glenn pointed to the considerable influence Apple had in the strong performance of the US S&P 500 share price index (a 6.8% rise this quarter that would have been only 2.8% without it) and now CNN Money points out how Apple’s outsized impact on the tech sector in isolation is even more striking: 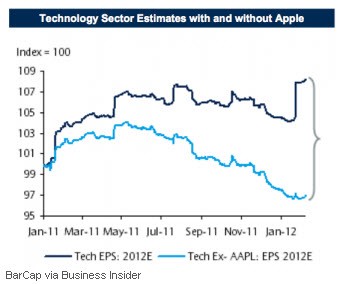 Good enough for Britain’s Office of Budget Responsibility. All you doubters about the worth of the Crikey Indicators take note: Professor Steve Nickell, one of the independent experts brought in by UK Chancellor George Osborne to make sure Britain’s economic estimates are robust, is a believer in these market based indicators.

The professor gave his endorsement during evidence to the House of Commons Treasury Committee yesterday after being asked whether he thought the Euro was likely to fall. The department itself did not “attach probabilities”, said Prof Nickell.

“I go and look at [leading bookmaker] William Hill and they actually have the odds of these sorts of things. Last time I looked, the odds of Greece not using the euro by the end of the year were of the order of 40 per cent.”

At Crikey, where we look at market prices as a whole and not just one bookie in drawing up our Indicators, we think that 40% is a bit high. The Crikey Euro Usage Indicator of whether any country currently using the Euro will announce their intention to drop it by midnight ET on 31 Dec 2012 is 23.2%.

And as for events closer to home: 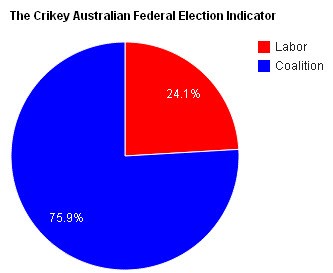 Indeed (at least one undercover story among all the others, actually
serving the “public interest”, not just the usual salacious gossip for circulation purposes) –
“What was Cameron thinking …. when he let this enquiry keep going?
Did he think we wouldn’t bite back? With my gadgets?”?

[No, he didn’t pay money as such – more “payment in kind”?
That’s the beauty of that sort of “free market” barter system –
where money is no object.]

Drinking on Anzac Day?!?!? Maybe they should see a production of The One Day of the Year. I’m certain it’s far less that it used to be.

Surely, in the words of Tony Abbot, the ANZACs have made their point, and should just move on?

Agreed Bob the B. I’m sure I recall Anzac day morning being one of the few days, along with good Friday and Xmas, that the pubs weren’t legally allowed to trade.

But after the march, there was always a surfeit of blood, beer and tears, to go with the odd game of two up.
Anything, to distract the media gaze from those sad distant eyes.