Will management now pull Kyle into line? The onus is now on the management and board of Southern Cross Austero and the Seven Network as to the future of Sydney radio personality Kyle Sandilands after the Australian Communications and Media Authority found 2Day FM breached decency standards in comments last November about a female journalist. Southern Cross Austero, which owns 2Day, promised to do so after a 2010 breach and failed to do so. Seven has a more difficult task because Sandilands is being promoted as a judge in variety program Australia’s Got Talent — the 2012 season of that program starts after the Easter ratings break.

Australia’s Got Talent has a high proportion of female contestants. Seven has to ask itself if it wants those contestants to be judged by a man who has been found to have made “deeply derogatory and offensive” remarks about a female. Seven itself has been successful in reaching female viewers with programs like Revenge, Packed to The Rafters, Home and Away and Winners and Losers. Does the employment of Sandilands on the network send the right message to those hard-won viewers?

Advertisers deserted his breakfast after the latest controversy. The cost to Southern Cross Media Group was reported at $10 million. Sandilands and Jackie O saw their share fall 1.1 points in the first radio ratings in February. It fell another 0.4 points in survey two, out this morning — a drop from 11.2 in the final survey of 2011 to 9.7% in the latest results. They are now running third in the breakfast slot behind 2GB’s Alan Jones (14.2) and Adam Spencer on ABC 702 (10.4). But they remain dominant in the commercial breakfast stations broadcasting to younger listeners, ahead of Nova, 2MMM, Mix, WSFM and 95.3. — Glenn Dyer

Front page of the day. The NT News was back to its … well … best, with this classic NT News front page today. 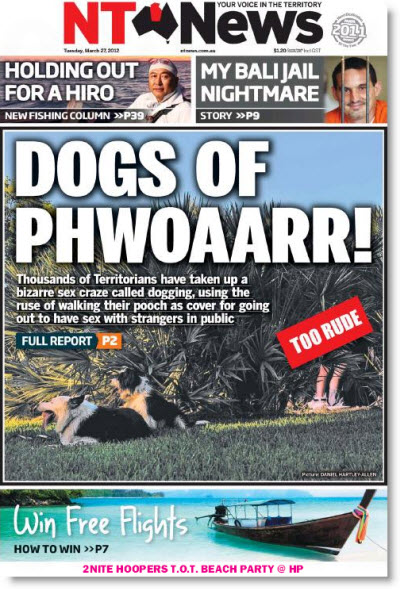 Leveson inquiry: Met police may have to log all press meetings

“New guidelines for the Metropolitan police could require all officers to make a record of all unofficial meetings with journalists, despite warnings that such a log could have a chilling effect on the press.” — The Guardian

“The high court has ordered £90,000 in damages to be paid to former New Zealand cricketer Chris Cairns, who took libel action against the former chairman of the Indian Premier League (IPL) over allegations of match fixing made in a tweet in 2010 and related comment made to a cricket website.” — journalism.co.uk

“The Nine Network has announced its intention to broadcast a standalone 3D channel for the duration of the London 2012 Olympic Games.” — Media Spy

Journo allowed back to Russia after four-year ban

“An investigative reporter barred from entering Russia after publishing an article about government corruption four years ago has been allowed to enter the country again.” — The Moscow Times

“From ‘Ronald Reagan: Our First Black President’ to ‘GLEE: Songs, S-x & Sleaze’, Buzzfeed trawls through Conservative Teen so you don’t have to.” — Buzzfeed