When did Channel Nine know about ‘Choppergate’ news boss’ top PR job in new Queensland government? Lee Anderson, the former director of news and station manager at Channel Nine in Brisbane has lined-up the plumb role of head of Campbell Newman’s government media unit. Anderson left Nine News following revelations of that faked coverage of murdered Sunshine Coast boy Daniel Morecombe. Despite his fall from grace, Anderson was invited back by his former employer to head-up Nine’s election coverage on Saturday night. Editorial conflict of interest? Surely Anderson would have been in discussions with LNP party minders for weeks before last Saturday’s poll. Wonder if he disclosed that to Nine news bosses. It certainly wasn’t disclosed to Nine’s viewers …

Election day dodgy dealings A few observations from Saturday’s Queensland election day massacre have trickled in, disappointingly though, no sausage sizzle reviews … One voter says they spotted “so-called independent but really liberal candidate for Niddrie Jim Little, clearly seen at 7.45 at Clarendon St primary school A V Heights, removing one ALP sign to put his up and covering another with his.” Well at least he’s getting his hands dirty. Meanwhile, another junk mail report from an Ashgrove voter: “whoever funded the ‘Straddie Mothers’ campaign (the emotive letter featured in your tips section on Friday) certainly has deep pockets. We have received at least eight copies of the same letter in our mailbox over the past two weeks.”

Opera sightings: Barry, Simon … and Rob. NSW Premier Barry O’Farrell exchanged pleasantries with federal Arts Minister Simon Crean before taking their premium seats at Saturday’s inaugural opera on the harbour spectacular in Sydney. But Crikey spies report vanquished minister Robert McClelland, seated a good distance away to the side of the stage, kept to himself in the bleachers and the lavish functions during interval and post-show. Given the sides Crean and McClelland very publicly picked in Labor’s leadership contest, that was probably for the best.

Observations overheard at the Quills on Friday night (should that be, given the excessive intake of some members of the Fourth Estate on the night, the Swills?):  “Does anyone else here reckon that The Age’s Mark Baker would be a monty to play Jim Hacker if ever they reprise Yes Minister?” On Neil Mitchell’s speech after winning the Gold Quill. “His bloody speech went on longer than his program. Pity there was no volume control available.” On the night’s host Helen Kapalos … “Has everyone at Channel Ten been forced to go to the Sandra Sully school of voice timbre and pronunciation?”

Please take one (or two, or three …) It’s been a while between free newspaper sightings, here’s one from a Fremantle cinema over the weekend, a whole pile of West Australians just begging to be unwrapped … 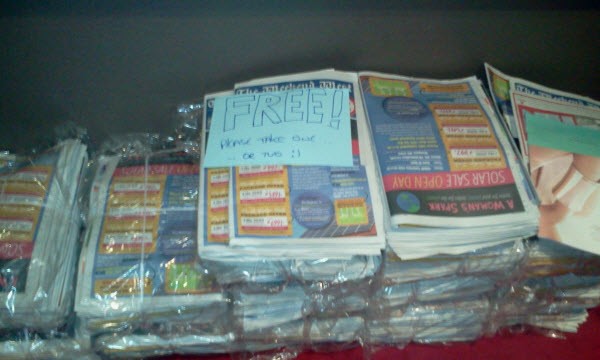 So many News Limited papers are thrown out onto our footpaths around Australia. They are litter which is the result of a commercial activity being conducted on our public property without approval from the local council. Apart from a perception the advertising is not reaching those readers advertisers paid to receive it, there is a reasonable perception newspapers like these are being washed into stormwater drains where they flow as polution into the sea. Edward James