Oz media claim police killed a man twice. Over the past two weeks there have been two separate incidents involving NSW Police that have resulted in the deaths of two civilians. One was the death of a 21-year-old Brazilian student last week, the other was a shooting at a Westfield shopping centre on the weekend.

According to multiple news outlets today, the incidents are not mutually exclusive but in fact the death of the same man, twice, killed by police. At least that is how it reads and sounds….

And Sydney radio station 2SM’s 6.30am news bulletin today: “Police have killed a man for the second time in a week…” (listen to the audio here)

Latest on the Clover Moore vs The Daily Telegraph battle. On Saturday The Tele ran an article titled “Clover’s cops tell Julia to move on” about parking restrictions in Sydney’s CBD forcing the prime minister’s Sydney office to be moved, a decision which it says may cost taxpayers $21 million.

Except Moore’s office claim that they weren’t approached by The Tele pre-publication and if they had, they would have explained that those regulations mentioned were not brought in recently but done on advice from the Australian Federal Police after September 11. Her office says they asked for a letter to be published the following day clarifying matters, but it was not.

An updated story published in today’s Tele notes Moore’s office’s claims, adding: “Ms Moore was unable to provide evidence that the police told the council to get rid of the car parks at the time The Daily Telegraph went to print last night — nearly two days after making the claim.”

Moore’s office says that’s because it was the weekend and someone has to look through 10 years worth of archives. The AFP refused to comment to The Tele on the matter (not uncommon when it comes to terrorism matters).

We’ve written before about the war of words between The Daily Tele and Sydney Lord Mayor Clover Moore. No doubt this won’t be the last battle. — Amber Jamieson

The Age‘s The Sting love fest. Kudos to Age investigative machine Nick McKenzie for winning four separate Quill Awards on Friday (in conjunction with Richard Baker and others) as detailed elsewhere in today’s edition. Far less glorious has been The Age‘s relentless plugging of McKenzie’s new Melbourne University Press book The Sting at every opportunity.

It’s one thing for the paper to run extracts from the impressive drug tome, but something else to include ads for the book at the end of every hard news yarn inspired by its research. MUP is a totally separate corporate entity to Fairfax, so why the wall-to-wall love fest? — Andrew Crook 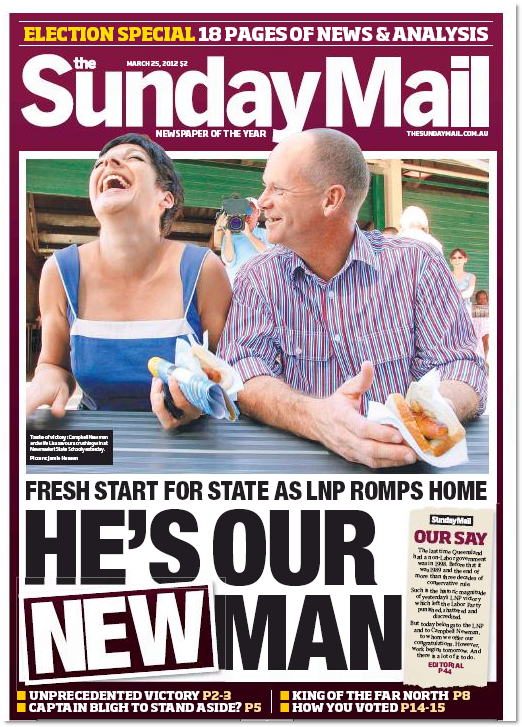 The Department of Corrections. Today’s correction in The Oz changes the context of the story a little…

Meanwhile in Canada, The Toronto Star made a meal of popular TV show Mad Men...

“Fairfax Media has unveiled a major relaunch of its Sydney Sunday tabloid the Sun-Herald, broadly reversing the changes instituted in the newspaper’s 2010 redesign.” — mUmBRELLA

More movies will be streamed than watched on disc in 2012

“Pop the champagne and up the bandwidth, because 2012 is the year we finally do away with discs. According to a Bloomberg report on IHS Screen Digest, more viewers will stream movies than watch them on disc.” — Tech Crunch

Kate and Gerry McCann urge PM to save ‘no win, no fee’ for libel cases

“Kate and Gerry McCann, the couple whose daughter Madeleine went missing in Portugal, have written to the prime minister urging him to abandon his government’s plans to alter no-win, no-fee legal agreements.” — The Guardian

“How does a story about teenager’s illogical killing go from barely registering a mention in local newspapers to a national conversation?” — Poynter

“Sometimes a picture tells a thousand words, as in this selection of winners from the 2011 Military Photographer of the Year competition, which was recently judged at the Defense Information School at Ft. George G. Meade, Maryland. ” — Foreign Policy

You’d probably need a National Broadband Network to stream more movies than watch them on disc. The Liberal Party wants Australia to remain in the 20th Century.