Crikey media wrap: "Can-do" Campbell Newman "can did" on the weekend, leading the Liberal-National Party to a crushing victory of Queensland Labor and winning a likely 78 seats in a 89-seat parliament.

“Can-do” Campbell Newman “can did” on the weekend, leading the Liberal-National Party to a crushing victory of Queensland Labor and winning a likely 78 seats in a 89-seat parliament.

“It is much more than a loss, it is without doubt a devastating defeat,” conceded Labor leader Anna Bligh, as she announced her resignation as Labor leader and from her seat. Even Newman admitted he was surprised by the scope of the win, telling journalists after the win that “it’s surreal”.

“This is without doubt Labor’s greatest electoral catastrophe,” writes Laura Tingle in The Australian Financial Review.

The Courier-Mail’s Dennis Atkins declared: “History’s been written, records broken and set, and a new force has arrived in Queensland politics.”

“Suddenly Kristina Keneally’s performance doesn’t look so bad. What happened to Labor in Queensland on Saturday is without any precedent in Australian history — certainly not since the Second World War, prior to which the party system tended to be more fluid. Labor can be assured of only six seats, holds the lead in only seven, and on the best case scenario will win only eight, for a total of 9% of the Legislative Assembly’s 89 seats. That compares with the “cricket team” of 11 members that Queensland Labor famously managed to return in 1974, at what was previously the gold standard for Australian election massacres — and at that time the parliament only had 82 seats.”

Many commentators went with the 1974 “cricket team” sporting analogy.

“That infamous Labor cricket team of the 1970s has now been whittled down to a water polo squad of seven, possibly minus a goalkeeper if Tim Mulherin is unable to secure the seat of Mackay,” writes Michael Madigan at The Courier-Mail.

“The LNP, at only the second state outing for the merged Liberal and Nationals parties, will pull off one of the most comprehensive electoral victories in Australian history, reducing Labor to somewhere between a netball team of seven and a 15-member rugby side,” said Dennis Atkins.

There will probably only be two seats outside Brisbane that belong to Labor.

Queensland is the latest state to turn conservative after years of a Labor government. It makes implementing federal policy even more difficult, notes The AFR‘s editorial:

“For her part, Prime Minister Julia Gillard will have to be more consultative in negotiations with the states to tackle issues such as housing, population growth and infrastructure development and she will no longer be able to push federally dictated reform outcomes onto the states as political authority has now moved so convincingly away from Canberra.”

Tingle also notes the comparison between Bligh selling off state assets and Julia Gillard’s “lie” over a carbon tax: “The caucus just has to look at the way Queenslanders dealt with a leader, and particularly a woman leader, who they believed broke a promise or misled them —  in Bligh’s case on privatisation — to get a deathly chill in their bones.”

In The Australian, Peter van Onselen speaks of similar concerns:

“The parallels are obvious and, unless something dramatically changes when the Prime Minister goes to the polls, they appear likely to add up to a federal replay of what we just saw in Queensland. Voters don’t like being deceived.”

Will Rudd return? asks Geoff Kitney in The AFR:

“Some senior figures said they believed the Queensland result would revive the hopes of Rudd supporters that his leadership ambitions may not be dead. This is like the electric shock that reivves a body that was thought to be dead,’ one said. ‘Kevin is not as dead as everyone thought.'”

But according to exit polls, ultimately this was about state issues and the dirt campaign that Queensland Labor ran, says Dennis Atkins in The Courier-Mail:

“So, let’s deal with what happened. Labor hit the pedal too hard on its “Trash Newman” campaign.

The Textor Crosby material says the top issue that most affected voters was “political behaviour”. This is an unheard-of outcome.

They then delivered the most comprehensively political campaign in the history of campaigns. The campaign that came before wasn’t just negative. It was brutally negative – pushing nasty arguments against Labor’s opponents and their families, including the leader’s spouse.

It struck a new low. Labor refused to the death to apologise, legitimising what had been said.

Labor threw everything at it — desperately hoping some mud would stick. It backfired.”

On Sunday Bligh resigned as leader of the party and from her seat as South Brisbane (which had only narrowly maintained), declaring that she was “closing the book” on her political life.

“I apologise today to the people of South Brisbane for any inconvenience and difficulty that my decision will cause them,” she said.

“The size of the loss, the loudness and clarity of the message sent by the people of Queensland is unmistakable and, in fairness to Queenslanders, I don’t believe I should ignore it. I simply don’t believe that Labor can develop an effective Opposition, or rebuild from this point and from this defeat, if it has me as part of its public face and in its ranks.”

But who will be leader now? Many of the most likely leaders-in-waiting — Andrew Fraser, Cameron Dick, Kate Jones — lost their seats. It’s now suggested that Fraser or Dick may be parachuted into Bligh’s South Brisbane seat — although Labor minister Annastacia Palaszczuk is the current favourite to take over as leader.

Jones lost, but she fought a campaign that may influence how future Labor campaigns are run, writes Troy Bramston in The Australian:

“Outgoing MP Kate Jones ran a gutsy and spirited campaign. Intelligent, personable and a talented media performer, she was behind only Campbell Newman and Anna Bligh in the scrutiny placed on her. Party insiders were so impressed with Jones that a run in the seat of Brisbane at the next federal election is tipped.

Newman’s failure to match or exceed the LNP vote statewide was not only because of a campaign to smear him personally, but also because of a new model of community campaigning and grassroots organising.”

The front page of The Sunday-Mail yesterday focused on the new Premier: 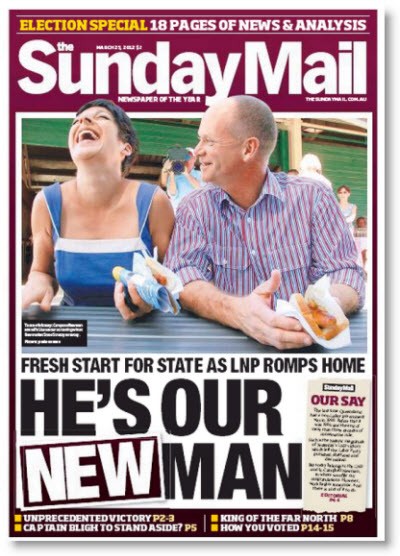 Over at The Power Index, Paul Barry offers up nine things to know about Newman, including his chutzpah, his political pedigree and his potential problems.

But Newman needs to thank former leader Lawrence Springborg for combing the Liberals and the National Party into one combined party in Queensland, notes Steven Wardill in The Courier-Mail:

“What Springborg knew after the election loss two years earlier was that the parties would never win in their current predicament.

There was no way they could again present a Nationals leader as the alternative premier during an election knowing that to win, it would mean the Liberal leader would likely assume the position.”

One of those problems will be how Newman responds to the flood commission report handed down a week ago, notes Robert MacDonald in The Courier-Mail:

“And now Newman has to live with an unfunded election promise that could potentially involve many millions of dollars. How much, for instance, might it cost to fully implement the commission’s recommendation the state government consider demanding that all electricity supply conduits below the defined flood level be waterproofed?

But it’s not just the money. It is also the sheer bureaucratic complexity of many recommendations, such as the suggestion that all levees in the state should be regulated, but only after state and local authorities actually agree on the definition of a levee.”

I disagree with Albo’s lame ‘it’s time’ take, which seems to have been borrowed from the lamented demise of Whitlam’s better half.

I think this is partly about Labor having little product differentiation, being egregiously like the Liberals, and breaking its promises just as egregiously.

The good thing Bligh allowed before the axe fell was a better appraisal of Wivenhoe. As she seems more personable than Gillard, her fate cannot bode well for the latter.

The new government in QLD should pass a law ASAP that any candidate who resigns for the reason Bligh made should be forced to pay the cost of a byelection. This woman has no morals.

The conventional wisdom seems to be the wipeout is due to “its time” or the fact that Bligh was female. In the previous election blokes elected Bligh, and if the government was competent–which it wasn’t–it wouldn’t have been wiped. The cost of living was a big issue. Power, water and public transport shot into the ionosphere and everytime a bill arrived it reminded one to vote against Labor.

To decimate is to reduce by one tenth. It comes from the Roman practice of drawing lots and executing one soldier in ten. This is clear from the name “deci/mate”.

Labor were more than decimated.

@ Capot. I think it would be better for taxpayers if the second pklace candiate took the seat. Failing that easy fix which could be legislated for all elections in future. Then yes the person breaking faith with their trusting constituents the way Anna Bligh has, should pay the full cost of a by election!
@ Stephen The Wivenhoe issue was presided over by a dysfunctional Labor government just like Heiner asnd Shreddergate. While so many Labor team players have been put in the street where they belong in NSW and Queensland, the damage they have accomadated is yet to be exposed for all to consider by a Royal Commission. It is time for Can do newman to represent the peoples. Edward James