A senior aide to shock jock Kyle Sandilands has erased from the web a personal hate site that featured images of domestic violence and petrol-sniffing Aborigines.

A senior aide to shock jock Kyle Sandilands has erased a personal site from the web featuring images of domestic violence and petrol-sniffing Aborigines, just days ahead of an ACMA ruling expected to slam Sandilands for sexism.

Bruno Bouchet, a self-described “arrogant Frenchman” who toils as Kyle and Jackie O’s “guest and talent producer”, flicked the off switch on the website — brunolovesboobs.com — as Crikey called to ask whether he thought the content was appropriate.

Bouchet recently edited his bio on the blog to remove a reference to his job as an “award winning producer with the Kyle & Jackie O show”.

But before its dumping, Crikey screen-grabbed some of Bouchet’s more disturbing posts for posterity (others are preserved on Google’s cache).

On March 7, the Austereo employee posted a video with the description “woman punched in front of her kids by husband is caught on camera”. It records a disturbing domestic assault witnessed by the couple’s children.

Another entry featured a man dressed up as a bloody sanitary pad, which Bouchet regarded as the “greatest costume of all time”. 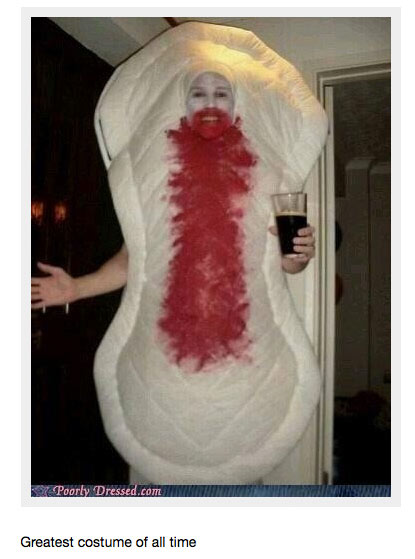 On March 19, Bouchet endorsed a sign affixed to a women’s toilet that explained that the toilet was closed “because a woman used the sink as a toilet and broke it off the wall”. 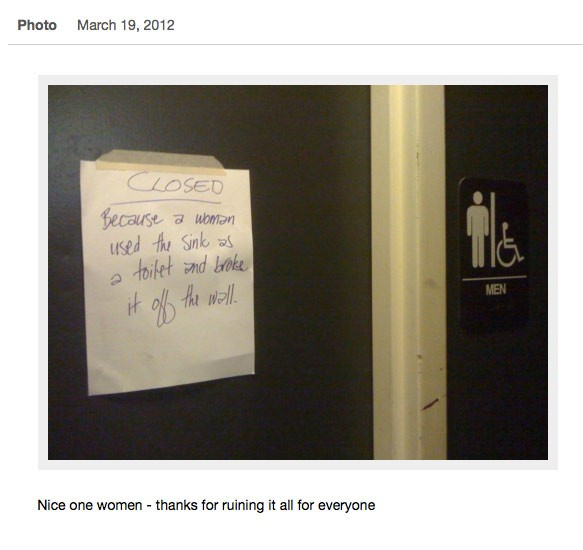 Another post highlighted a racist anti-Obama sticker slapped on a car featuring the charming phrase “Don’t re-nig in 2012”. 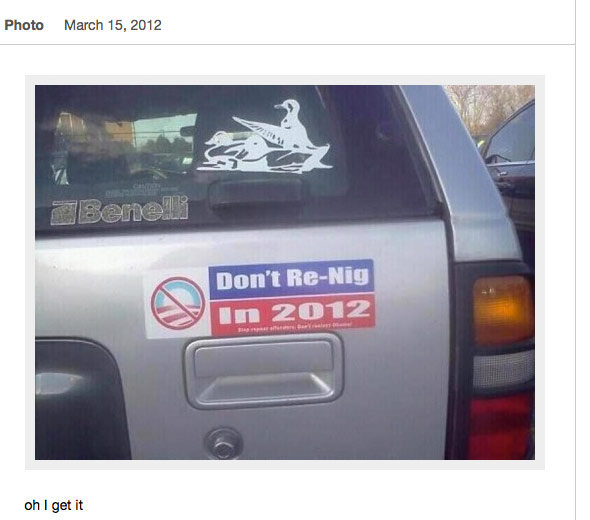 On Saturday, in his last post before brunolovesboobs.com was taken down, Bouchet attached an image of a playing card mocking an indigenous petrol sniffer.

Bouchet, a 26-year-old ex-Madonna King producer and A Current Affair researcher, has undertaken a number of stunts for the Kyle and Jackie O show, most of which involve him removing his clothes and parading around the studio.

He is described on the 2DayFM website as “everything that’s wrong with society – French, arrogant and sometimes forgets to shower!”

This isn’t the first time Bouchet has courted controversy. Last year, he went on air to state that he would never donate his own organs, which led to calls for his sacking on Facebook. In 2004, he went on SBS Insight and backed the invasion of Iraq and during that year’s federal election campaign accused Labor leader Mark Latham of stealing one of his policy ideas.

ACMA has been investigating a complaint relating to the notorious spray, in which Sandilands labelled Stephenson a “fat slag” with “small t-tties” who was “full of shit” after she posted a lukewarm review of his disastrous LA-filmed TV foray.

The Commercial Radio Code of Practice and Guidelines contain a clause specifically banning “material which condones or incites violence against women”.

Possible penalties under the Act include directing Southern Cross Austereo to issue an enforceable undertaking or attach an additional license condition if a breach of the Code of Practice is found.

Advertisers left the station in droves after the sickening rant, with Southern Cross Austereo losing about $10 million in revenue. Rumours persisted that Sandilands would be fired but that has yet to come to pass.

In 2010, ACMA imposed a license condition on Austereo relating to the protection of children after Sandilands and O grilled a 14-year-old girl about her s-xual history while she was strapped to a lie detector.

Yesterday in Fairfax’s Sunday Life, Jackie O launched a pre-emptive strike against the looming ACMA ruling, claiming that she failed to speak up during Sandilands’ foul attack because she didn’t want to give the impression of “saving my own a-se”. In the interview she stated that she “never considered” herself a feminist.

Sandilands has made much of his “LA” lifestyle, with the 2Day website featuring lavish pics of his “Mediterranean mansion”. However, a powerful Australian media executive enmeshed in the Hollywood scene told Crikey this morning Sandilands was a total non-entity.

“I wouldn’t even call him a distraction. I don’t think he resonates in the industry here. Kyle Sandilands is not a name that is known in the business…in terms of showbiz the only time I’ve heard his name is once at a party from an E-list reality star,” he said.

A spokeswoman for 2DayFM, Vicki Heath, left a message on Crikey‘s voicemail saying she would provide a “one line statement”. But in a follow up-call, she declined to comment, saying only the Bouchet website was a “touchy issue” and there were “a couple of things she needed to work through”.

On deadline, she issued the following statement: “Southern Cross Austereo has a social media policy and our expectations from our employees are made very clear.”

Bouchet did not return calls.

The Kyle and Jackie O Code of Contrition

There is a God Dept: Sandilands dumped from Idol

This is the guy who is on record as saying that “if anyone asked to describe the Kyle and Jackie O Show, then I’m forever going to tell them that story because that’s the best way to describe it… it’s animals having sex played out to a dude in his eighties, who is friends with the Queen”.

A few days ago, he tweeted that he was going to back to his house to spend time with his right hand. Soon thereafter, it appears that someone at 2DayFM has ordered him to delete his account.

Good to see some attention being given to those who engineer the vile stunts that Kyle and Jackie O engage in.

Citizens of a world where being a grade A @rsehole is viewed as some kind of karmic blessing.

That – or they’re just a bunch of low life parasites who contribute nothing remotely useful to the world.

I wasn’t going to comment on these bores but I am so pleased someone else has revealed what I’ve known forever: sandilands is complete non-entity in the USA and trash sheets like Sydney Confidential should take time off from re-writing press releases and stop promoting these dills.

You will find the ‘lavish’ house in LA is a shared rental with 6 other people.

I’m sorry, but that truly is the greatest costume of all time.

Re: John64. Yeah — that’s supposed to be offensive? Is the author offended by menstruation in general, or is he just listing how many breaches of tabloid etiquette this non-entity has committed?

2DayFM is vile, but we knew that. These are just juvenile narcissists looking for attention. Buying into the moral outrage gives them the oxygen they crave; far better to forget they exist.