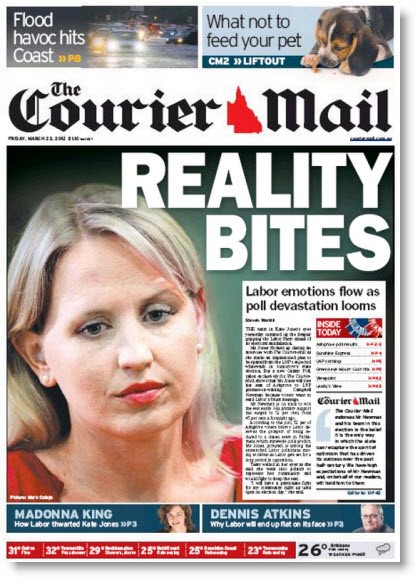 Ashgrove, the seat that Newman is battling incumbent Labor MP Kate Jones for, has been the most contentious of the campaign. But a new poll from Galaxy shows a boost for Newman, writes William Bowe at Crikey‘s Poll Bludger:

“Just as Galaxy arrived a week ago to support ReachTEL’s contention that Kate Jones had hit the lead in Ashgrove, so it has emerged on the eve of polling day to confirm that Campbell Newman has surged ahead. Whereas last week’s Galaxy poll had the two locked together on 45% of the primary vote, the latest survey of 800 voters conducted on Tuesday and Wednesday evening gives Newman a resounding lead of 52% to 38%, with Jones’s 51.5-48.5 two-candidate lead transformed into a 55-45 lead for Newman.”

That poll represents the whole government, argues Dennis Atkins in The Courier-Mail:

“It’s the death notice of a 13-year-old government, being chased out of town by an angry mob otherwise known as voters.

It might just be a poll on one seat in Brisbane but this seat happens to be this election.”

Not that Anna Bligh is sitting at home waiting for defeat. Jared Owens in The Australian wrote a list of all Bligh’s ridiculous activities from the hustings yesterday (in order):

Journalists from the campaign trail have been tweeting various amusing photos and snippets from the leaders’ shenanigans. Bridie Jabour from the Brisbane Times offered up this pic of Bligh, adding “I would laugh but we [are] all dressed like this”: 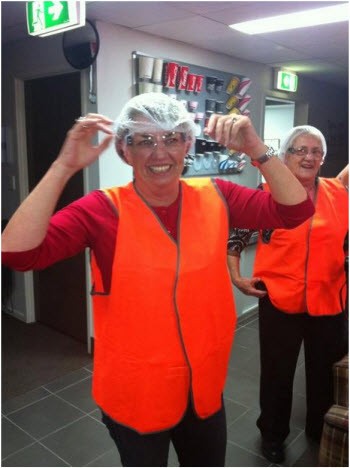 It seems the LNP are serious about cost cutting, with Koren Helbig from The Courier-Mail tweeting that with no chairs offered to journalists at an LNP costings announcement, they were instead sitting on the floor: 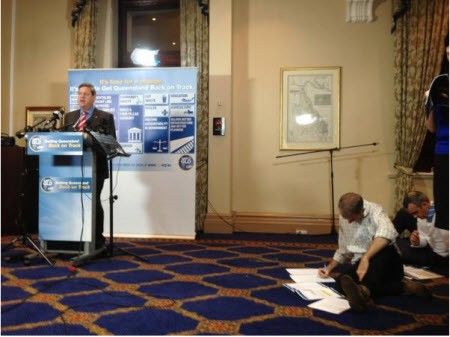 But the journos are getting tired. As Jabour tweeted last night:

Labor’s most loved Bob Hawke was wheeled out yesterday to help Bligh and her team in the final straight and Hawke was in classic form, says The Age‘s Tony Wright:

“Hawke at 82 proved he still had the touch. Labor supporters, given less than 24 hours notice, trooped in to the Gaythorne RSL in the Brisbane suburb of Mitchellton, keen not just to hear him speak, but to line up to be photographed with him.

And Old Silver wasn’t about to disappoint.

”But I’ve got to say, in all objectivity you’ve got to ask yourself a question …”

The question, of course, was about Campbell Newman’s qualities as man and as an Australian. And in Bob

Hawke’s estimation, he failed dismally on both counts.”

Where would Labor be without Bodgie? asks Andrew Fraser in The Australian:

“When Labor is in trouble anywhere in Australia, it sends for Bob Hawke.”

Bob Katter’s Australia Party has been engaging in dirty tricks, argues the LNP. As Adam Davies reports in Toowoomba’s Chronicle:

“Over the past two days, leaflets have started appearing in letterboxes across the electorate looking like campaign material from the LNP.

The leaflets have also been distributed at Toowoomba’s nursing homes and aged care facilities.

The leaflets carry the same colours and design used by the LNP in all their election material and intimates that a vote for Campbell Newman would be a vote for gay marriage.

They imply that the Liberal National Party’s leader Campbell Newman is a supporter of gay marriage.”

The mastermind behind the campaign is none other than former high profile National Party member Luke Shaw who is now campaign director for Bob Katter’s Australian Party.”

Not all Queenslanders will be casting their votes tomorrow, reports Tony Moore in Brisbane Times.

“More than one in 10 adult Queenslanders are not on the electoral roll to vote in tomorrow’s state election.

Although 2.75 million Queenslanders were expected to cast their votes this weekend, the Australian Electoral Commission estimated about 417,500 Queenslanders — 13.19% — were not on the roll.”

The Napoleonic Newman is soon to face his Waterloo, writes Terry Sweetman at The Courier-Mail:

“Napoleon’s first barrier was when he discovered there were only 46,000 combat-ready men left in his army.

Newman’s first hurdle will be in the first week when he receives a briefing from Treasury on the state’s accounts.”

Anna Bligh could execute a moon landing and it still wouldn’t alter the swing by a fraction of 1%.

But the shine will tarnish on the LNP in record time.

Those who want to stop the way we are misgoverned will vote LNP and put Labor and any Labor supporters last on a below the line vote, Labor needs to be broken apart not just out of government. These same voters will be ready to vote for change again, the next time they vote. And they will keep voting below the line and directing their own preferrences until they start getting politicians who are ready to give us all honest open government. Well I can still dream. Edward James

We are all doomed! The LNP are already making promises they cant keep (e.g. putting a lid on electricity prices will either hit the dividends or the CSO to Ergon). Maybe Campbell has a money tree? Is there really that much waste in the system and these guys who havent really governed QLD for 20 years are going to find it and fix it? WAKE UP NEWMAN YOU ARE DREAMING

As an Ashgrove voter I’m glad its coming to an end. Jones and the ALP waged a clever campaign but I think the turning point was when a leaflet attacking Newman’s wife was sent around. Throwing dirt at Newman seemed to be having an effect but many saw sledging his spouse as too much. Jones faded in the polls after that. She’s now trying water power–sobbing in interviews–but it won’t work.

The ALP is headed for oblivion simply because it was an arrogant under preforming government. It shows again that governments lose elections, oppositions don’t win them.The contradictions in the Pineapple Party–LNP–will all too soon become apparent with coal gas. The Liberal wing loves it the National cockies hate it.

bloody hell – isn’t anything sacred anymore – i like the eagles – now bligh has even wrecked that too!