In Montana, Texas and Mississippi they love Republican flag-waver Fox News. In Hawaii, Idaho, North Dakota and Iowa it's liberal-leaning MSNBC. Plus other media news of the day in today's media briefs.

Ramadge won’t comment on Crikey. As the week draws to end it’s time to update Crikey readers on the fate of former Age film critic Jim Schembri. On Wednesday, fearless ABC broadcaster Jon Faine decided to grill Age editor Paul Ramadge on the “interesting little tiff” which saw Schembri “resign” from his prized gig after 28 years at the paper.

“Jim was a long standing employee at The Age,  he had a distinctive and treasured voice in many ways over many years. But, after discussions Jim has decided…he resigned…and he’s moving into different areas,” Ramadge explained. Faine pressed: “C’mon tell us what really happened.” Ramadge: “Well that’s what happened” Faine: “It’s been widely re-reported, don’t you want to acknowledge the background to this?”

Ramadge  explained he didn’t want to talk to “public” about personal matters. The tenacious Faine wasn’t taking no for an answer: “Was he pressured to resign after a dispute … he was upset over something written about him on a blog and purported as I understand it … I’m relying on Crikey here which is not always something that should be done … he was threatening people with some litigation and claimed to have the support of his bosses, you in particular in making those threats …”

Ramadge protested that because the story originated in “Crikey, which sometimes can be rumour and innuendo”, he couldn’t possibly comment. Ramadge then said he had given Schembri a farewell, which is strange given that, as Crikey reported last week, Schembri had officially declined that offer, according to an internal email sent by Ramadge. — Andrew Crook

Media map: what America is reading. In Montana, Texas and Mississippi they love Republican flag-waver Fox News. In Hawaii, Idaho, North Dakota and Iowa it’s liberal-leaning MSNBC. And The New York Times‘ influence seems confirmed only to the north-east corner of the United States …

Forbes and Bitly have released an interactive map of the most influential media in the US, measuring the most widely-read news sources and stories by state. As Forbes‘ Jon Bruner writes:

“Bitly’s research reveals some obvious interest in local issues — a Forbes story about Wisconsin’s pensions was widely read in Wisconsin and an Onion article about President Obama was popular in Washington, D.C. — and it confirms some dearly-held stereotypes about media consumption: NPR is popular in Oregon and Minnesota; Fox News is popular in Mississippi.

“But the same data points to a sharp division between fully national news publishers that are widely read across the country, like The New York Times, and the largest regional papers — some of which, like The Washington Post, have national aspirations that they’ve had trouble realizing. The latter remain sharply contained to their traditional markets.”

Can we have an Australian map please?

Does it matter the Apple story was faked? Last year monologist Mike Daisey performed a season on his one-man show “The Agony and the Ecstasy of Steve Jobs” at the Sydney Opera House in which he detailed his first-hand experiences of speaking with Foxconn employees who had suffered due to horrific labour conditions there. By all accounts it was a harrowing and powerful show as Daisey recounted his meetings with workers who had been poisoned, had limbs crushed in machinery and told the story of others who had dropped dead on the production line. He also pointed out that a lot of the workers were actually children, some as young as 13.

The problem is, it now appears that the most harrowing parts of his story were all fabricated. Was this theatre or journalism? Does it matter if Daisey embellished his story to make a larger point? And what responsibility do media outlets have to check the authenticity of the stories told by whistleblowers?

Daisey’s story unravelled after reporter Rob Schmitz raised concerns about the authenticity of his claims after radio program This American Life did a feature on Daisey. The show subsequently retracted the story and did an entire program pointing out the errors in their original interview with Daisey. Of course, This American Life isn’t the only news outlet to have covered Daisey’s stage show, when he toured Australia his claims were reported uncritically in our own press, and there are no doubt a lot of journalists and editors at news outlets throughout the US who are understandably angry at being taken for a ride.

Daisey now claims that his work isn’t journalism, though his show was advertised as being non-fiction. Does it matter if he fabricated or embellished stories? — Dave Gaukroger of Pure Poison (read the full post here) 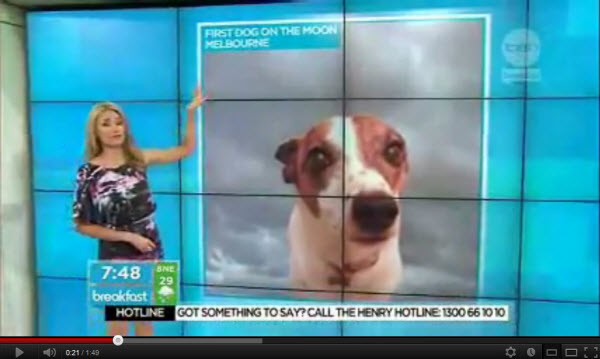 Front page of the day. In NFL news, Denver Broncos quarterback Tim Tebow was yesterday traded to the New York Jets. For those who don’t know who Tebow is, he has become quite the cult hero in the USA for his religious fervour and now-famous kneel-and-prayer touchdown celebration. Tebow now finds himself at the Jets and the Big Apple tabloids are having a field day: 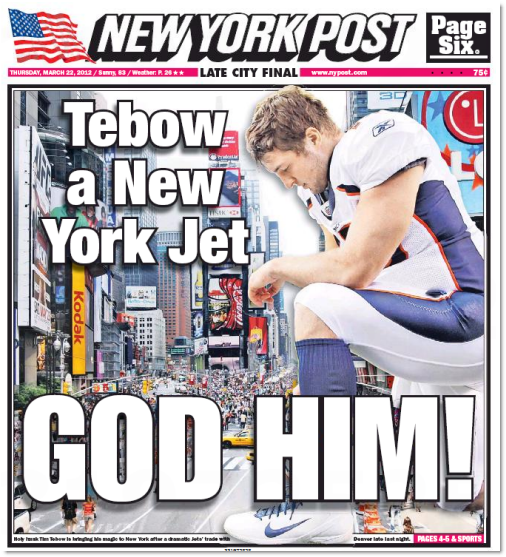 “Subscriptions television bosses have slammed a proposal to give Communications Minister Stephen Conroy the power to decide which football matches should be aired on satellite or free-to-air networks, with one calling the idea “embarrassing.” — The Australian

“Another dummy cover of the redesigned Sun-Herald has emerged, confirming that Fairfax Media’s Sunday tabloid is planing to ditch news on the front page for a magazine style, image-led approach.” — Mumbrella

“Irish publisher Independent News & Media has reported a pre-tax loss of €63.6m (£53m) for 2011, after being hit by tough economic conditions and events such as the earthquakes in Christchurch, New Zealand.” — The Guardian

“In 1966-7 my Dad got a job as a young reporter for the Daily Mail’s Manchester office, just as it was made Newspaper of the Year. All staff received the memo below from editor Mike Randall.” — Dysonology

“Political campaigns might be using sophisticated digital advertising techniques to attract potential voters to their Web sites, but data released by Nielsen on Wednesday shows that it is President Obama who still holds the lion’s share of Web site visits.” — The New York Times

“Journalism and ethics” – oh for the good old days when they cared about appearances and at least looking like they took their role of keeping the public fully and frankly informed seriously – rather than today’s norm of thinking their prejudice, opinion and interpretation of events matters more than the story and using their position of influence to control dissemination of “news”, to play politics?

Any readers who make it this far and haven’t clicked on the link to the breakfast show weather, do it now, it’s worth the effort.

Thanks Chazzai, loved the weather girl explaining that it wasn’t actually the animals sending those tweets.

Is anyone else disappointed that Jim Schembri’s adventures aren’t part of some post-new media experiment in irony regarding a film critic who doesn’t like criticism?