The indignity of the hustings

As the interminably long Queensland election campaign grinds to a close, spare a thought for Premier Bligh.

As the interminably long Queensland election campaign grinds to a close, spare a thought for Premier Anna Bligh. Reduced to messaging along the lines of “yes we know you’re going to vote us out, but please be gentle” — take a look at her itinerary from yesterday, presented by Jared Owens in The Australian, and in order:

And not a sausage in sight to at least ease the pain. Out on the hustings, in a desperate bid for each and every vote, there is no dignity.

Editor’s note: Those eagle-eyed among you who read the ads in our esteemed tome may have noticed a job ad for none other than the editor of Crikey. That’s because I’m off on maternity leave as of mid-May. Consider this a community service announcement for those who are keen to apply — given that Mick the sub has already got the jump on you. Political operative Ian Hanke (@IanHanke) has already started the campaign to parachute our sub editor Michael Vaughan into the slot with the hashtag #makemicktheman.

Mick the sub maintains that he neither endorses nor wants any part in Hanke’s naked bid for power. But photoshop extraordinaire Leigh Josey has taken the liberty of imagining Crikey under the reign of everyone’s favourite singleted subbie: 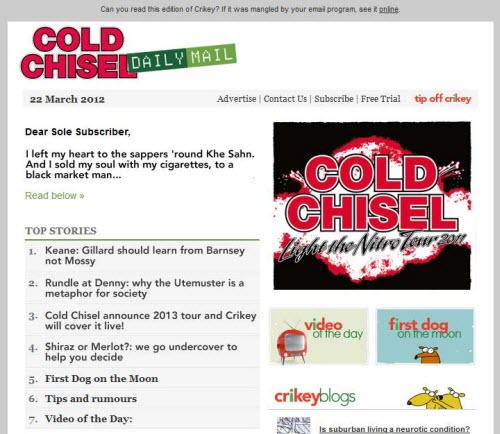 Crikey owes me a new iPad. I was drinking a cup of coffee when I read the article on ‘Cold Chisel Daily Mail’…

I for one, am really p*ssed off that we won’t have Sophie “Gaia” Black to watch over us any more after May. (sob)
As for Shiraz or Merlot? The answer’s in the mail.

Oh, I’m pretty sure I can imagine it.

Do subscribers get any vote on the finalists?

Anna Bligh could execute a moon landing and it still wouldn’t alter the swing by a fraction of 1%.

I am sorry Wayne but I am not liable 🙂