To say anything other than we can’t win would have left Anna Bligh looking quite ridiculous.

A last desperate appeal for the underdog effect. There was no other credible option I suppose. To say anything other than we can’t win would have left Anna Bligh looking quite ridiculous. Hence her closing message this morning:

“I think in this business it’s important to call a spade a spade and I’m not here to sugar-coat what the polls are telling us.

“There’s no doubt that if they were replicated on Saturday that we would not only see a change in government, but a very emphatic change in government that could in fact see Campbell Newman with a higher percentage of seats that any premier has ever held in Queensland.”

Will such a naked appeal for a sympathy vote have any success at all? Well the entrants in our Crikey election contest think it might. While the opinion polls suggest Labor being reduced to as few as a dozen seats in the 89 seat parliament, our readers are predicting 26 seats for Labor, 56 for the Liberal National Party and seven for independents and minor parties.

The Crikey contest predictions for every individual seat are now posted on The Stump blogsite.

Trying to understand the unpopularity. Even only being reduced to less than a third of MPs in the parliament, let alone anything like that predicted 12, would be a devastating result for Labor. So devastating that an “it’s time” factor would be insufficient to explain it. So what else is involved in Queensland Labor’s unpopularity?

The nearest I can get to an explanation is that the decline in the Labor’s fortunes began quite soon after Anna Bligh won her victory and proceeded to abandon the long standing party policy opposed to privatisation so presumably that is involved. But Labor governments, state and federal, have sold off assets before so, on its own, privatisation seems insufficient to have provoked such strong negative feelings towards the Premier herself.

To me it points towards punishment over the way things were done — a belief that Premier Bligh had not been truthful in what she said before the election. And if I am right in that conclusion then there will be a federal implication in this weekend’s results — an implication that Prime Minister Julia Gillard should be worried about.

And now for the final entries. Entries to our Crikey Queensland election contests close at midnight on Friday. Along with bragging rights to the winners go annual subscriptions to the Crikey newsletter. For your chance to be a winner, click the links below.

Petrol prices still creeping higher. This graph is not good news for the Labor Government. 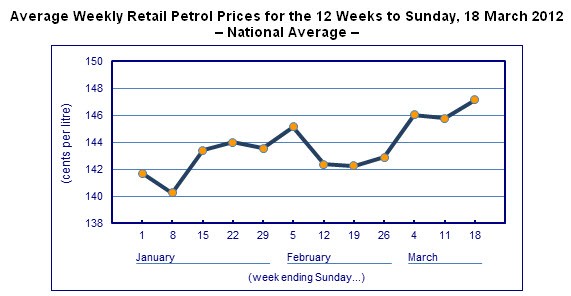 Maybe this explains Clive Palmer’s behaviour. Have they done it again?

“A 50-year mystery over the ‘cursed bread’ of Pont-Saint-Esprit, which left residents suffering hallucinations, has been solved after a writer discovered the US had spiked the bread with LSD as part of an experiment.”

– A report from this morning’s London Daily Telegraph

Id put Qld Labor’s trouble down 10% to longevity and 90% down to privatisation. Privatisation always has to be driven through by the elites (the real ones, not the pretend inner city latte set standard whipping boy/girl ones) against the will of the population. It nearly always ends up in a train wreck (sometimes literally) and shocking public policy outcome while the 1% laugh on their way to the bank (oh yeah that got privatised too!). Its beside the point that its been done before and gotten away with, people are always furious about it, and clearly for good reason. But its also cumulative, people are totally over it and react more furiously as time goes on depending on context. It was a shocking policy lead by Labor, that’s why they are being abandoned by people across the spectrum including the ‘sainted mainstream’ as one of your correspondents put it. Its the one issue that unites the broad mass of people who can tell bullsh*t from plain as day reality. Privatisation is usually always a disaster and we hate it. Labor may be proud of doing it, but its just poleaxed them for years in Qld.

The only reason I might agree with Gainsbourg is that the Queensland electorate are an ignorant lot. Like children they want all the lolly they can eat to make them sick but expect not to have to pay or to suffer any consequences.

Richard Farmer is obviously a southerner. The real reason–rather than privatisation as a proximal effect not an ultimate cause–is that most Queensland governments do nothing much at all. This was certainly true of the extended Bjelke-Peterson era. (Some twits seem to think that resource extraction would not have happened under any government whichever colour: they should look at the current mega-expansion happening under Labor.) But any development of cities, especially Brisbane was over Joh’s utter indifference if not active hostility. It is why Brisbane is 10 to 20 years behind in the development cycle compared to almost anywhere else.

It was also broadly true under Beattie, an unashamed populist who resisted any radical action even though by then the growth of the state was crying out for it. Anna Bligh’s sin was simply trying to actively govern, to actively manage the problems of untrammeled growth with inadequate funding despite the runaway resource industry. Guy Pearse has written (in these pages I believe, and certainly in his piece in the Monthly–Quarry Vision) that there is a misconception that Qld reaps huge rewards from the giant coal mining industry but in 2009 it got about $1B which was 3% of tax revenue. Campbell Newman’s vaunted “four pillar economy” is identical to Queensland’s existing and always economic basis. (Mining, Ag. Tourism, construction). Doh!

Any actual active government in Australia immediately raises an outcry–lead by the Murdoch press plus all the vested conservative interests. We can have 12 years of a largely do-nothing Howard government but a few years of very active Rudd-Gillard government and the vested interests would have the populace believe the sky is falling. The Goss government in Qld was similar–a huge backlog of modernization needed after 21 years of Joh and the NP. They lasted one term!
As usual we get the government we deserve. I predict the next few years will be some of the worst ever (because it counts even more now).

Kind of agree with Mike, but still think privatisation, infuriates people, not coz they are ignorant, but because they know its essentially about a temporary lift of pressure of the budget which comes back to hurt public interest down the track with shocking service outcomes and usually poor financials. Witness various privatised entities in Victoria under Jeff. Shite performance, shite cost benefit outcomes etc. All the rest Mike says is true, but privatisation rubs salt into the wounds..

Look at the mandate they’ve given Newman.
I hope they don’t start whinging when he starts wielding
it like a scythe – after they handed it to him.