Linking the super change with the minerals resource rent tax as the legislation wound its way through the parliament was too clever by half.

The super con. For months now the Labor Government has been linking increased superannuation with its mining taxation changes as if the ordinary workers were going to get a benefit from the slugging of the miners.

Now that the mining legislation is through the parliament the truth is beginning to be told. That rise in contributions from 9% to 12% will have to come, Workplace Relations Minister Bill Shorten now openly concedes, from workers deferring part of their annual pay rises for the next seven years.

Linking the super change with the minerals resource rent tax as the legislation wound its way through the parliament was too clever by half. It will end up costing Labor votes rather than winning them.

Messages from the final advertisements. In the overall scheme of political things advertisements in newspapers are largely irrelevant. In my experience the only people who really read them are candidates and members of the election campaign teams. But at least the pair below from this morning’s Courier Mail present an interesting contrast.

Notice first the relative sizes. The Liberal National Party’s version of an “it’s time” message is a full page. Money is no real problem for the LNP’s campaign. Winners attract money into the coffers like magnets gather iron filings.Labor, on the other hand, has little good money to throw after bad and has settled on half a page for its final message. 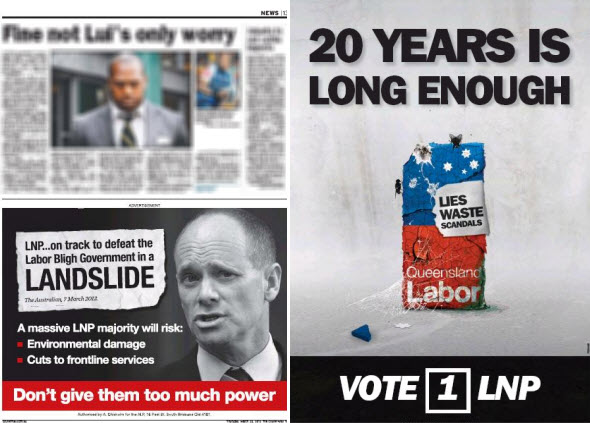 And what an unusual message it is. Playing the underdog is one thing while admitting that a crushing defeat is imminent and appealing for a sympathy vote to limit its size is another thing altogether.

“Don’t give them too much power” is surely the most desperate ploy ever seen in an Australian election campaign.

And now for the final entries. Entries to our Crikey Queensland election contests close at midnight on Friday. Along with bragging rights to the winners go annual subscriptions to the Crikey newsletter. For your chance to be a winner, click the links below.

Some real political wit. From The Guardian comes this delightful little anecdote about Britain’s Labour Leader Ed Miliband responding to the cutting by the Conservative Government of the maximum income tax rate from 50 to 45%.

After asking members of the cabinet to raise their hands if they would personally benefit from the top-rate tax cut (they declined to oblige), he dropped a sly reference to the popular TV show Downton Abbey.

The more things change. It’s nice to know I have at least one reader. Brian Fletcher from Margaret River sent me a copy of this issue of Popular Science from back in September 1929 apropos yesterday’s snippet about Tennessee and the teaching of evolution: 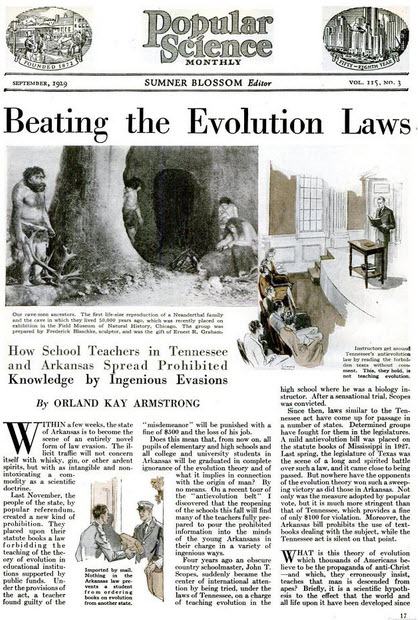 Back then they had banned teaching evolution after a referendum. Today they have progressed to doing it by votes in the legislature.

The Crikey Republican Indicator, based on what the markets say will be the final outcome, now translates that into Romney having a 92.5% chance of becoming the candidate with Santorum at 1.7%, Gingrich 0.7% and Ron Paul 1.5% with everybody else making up the balance.

When it comes to the presidency itself the Crikey Indicator shows:

PARTY OF THE WINNING PRESIDENT

“dont give them too much power” is almost exactly the same as WA Labor’s unsuccessful “Don’t give the Liberals a blank cheque” campaign against Richard Court in the late nineties.

Phen
Thanks for that. Your memory is better than mine.