Qld election one for numbers nerds

There are only two days left until the Queensland election and given Premier Bligh's latest run of ads have taken claiming underdog status to new heights.

Pay attention, numbers nerds — there are only two days left until the Queensland election and given Premier Bligh’s latest run of ads have taken claiming underdog status to new heights, predicting the result could prove to be a cakewalk. 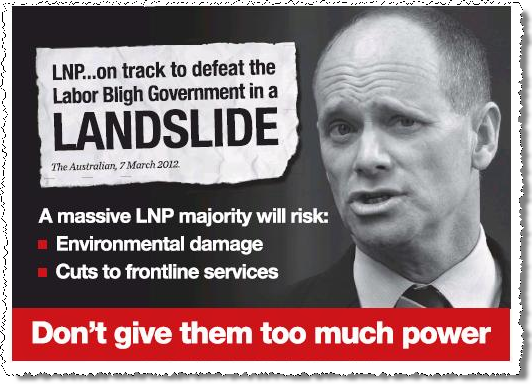 Sue Lappeman ‏ @sueGCB: And @TheQldPremier said she would trial an abolition of 3am lockout. Which is also not going to happen. Why are we here again?

Sue Lappeman ‏ @sueGCB: Broadbeach will become a drink safe precinct if Labor wins. Which isn’t going to happen. So stand down everybody. @TheQldPremier

Given this thing is such a done deal, it may be in your best interests test your political skills by entering Richard Farmer’s election contests.

As our guru pointed out in yesterday’s edition, “The late entries in our Crikey Queensland election contest are beginning to look much more like the polls. This week the verdicts on Ashgrove are favouring a Campbell Newman victory while the early-bird selections went strongly towards the ALP. And as for the overall election winner, it’s hard to find a Crikey reader who thinks Anna Blight will still be Premier on Sunday morning.”

So it’s not a matter of if, but by just how much.

Read the fine print below, and get graphing.

For the really keen among you there is the long test — predict the result in every one of the 89 seats. And the less keen can try our short version where all that’s required is nominating the total number of seats each party will win along with the the winner of the seat of Ashgrove.

Both winners will be rewarded with a year’s subscription to Crikey. And if you are an existing subscriber (as surely all keen political students are) we will not only extend your subscription by 12 months but send you one of our famed Crikey prize packs as well. First Dog might even draw a commemorative bragging rights scroll!

The competition rules are simple. Only one entry each please and you must include your name and email address. Our own Richard Farmer will serve as the judge and sole selector with no correspondence entered into although First Dog has volunteered to serve as the Court of Disputed Returns.

And if you are thinking of waiting until the next opinion poll gives you a better guide than you have now, then note this: in the event of a tie, the entry received first will be the winner. Hasten to the entry forms by clicking on the links below.

Entries to our contest close at midnight on Friday.

Queensland result a disaster for everyone, not just ALP