The Urbanist: does living on the fringe make people sick?

Crikey readers who live in the outer suburbs should sit up and take notice — according to this Fairfax editorial, urban sprawl is making you sick. Moreover, it is “imposing a massive cost on taxpayers, in the form of chronic health and social problems in the new suburbs”. The main villain is car dependency, which the […]

Crikey readers who live in the outer suburbs should sit up and take notice — according to this Fairfax editorial, urban sprawl is making you sick. Moreover, it is “imposing a massive cost on taxpayers, in the form of chronic health and social problems in the new suburbs”.

The main villain is car dependency, which the editorialist claims has led to “an epidemic of ailments caused by obesity, such as diabetes and heart disease, and of mental health disorders such as anxiety and depression”. That’s yet another stain on the already blackened name of outer suburban development.

But is it true? Does the greater car orientation of outer suburban communities mean they’re significantly unhealthier than residents in the rest of the metropolitan area? Or do the real causes of health issues like diabetes and depression tend to be glossed over because they’re far deeper and more intractable than resort to an easy and convenient label like “sprawl”?

This is a big topic so I’ll have to leave the mental health aspect for another time. Instead, I invite readers to consider this list of “the world’s fattest countries” compiled by the World Health Organisation. Australia is near the top of the pile, but there are twenty countries with a higher proportion of overweight people in their population than Australia. Eighteen of these are countries that aren’t usually described as exemplars of sprawl e.g. Nauru, Kuwait, Barbados, Argentina, Egypt, Malta and Greece.

That doesn’t disprove the “sprawl makes you sick” hypothesis of course, but it indicates there are very probably other factors at play beside residential density and car use. Here’s another study that should give further pause for thought. Obesity and the economics of prevention: fit not fat is an analysis by the OECD of the historical change in body weight of selected member countries: 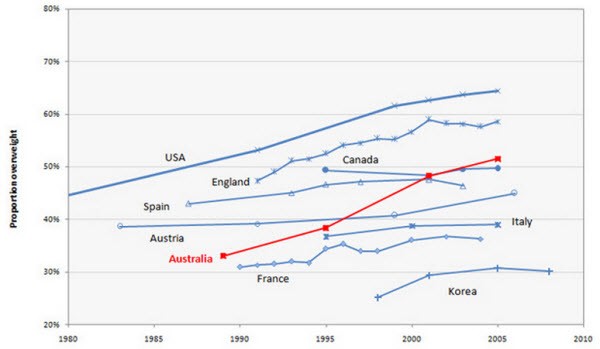 It’s immediately clear that England has a much higher proportion of its adult population classified as overweight than Australia. This was the case for the entire period studied by the OECD. Yet England has a higher average residential density than Australia. It’s also notable that even in 2005, Australia’s score was only marginally higher than Spain’s.

Australia has been an overwhelmingly suburban country for many decades. Despite that, we had a lower proportion of overweight people in 1989 than either Austria or Spain (or England, of course). Moreover, Australia ranked only marginally higher than Italy at that time.

While it might not destroy it, none of this sits comfortably with the “sprawl causes obesity” hypothesis. But there’s another aspect to consider, too. The OECD data tells us the proportion of Australians who were overweight in 1989 was 33%. By 1995 that had jumped sharply to 38% and by 2005 it had skyrocketed to 52%.