This Saturday Queensland heads to the polls to elect a premier, with Liberal National Party leader Campbell "Can-Do" Newman expected to cruise to victory over current Labor leader Anna Bligh.

This Saturday Queensland heads to the polls to elect a premier, with Liberal National Party leader Campbell “Can Do” Newman expected to cruise to victory over current Labor leader Anna Bligh.

Crikey‘s William Bowe of Poll Bludger offers up his analysis for the political bloodbath expected this weekend:

“I’m tipping Labor to lose everything on a margin of up to 8.5%, though no doubt the swing will not be quite as clean as that and I’ll be wrong on a fair few seats either side. I’m giving Labor the benefit of the doubt in Thuringowa (8.5 per cent) because of the Townsville storms and Mulgrave (8.1% because Curtis Pitt is due for a sophomore surge. No rabbit out of the hat for Kate Jones in Ashgrove. I’ve been blowing hot and cold over Katter’s Australia Party, but their 8% showing in Galaxy has switched me to hot: One Nation managed three seats on similar numbers in 2001. I’ve never been in much doubt that Shane Knuth would win Dalrymple, and I’m giving them Mount Isa and Nanango as well. Nobody’s discussed the three sitting independents much that I’ve seen, but I suspect Chris Foley and Peter Wellington might be in trouble in Maryborough and Nicklin. I’ll give them the benefit of the doubt though. Totals: LNP 64, Labor 19, KAP 3, Independents 3.”

Brisbane Times’ Tony Moore and Marissa Calligeros interviewed an academic, a leadership coach and former colleagues of the leaders to examine what makes these leaders tick and also offer analysis of their clothing choices — that key election campaign coverage staple:

“Professor [Robyn] Hollander [an expert in political representation and public policy at Griffith University] said their differing backgrounds was reflected in the way both appealed to voters.

‘Think about the last election campaign and the way Anna Bligh was dressing last time – it was very more sharp suits,’ she said.

‘And this time she looks like someone’s mum and I thought that is exactly the way she wants to look.

‘For the debate it was a white power suit, but for most of the campaign it is shirts with skirts or jeans. Or T-shirts. Pink T-shirts.

‘It is trying to recapture I think the floods, when I think she was the mum and everything will be all right. ‘I know it’s awful, but we can fix this’.”

Professor Hollander said Mr Newman had a completely different appeal to voters and to his party.

‘Campbell is the Can-Do, the open neck shirt, the out-there attitude,’ she said.

‘It is partly voter-appeal, but I suspect it is the way they see the job and the way in which they lead ‘the team’.”

A Liberal National Party billboard declaring “Chuck Norris would vote for us” was defended by the LNP as just light-hearted fun, but political analyst Paul Williams told the Courier-Mail that the jokey strategy could backfire since Norris is known in the US for his highly conservative beliefs.

“It’s always a risk when you go out on a limb and stray away from the more pedestrian political advertising that the message will be distorted,” said Williams. “One interpretation is people saying ‘Chuck Norris is a right-wing extremist, I don’t want to vote for a party that aligns themselves with that’.”

Journalists tweeting the QLD campaign trail may have copped some criticism from Media Watch in recent weeks, but Brisbane Times journalist Daniel Hurst offers up some amusing photos and observations as he covers the Newman campaign beat.

@danhurstbne Photo: Is this the “track” @Campbell_Newman wants to get the state back on? 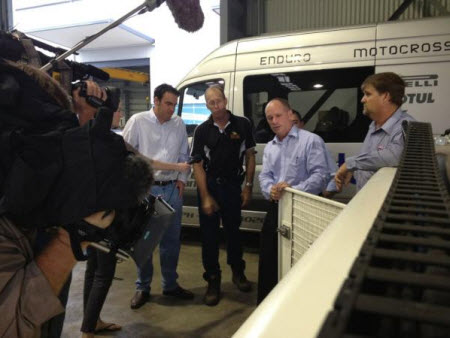 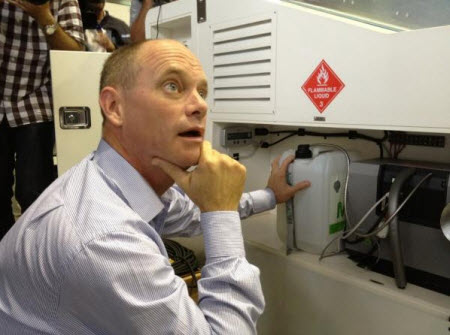 Yet there remains the possibility that Newman won’t even win the seat of Ashgrove, with incumbent Labor MP Kate Jones and her strong “Keep Kate” campaign. If Newman doesn’t win, Lawrence Springborg leads the Galaxy Poll as the likely replacement, reports the Sunshine Coast Daily.

But there’ll be no rest for Newman (or whichever LNP leader is the new premier), with an industrial battle between the Electrical Trades Union and Ergon firing up just as the new premier takes over, writes Steve Wardill in the Courier-Mail:

“Queensland could be headed for a massive industrial brawl to rival the infamous SEQEB dispute in the 1980s, with claims state-owned power distributor Ergon Energy has been secretly plotting a new era of outsourcing.

Leaked company documents show Ergon is planning a “Major Projects” unit, which would be responsible for distributing more than 45%t of its capital works program and private projects.”

After Saturday’s election, how long will it take for the victorious pineapple party [LNP] to discover a budget black hole? Sunday afternoon perhaps?????

There is an old nutter called Katter
Who appears to have little grey matter.
He admonishes gays
For their innocent ways.
The man is as mad as a hatter!

Where is your Clive Palmer story? It was big last night and it is bigger now. Along with the Katter Party allegations over how to vote cards this goes to Cambell Newmans integrity. It also goes to honesty and integrity of Tony Abbott.
Now you have Senator Bob Carr, The Treasurer weighing in. Just minutes ago Senators Brown and Milne made clear that colourful character remarks from Mr Abbott on Channel Ten were not good enough. This is an issue he cannot laugh off.
They claim the Conservatives led by Mr NewmAn and Mr Abbott respectively have to repudiate these defamatory remarkks.

This raises the question can voters, most immediately in Queensland and Australia in general trust the honesty nd integrity of conservatives receiving money from and not repudiating allegations of. CIA conspiracy to destroy coal mining in Australia and this Queensland magnate in particular.

[“Where is your Clive Palmer story? It was big last night and it is bigger now. Along with the Katter Party allegations over how to vote cards this goes to Cambell Newmans integrity. It also goes to honesty and integrity of Tony Abbott. “]

No one cares, Blights GOORRRRRNNNN.

If you want the big news story of the week lets talk about Blights defamation comments about Newman, her multiple CMC flops and what responsibility she takes for the Brisbane flood disaster.