Front page of the day. This morning, Brazilians woke up to read about the death of 21-year-old student Roberto Laudisio at the hands of a police Taser. “Brazilian killed by police in Australia” reads a story on the front page of Brazilian newspaper Folha De S.Paulo today: 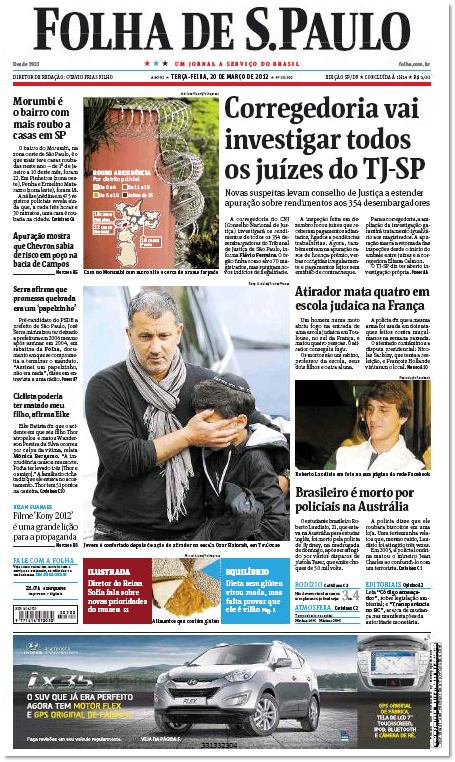 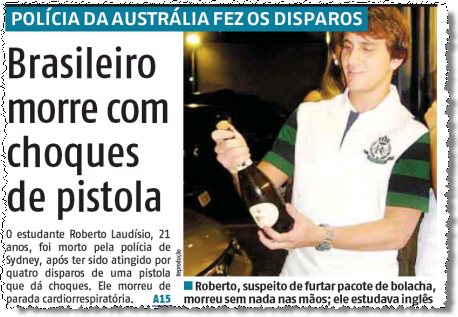 The caption under the image of a cheerful Roberto reads: “Roberto, suspected of stealing pack of wafers, died empty-handed; he studied English.” It won’t endear Australian police to our Brazilian friends.

The incident is now a PR disaster here and in Brazil, with the ABC reporting: “The Brazilian foreign ministry has now ordered its consulate in Sydney to assist the dead man’s family and ‘obtain the necessary clarifications from the Australian authorities’.”

The Department of Corrections. The pitfalls of Twitter as a source #324: yesterday’s Cairns Post carried a clarification apologising to ALP candidate for Cairns Kirsten Lesina for printing a tweet that was in fact from a  “fake”  Kirsten Lesina. The fake tweet “of the day”: 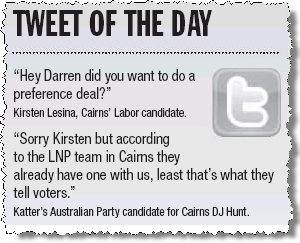 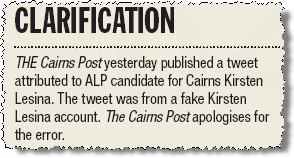 “A new brawl is looming over rules that keep major sports events on free-to-air TV as Communications Minister Stephen Conroy introduces anti-siphoning legislation that will ensure the biggest games remain accessible to all viewers. ” — The Australian

“Sydney’s Sutherland Shire, soon to be home to the Ten Network’s upcoming dramality series The Shire, has publicly expressed opposition to the program.” — Media Spy

“The Sun‘s Sunday edition suffered a surprise slump on its fourth weekend, losing more than 300,000 in sales, leaving the circulation of Rupert Murdoch’s new weekend tabloid hovering at just over 2.3m.” — The Guardian

NY Times to cut free online article allowance by half

“The New York Times has announced that from next month it will only allow access to 10 articles a month for free online before payment is required, compared to the 20 it allowed when it first launched its paid-content model in March last year.” — journalism.co.uk

How BuzzFeed mines the internet for video gold

“In a Dickens novel, Andrew Kaczynski would be The Ghost of Statements Past — haunting political candidates with visions of years-old contradictions, hypocrisy or embarrassment they would rather forget.” — Poynter

“Headlines like ‘A Robot Stole My Pulitzer!’ tend to get journalists a bit worked up about the future of their industry, and the recent piece from Slate‘s Evgeny Morozov, which bears that very headline, is no exception.” — The Atlantic Wire