Campbell Newman knocks Julia Gillard off the top of our list for only the second time this year.

Campbell Newman looks set to scrape into the seat of Ashgrove by a knife edge, taking the LNP to victory over Premier Anna Bligh whose Queensland election campaign has been arguably too long and ultimately too negative. He knocks Julia Gillard off the top of our list for only the second time this year.

Thanks to lobbying and political compromise further south, the mining tax that was passed by federal parliament this week is barely recognisable from the recommendations of one Ken Henry back in 2009. Yet a mining tax it is and Gillard will claim it. It’s more than her predecessor could manage; his stance on the issue tipped his leadership over the cliff.

Meanwhile Tony Abbott continues to be overshadowed despite significant coverage from overstepping the mark with comments around the death of Margaret Whitlam. This all serves to remind us, folks, the only certainties in life are death and taxes. Of course, there’s room for illness too, as Craig Thomson has so ably shown. 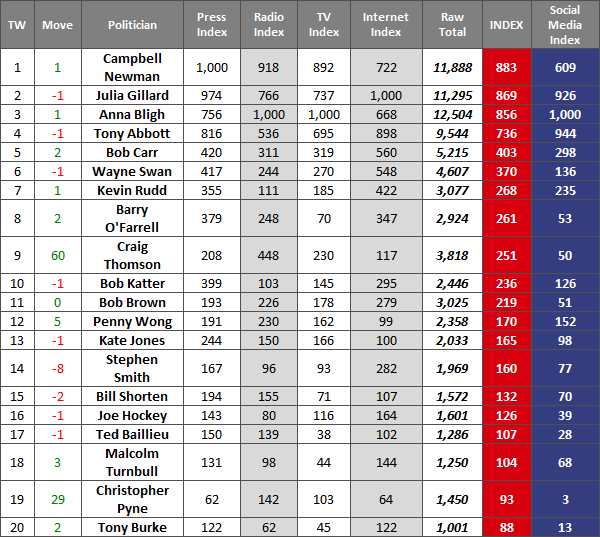 Most online discussions about Bligh and Newman referred to the live debate aired this week. Many tweets congratulated Newman for beating Bligh despite most pundits awarding bragging rights to the premier.

Go figure. An Irish Aussie Rules legend. And a pioneer of broader cultural forces busting down the doors to a parochial sport. RIP Jimmy.