Job cuts at Optus on the way. Seems we were onto something yesterday when we tipped that Optus was preparing to sack hundreds of workers. Its put out a statement today confirming cuts, but a spokesperson calls the figure we were whispered — 700 redundancies — “pure speculation”. “Redundancies are likely to result from this […]

Job cuts at Optus on the way. Seems we were onto something yesterday when we tipped that Optus was preparing to sack hundreds of workers. Its put out a statement today confirming cuts, but a spokesperson calls the figure we were whispered — 700 redundancies — “pure speculation”.

“Redundancies are likely to result from this review however we are still working through the details and are not in a position to comment on how many people are likely to be affected at this stage,” the company spinner said. “Over the past few months we have been undertaking a review of our business aimed at creating a stronger organisation with a clearer focus on the customer.”

Is Paul Zahra out at David Jones? Speculation is swirling in business circles about just what David Jones will announce to the market tomorrow. The company has gone into a trading halt ahead of its half-year profits announcement tomorrow, but there’s speculation — including on Melbourne radio this morning — that chief executive Paul Zahra is out. DJs is denying the talk.

AFP presence doubles in sleepy Balmain. Remember the AFP officer keeping a close watch on Balmain? He now has a friend. A local resident offers this breaking update:

“There now seem to be two AFP cars and officers allocated day and night. The question remains who or what are they protecting and what criminal and possibly violent activity are they there to prevent? Personally I don’t look forward to a drive-by shooting in Balmain, nor to an assassination or abduction in the Darling Street shopping centre. If those possibilities are the product of my fevered imagination and they are only expecting a protest or demo wouldn’t they be more usefully employed elsewhere?”

Greens motion on Serco docs downed. Crikey reported yesterday on a motion forwarded by Greens Senator Sarah Hanson-Young calling on Immigration Minister Chris Bowen to immediately release Serco’s 2011 and 2012 training manuals. The motion — not reported by any other media — was defeated, 34 noes to 10 ayes. Meanwhile, ABC Darwin reported this morning that asylum seekers were so traumatised by the experience of immigration detention that “many” had attempted suicide and that Royal Darwin Hospital was struggling under the strain of repeated admissions.

NSW power rebates expensive proposition. Barry O’Farrell will offer NSW residents rebates on their electricity costs with the savings from merging providers. But it could be an administrative nightmare, says one Crikey reader:

“Feedback from friends in the NSW electricity industry says that the government has not thought through how the practical details of the electricity rebate announced yesterday day is going to work. There is apparently no existing state government system that tracks family size and income. This will be an expensive way of administering a small rebate.”

Canberra affairs of the heart. Yes, we’ve heard the one about the journalist and the senior federal government spinner. None of our business …

Thomson’s credit card location. We don’t want to kick a man in his sick bed. But this image of Craig Thompson’s X-ray has been doing the rounds. So that’s what happened to it … 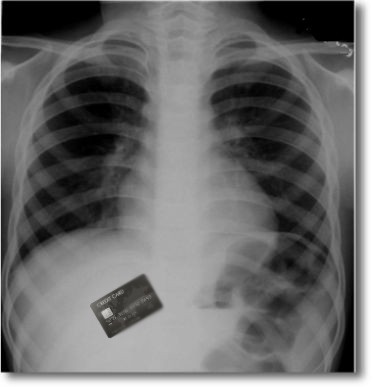 Theatre company’s launch leak. The 3AW Rumour File reported this morning that a “well-known theatre company” will produce runs of Broadway classic Gypsy and Mel Brooks spoof The Producers in 2012. We reckon that’s Jeanne Pratt’s Production Company, which produces three shows at the Arts Centre in Melbourne each year. Pratt is hosting a season launch at her Kew estate next week.