In today's Meda Briefs: 7.30 punks Fitzgibbon with erect bananaMurder ... Is Young Talent Time's time up? ... Did I write that? ... The Department of Corrections and more ...

7.30 punks Fitzgibbon with erect banana. An eagle-eyed Crikey reader commented this morning: “Check out the footage of the 7.30 interview with Joel Fitzgibbon [the ALP federal member for Hunter and Chief Government Whip] . Does the fruit bowl behind him look a bit ‘dicky’ or is it just me?” So check we did, and we were disturbed to find out the tipster was right on the money … 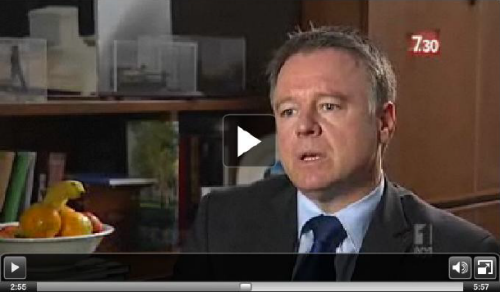 Here’s a close-up of the offending fruit arrangement: 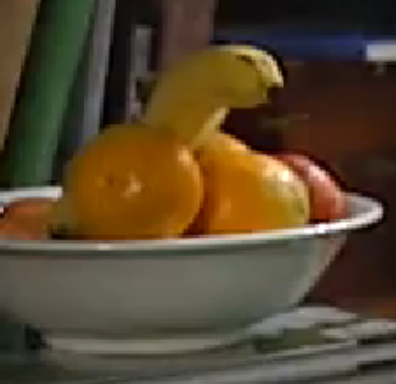 Fitzgibbon told Crikey this morning that the ABC had deliberately erected the banana before the interview began.

Is Young Talent Time‘s time up? Channel Ten has announced that Young Talent Time, one of the high-profile programs signed off by interim CEO Lachlan Murdoch last year, is shifting to the Friday evening slot. This is after its performance on Sunday night (689,000 metro viewers) confirmed that it was a turkey. Ten attempted to spin the bad news and bury the fact that a high-profile, prime-time program had failed in a key timeslot and was being dispatched to one of the week’s graveyards, Fridays at 7pm.

The program has shed more than 400,000 viewers since it started as part of Ten’s “Super Sunday” line-up in late January. It is another failure for Ten’s head programmer David Mott (not Tony Mott as someone wrote in today’s Australian Financial Review). Ten’s going all out to try and make this Sunday night a winner with the Homeland series ending its current fun with a movie-length episode at 8.30pm. Why you’d think the whole thing had been planned, if you took this statement in the Ten release at face value:

“David Mott, Chief Programming Officer, Network Ten, said; ‘As we move through the year we will continue to reinvigorate our Super Sunday line up and our move this weekend of The Biggest Loser to Sundays at 6.30pm is perfect timing as the competition really takes hold.'”

“We’ve built Friday nights as a space for family friendly entertainment, fun light programming and now the perfect fit for Young Talent Time as it heads into the big semi final and final weeks.”

I’d be now keeping a close eye on the growing rumours that Seven’s Adam Boland is headed for Ten in 2013 (he’s close to Ten CEO James Warburton, who was sales boss at Seven). Boland’s job next year is said to be in programming …  — Glenn Dyer

Did I write that? In a story from Bloomberg in this morning’s Australian Financial Review about German plans to build a host of new offshore wind farms, the following paragraph appeared:

“The program will cost 200 billion euros (248 billion), a third of annual gross domestic product, according to the DIW economic institute in Berlin.”

The Department of Corrections. Today’s DOC comes via Jim Romenesko’s website, jimromenesko.com, for pointing out this hilarious, if awkward, Washington Post correction on its correction: 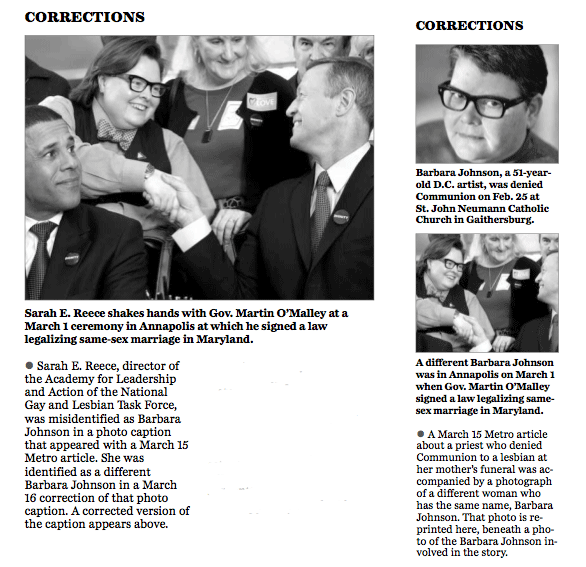 Mark Thompson, head of the BBC, to step down

“Mark Thompson, who has overseen the British Broadcasting Corporation’s television channels, radio stations and web sites since 2004, will depart the public broadcaster later this year, he said Monday.” — The New York Times

“Apple announced on Monday that it has sold 3 million new iPads since the device launch on March 16.” — Mashable

“Given the tenor of the condemnation, you would think I had concocted and elaborate, fanciful universe filled with furnaces in which babies are burned to make iPhone components.” — Mike Daisey

“When I was in college, we didn’t have Twitter. But if I had, there are plenty of accounts I would have followed closely — and they would have extended far beyond my own social circle.” — 10,000 Words

Which only leaves the question of what the ABC used to arouse the banana.

I think it was the same technique used to arouse the vase and two balls in the background behind Andrew Bolt on Insiders. Don’t think this decorative arrangement has followed him to channel 10.