A currently-serving ABC Radio presenter voiced the notorious Bob Katter Australian Party attack ad roundly condemned by all sides of politics and has been stood down by the broadcaster.

An ABC Radio presenter revealed as the voice of the notorious Bob Katter Australian Party attack ad — roundly condemned by all sides of politics — has been stood down by the national broadcaster.

Suzanne McGill, a casually-employed Saturday breakfast host of ABC South West WA local radio, is named at the end of the ad as the voiceover artist responsible for delivering homophobic lines like “the LNP leader supports gay marriage, just like Greens leader Bob Brown” and “is a vote for LNP leader Campbell Newman a vote for gay marriage?”

After a pro-gay marriage blog speculated over the connection, and following Crikey‘s inquiries to the ABC, a spokesperson said a formal investigation will now be held into McGill’s involvement.

“It can be confirmed that Ms McGill did not seek nor obtain permission for external voiceover work, as required under ABC Editorial and Workplace behaviours policies,” the spokesperson said.

“ABC Editorial and Workplace Policies apply to all staff, regardless of employment status. To that end, the ABC will conduct  a formal investigation. Ms McGill will not be on air while the matter is investigated.”

According to the ABC’s editorial policies covering “independence, integrity and responsibility”, the “external activities of individuals undertaking work for the ABC must not undermine the independence and integrity of the ABC’s editorial content”. Its specific Queensland election policies reiterate its commitment to impartiality and independence given the trust thrust upon the government broadcaster by the voting public.

McGill could not be contacted this morning.

In addition to her ABC work, McGill is employed by Abe’s Audio, doing spots for a range of clients including furniture retailers and flower shops. An Abe’s spokesperson confirmed that the company had been involved in the production of the Katter spot.

Other elements of the ad have also attracted criticism. The pixellated image of the gay couple used in the ad was quickly chased by crafty Googlers to this copyrighted stock image from a French photo house. 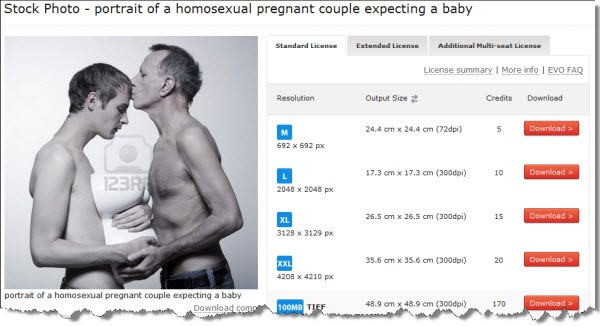 The Katter strategists behind the ad depart from the usual Australian template, employing many of the tactics incorporated in US versions including sinister keyboard lines, slow pans and zooming, repetition and horror movie-style cut-ups.

The ad appears to be strongly influenced by this notorious 2008 effort from US conservative political action group the “American Issues Project”, linking Weather Underground founder Bill Ayres to Barack Obama. “Do you know enough to elect Barack Obama?” the haunting voiceover asked.

University of Melbourne political ad expert Sally Young told Crikey this morning that while the US-aping approach was usually a rarity, Australia has a storied history of negativity, including attacks on Robert Menzies, Gough Whitlam and the Libs’ recently-reprised “Kevin O’Lemon” and “Latham L Plates” series.

“It’s very presidential in style … the production values are really cheap and nasty and the use of the image is interesting,” she said. “Obviously they didn’t want to get a real image of a gay couple in case they repudiated them. It’s very American…there’s no sense of humour about it and it’s actually quite vicious.”

Overnight, The Guardian posted a helpful primer to the current slate of GOP primary attack ads which have much higher production values. The all-time best attack ad — so famous that it has inspired its own “index” — is this 1988 George HW Bush spot highlighting Michael Dukakis’ “weekend prison passes” that allowed criminal Willie Horton to commit rape and murder.

Then there’s this amazing mash-up on the 1800 presidential election. “John Adams is a blind, bald crippled, toothless man who wants to start a war with France,” the ad begins. “When he’s not busy importing mistresses from Europe he’s trying to marry one of his sons to a daughter of King George.”

A political insider contacted by Crikey this morning named a classic of the Australian genre as a 2007 NSW election Labor ad targeting Peter Debnam’s ownership of a failed prawn hatchery and a gym.

Another leftist at the ABC! …Oh, wait, scratch that. The tired old myth of the ABC as a leftist hive does not fit the facts.

Shockingly homophobic. That’s a factual statement and a legitimate question god damn it.

I would hope it is poor judgement on her part – but as another part time employee who has one of these clauses in my contract it would put her in a difficult situation.
As the ABC could offer her only a part time job of course she had to get work elsewhere – and is she meant to take another part time job as a cleaner so it doesn’t conflict with her ABC announcer?
I think it’s a little sad that someone so far down the food chain gets the hit.

And yet Their ABC can have IPA paid casual commentators on the Drum that never have to announce their political and corporate affiliations when commenting on relevant issues.