Age film critic and senior writer Jim Schembri has been sacked from his position following revelations he had repeatedly dobbed on the employers of his Twitter critics and hinted at taking legal action under the auspices of Fairfax Media.

Schembri walked after Twitter sting. Age film critic and senior writer Jim Schembri has been sacked from his position following revelations he had repeatedly dobbed on the employers of his Twitter critics and hinted at taking legal action under the auspices of Fairfax Media. Crikey understands the buff met with Age editor Paul Ramadge this week after Crikey — and later The Australian — ran stories on the saga. An initial agreement to bring forward a pre-booked slab of leave to cool off appears to have been shelved, with Ramadge deciding instead to cut his losses.

Schembri is an Age veteran, starting at the paper in 1984 after previous stints as a copy boy for TV Week and New Idea. Sources inside The Age newsroom told Crikey this morning that Schembri had worn out his welcome with management after several public controversies, including last year’s “How I Punk’d the Twitterverse” scandal in which he reverse-engineered an elaborate ruse to explain a review that spoiled the ending of Scream 4. Rather than admit the error, Schembri penned a think piece for the paper’s storied Insight section explaining how he had set out — in advance — to confound his Twitter critics.

Some Media House scribes say The Age should have demonstrated a better duty of care over the years given Schembri’s unpredictable behaviour, but others say “he was given an enormous amount of slack” by management. Fairfax Media spokesman Brad Hatch declined to comment when contacted this morning. — Andrew Crook

One less woman on the airwaves. Yesterday Crikey ran a story about the lack of women in commercial AM radio, with FiveAA host Amanda Blair spilling the beans on the blatant s-xism she’s encountered in radio. Yesterday afternoon Blair resigned from her popular afternoon spot on Adelaide radio, a decision she said she’s been mulling over for six-months. Instead Blair wants to focus on her family (she’s got four kids under seven) and will continue to sit on the Independent Gambling Authority and SA Health’s suicide prevention arm boards.

But don’t lose all hope: Crikey readers have pointed out two other women working on commercial AM radio in Oz. Meryl Swanson does the midday-3pm every weekday on Sydney’s 2SM, so apologies to Swanson. And how could we forget 2UE’s Sharina, who hosts Psychic Encounters — where she offers “her mystical insight, tarot and numerology abilities” — every Sunday night. — Amber Jamieson

Family newsletter from Aunty. In an email to all ABC staff, Mark Scott announces Angela Clark as the new director of innovation and Bruce Belsham as head of current affairs:

During the past decade, the ABC has developed a strong reputation for innovation, constantly finding new ways to connect with and engage our audiences. Developments like iview and our host of ABC mobile apps have shown real leadership in the media sector in Australia, along with groundbreaking work online and in digital television and radio.

Some years ago, we developed an Innovation Division to hothouse and develop content using new technology and applications, as well as to provide a key coordination role for multiplatform development across the Corporation. As you know, Ian Carroll launched this work for us and we remain indebted to Ian for his passion and vision.

One of the things the ABC has learned along the way is that innovation is everyone’s business and a hallmark of our success has been the way cross-platform development has been prioritised across all our divisions as well as through outstanding work from the Innovation Division.

Today we are making some important changes that will strengthen the focus of the Innovation division and ensure our continued commitment and capacity to innovate across the ABC.

I am delighted that Angela Clark will be joining the ABC Executive as Director of Innovation. She is a very experienced media executive with a passion for what digital media can bring to local communities in a fragmenting media environment.

Angela is a real industry pioneer, firstly in bringing a revolution to the outdoor advertising industry with JC Decaux in Australia, then as CEO with Macquarie Radio Network, and most recently as Founder and Director of Streetcorner.com.au & Everymap.com.au.

I am delighted Angela will join the ABC and help shape our digital future in this important role. She will start with us on 19 March and I know you will make her welcome.

Today we are also announcing Bruce Belsham’s appointment as Head of Current Affairs in the News Division with expanded responsibility for some Innovation portals, including The Drum. There are few more important jobs in the ABC and I am delighted Bruce will be returning to the News division in this vital role. As many of you know, Bruce has over 20 years experience across a wide range of documentary, factual film and television, was EP of Four Corners and also established Four Corners’ highly regarded broadband presence.

Bruce’s most recent experiences in online and multi-platform content, along with his extensive editorial knowledge and experience, will be particularly significant as ABC current affairs programs continue to take advantage of new ways of reaching audiences.

It has always been our thinking that some ABC content offerings developed in the Innovation division would eventually migrate to a relevant content division. The time is now right for a number of our aggregated portals and their teams to make this move. Bruce will continue to have oversight for The Drum and the Environment and the Technology and Games portals which are moving to the News division. At the same time, The Religion and Ethics portal will make the move to the Radio division.

During Ian’s illness and in recent months, Bruce and Abigail Thomas have provided outstanding leadership and continuity for the Innovation team. I want to thank them for their dedication and commitment to their team over many months. They worked together with great professionalism and all of the ABC is in their debt.

A short time ago Abi advised me that she had been offered a wonderful opportunity at Deloitte’s Online Consulting team, and after more than a decade with the ABC, felt it was the right time for a change. She has been one of our leading innovators and is highly regarded throughout the digital media industry. I want to thank her for her outstanding contribution as Head of Strategic Development and wish her every success in her new role.

Bruce and Abi will move to their new roles in early April and Gabby Shaw will take up the role as the Acting Head of Strategic Development in Innovation.

Mitchell v Manne v Crikey (if you care). This morning The Australian ran a follow-up on an intra-media spat of probably only passing interest to the general population — Oz editor Chris Mitchell’s annoyance at Robert Manne for launching a pre-emptive strike on The Monthly’s and the ABC Drum website against a story on grant funding journo Ean Higgins hadn’t even published yet. Aside from minor errors such as the timing of Mitchell’s quotes to Crikey (Wednesday, not “yesterday”), media diarist Nick Leys included the following curious line:

“In comments published on Crikey in response to Mitchell — but before his comments were actually published, indicating Manne saw them prior to publication — Manne said it was ‘astonishing’ that Mitchell did not know about the FoI documents on his funding.”

Now, we’re not sure what that means, but to take a stab: Leys may be suggesting Crikey had provided Manne with Mitchell’s quotes in advance and then published them before Mitchell’s. In fact, Crikey first published the story on Mitchell marshalling his lawyers on Wednesday afternoon — first with Mitchell’s quotes, and then Manne’s when we obtained them about an hour later (in between the story carried a “Robert Manne has been contacted for comment” line). Later that night Manne added additional comments in the story’s comments thread. — Andrew Crook

Front page of the day. Yes, we use a lot of New York Post front pages, but a n-ked and pregnant Jessica Simpson seems a particular odd choice for a newspaper front page, even for these guys … 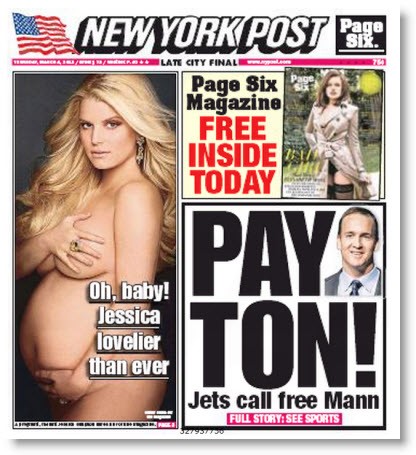 “Pinterest secured $10 million in Series A funding from Bessemer in the spring of 2011, making the company worth an estimated $40 million. Then in October, the company raised an additional $27 million in a round of funding led by Andreessen Horowitz for a total of $37.5 million in capital, which raised its value to estimated $200 million. But experts say that this figure is conservative.” — Social Times

Ita Buttrose gets back into publishing

“Magazine doyenne Ita Buttrose has been appointed chairman of a start-up aimed at helping publishers turn their content into tablet apps.” — mUmBRELLA

Govt to pressure publishers on e-books

“The Justice Department, after months of investigation of pricing collusion between Apple and electronic book publishers, is talking with publishing companies about potential settlements and has been threatening a lawsuit, people close to the investigation said on Thursday.” — The New York Times

Brooks’s solicitor: will client get a fair trial?

“Lord Justice Leveson’s inquiry, and the other bodies investigating these events, have each been doing their job, and should not be criticised. But what is left is a deep sense of unease. There are a number of individuals out there whose reputations have been traduced. Few people know the impact of such publicity on their lives, and the depth of stress and worry they have had to bear. But each of us knows enough to question whether the public interest and the legal premise of ‘innocent until proven guilty’ have been served by what we have seen and heard.” — The Telegraph