I’m going to stick with the trend. A glance at the graphs below is enough to show that trend figures give a more helpful idea of what is happening on the jobs front than the more volatile seasonally adjusted figures.

The Australian Bureau of Statistics reported this morning that in February: 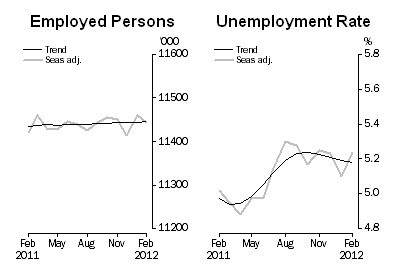 A disheartening indication in that lot to suggest that the slow growth rate revealed in yesterday’s December quarter GDP figures has continued into this year.

And for the critics who tend to appear with comments every month that the official unemployment figures do not give an accurate reflection of how bad things really are some other assessments provided by the ABS this month: 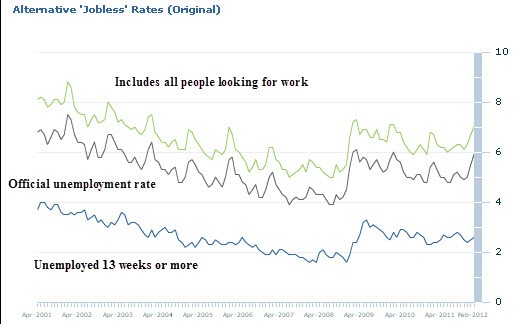 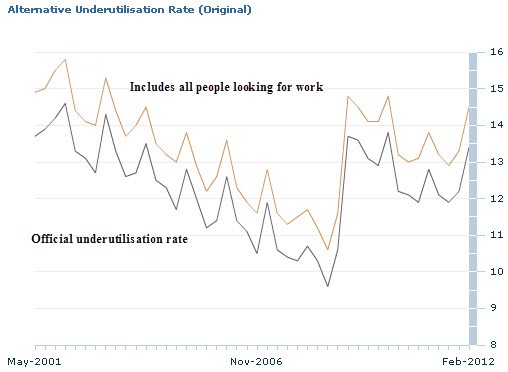 By looking at the group of people who work fewer than 35 hours and would like to work more hours, the ABS produces a series called the underemployment rate, and, when combined with the unemployment rate, produces estimates of the total potential labour supply, the labour force underutilisation rate.

An alternative measure of available labour supply  includes the group who are considered marginally attached to the labour force. Like the alternative “jobless” rate, the “jobless” component of this measure includes all people who were looking for work regardless of whether they were actively looking for work or not, and does not exclude those that were not available during the specified time frame.

This estimate, says the ABS, is probably the broadest view of dissatisfaction with hours of work available, looking at all people who are unemployed under the economic point in time definitions, plus the more broadly “jobless” who are marginally attached and/or discouraged, as well as those who have found jobs but are dissatisfied with the number of hours they work. Currently, the official underutilisation rate is 13.4% (in original terms); while the alternative measure of underutilisation is 1.1 percentage points higher and stands at 14.5% for February 2012.

Free beer for the workers next? It’s the kind of promise that should be a vote winner for the deprived drinkers in Aboriginal communities but I’m not sure how it will go down with previous victims of alcohol inspired violence.

“Our ultimate goal is that Aboriginal people in this state in the future should have the same deal as any other Queenslander,” he said yesterday.

“What’s been put in place is just a temporary Band-Aid. Why is it that an Aboriginal worker cannot come home to a home they own, have a beer sitting on their front porch? T

“The reason they can’t … is Anna Bligh and Labor’s policies are designed to keep them trapped in welfare forever.”

Psst! Want to buy a p-rno website? Just $65 should do it. Contact Liberal National Party candidate for the Gold Coast seat of Albert Mark Boothman. He’s the man who registered — for a TAFE friend he says — the now dormant DarkOsiris.com. 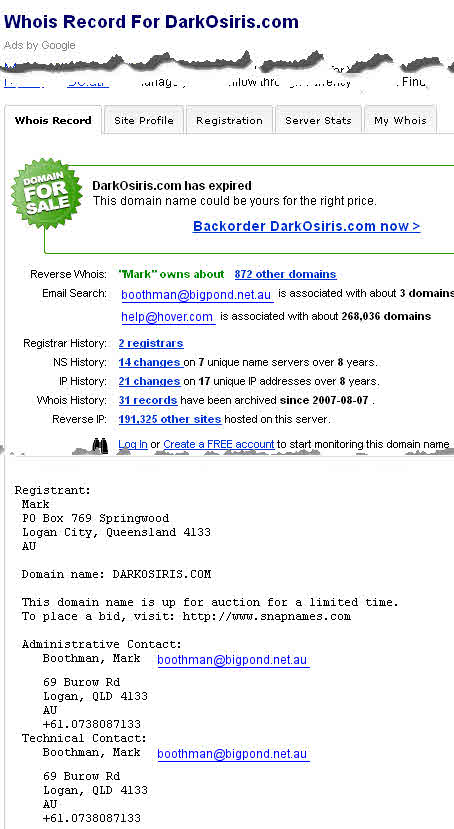 It’s available at auction on snapnames.com with bidding about to close and the winner will inherit whatever goodwill there is in a site that the Gold Coast Bulletin reported this morning used to feature “hot s-x scenes with links including Control Your Bitches.“ 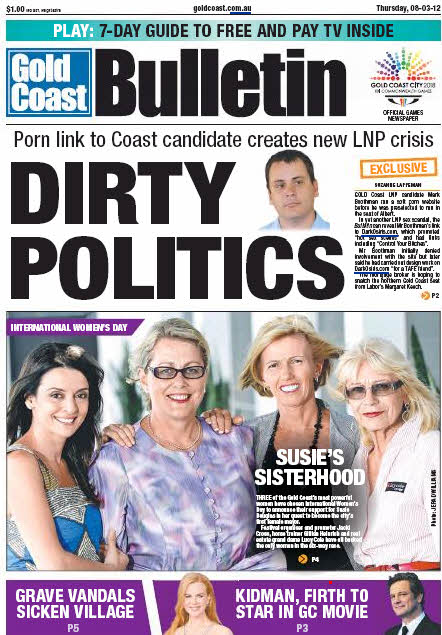 It’s not exactly the kind of headline that LNP Leader Campbell Newman would have fancied as he rose to address an International Women’s Day breakfast in Brisbane this morning.

Candidate Boothman might have told the Bulletin the site was long gone, and he had simply carried out some design work on DarkOsiris.com for a friend, but Mr Newman now has had his campaign diverted into an unwelcome investigation.

And it’s not as if this is the first hiccup the LNP has had on the Gold Coast involving s-xual  questions. The second pre-selected candidate for Broadmeadows was dumped for attending a swingers club four years ago after being chosen to replace the initial choice who stepped down after being caught drink-driving.

They are a sensitive lot about women’s issues on the Gold Coast. The front page was shared between Mark Boothman’s p-rn site and Susie Douglas’s campaign to become the city’s first female and then this on page three: 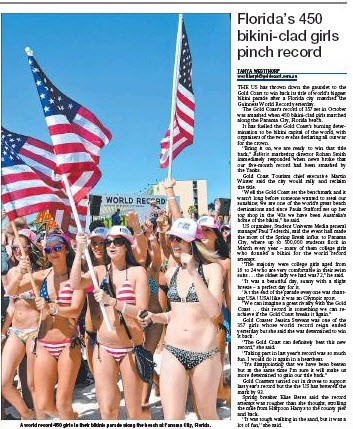 The US has thrown down the gauntlet to the Gold Coast to win back its title of world’s biggest bikini parade after a Florida city snatched the Guinness World Record yesterday.

The Gold Coast’s record of 357 set in October was smashed when 450 bikini-clad girls marched along the Panama City, Florida beach.

It has fuelled the Gold Coast’s burning determination to be bikini capital of the world, with organisers of the two events declaring all out war for the crown.

“Bring it on, we are ready to win that title back,” Bulletin marketing director Rohan Smith immediately responded when news broke that our five-month record had been smashed by the Yanks.

I see the LNP are now claiming Boothman’s site was just for innocent petroheads, and was later “hacked” by pornographers (huh?). Fortunately there is the wayback machine: http://web.archive.org/web/20030320214207/http://www.darkosiris.com/

Some material on this webpage is of adult nature and is not suitable for a person under the age of 18. By clicking on any icon on this webpage you understand the terms and conditions.

What a shame most of the images do not appear to be archived.