Rupert Murdoch's London-based phone hacking, email hacking and bribe-paying newspapers will come under more scrutiny next Monday night in Britain when the BBC screens Murdoch's Satellite TV Pirates. Plus other media news of the day.

BBC has more phone-hacking evidence. Rupert Murdoch’s London-based phone hacking, email hacking and bribe-paying newspapers will come under more scrutiny next Monday night in Britain when the BBC screens the much-speculated special Murdoch’s Satellite TV Pirates. According to an article in The Guardian the report, by Vivian White (who is leaving the broadcaster), sounds sensational:

“White’s last Panorama as a BBC employee, a report to be broadcast on Monday 12 March, is, according to the corporation, ‘an investigation into fresh hacking allegations but at the heart of [Rupert Murdoch’s] pay TV empire … exposing how former police detectives were used to recruit people to break the law in order to bring down Murdoch’s commercial rival’.”

Front page of the day. It’s not really a front page, but the front page of a four-page wrap-around of today’s Australian Financial Review — part of a campaign espousing the AFR‘s “revolution” direction — caught our eye. We know it’s an ad, but its colourful Andy Warhol-esque design is just so damn attractive: 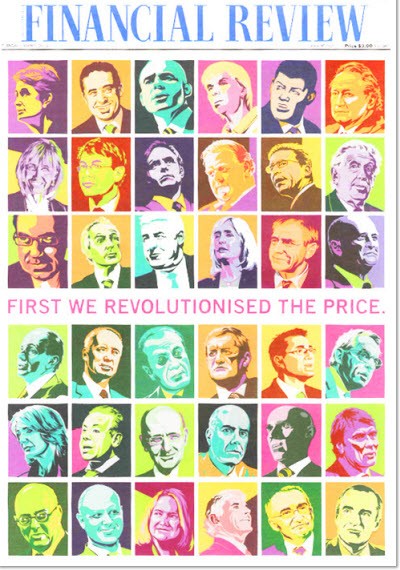 The Department of Corrections. Today’s Adelaide Advertiser apology is even more bewildering considering it ran a story on Thursday, March 1 blaming the “hazardous” weather for causing mayhem on the roads on the Wednesday night … 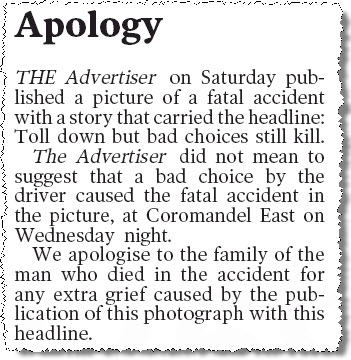 Papers losing $7 in revenue for every $1 in digital gained

“Revenue is just one of the problems facing American newspapers, says a new Project for Excellence in Journalism study. The culture at newspapers, and not just on the editorial side, is as much an impediment to publications finding their way out of the mess they’re in.” — Poynter

“The then commissioner of the Metropolitan police, Sir Paul Stephenson, dined with the former deputy editor of the News of the World hours after trying to persuade the Guardian to drop its investigation into phone hacking, it has emerged.” — The Guardian

“Dame Elizabeth Filkin, author of a recent independent report into relations between the Metropolitan police and the press, told the Leveson inquiry today about alleged “trading” between the two parties, in some cases as a means of preventing certain stories being reported.” — journalism.co.uk

As advertisers recoil, Limbaugh says, ‘so be it’

“Defending himself against a growing ad boycott, Rush Limbaugh told his audience on Monday that the companies that have defected from his radio program have decided ‘they don’t want you or your business any more.'” — New York Times

The perils of live broadcasts

“Spare a thought for Peter Mitchell, Seven’s Melbourne news presenter who forged on with a Live bulletin from Federation Square last night over the protests of an angry mob.” — TV Tonight