Crikey media wrap: Floods in NSW and Victoria continue to threaten homes, with thousands of people evacuated from Wagga Wagga overnight after concerns that levees may break today and inundate the town.

Floods in NSW and Victoria continue to threaten homes, with thousands of people evacuated from Wagga Wagga overnight after concerns that levees may break today and inundate the town.

The Murrumbidgee River is expected to reach 10.9 metres in Wagga around midday. In 1974 the river peaked at 10.75 metres.

“We do have a great deal of concern with regard to the levee breaching,” State Emergency Service regional commander James McTavish announced last night, after an evacuation was announced at 9.30pm.

“People should note that if there is a levee breach, the model we have suggests the CBD area could be flooded within 30 minutes. Do not delay your evacuation … The river is rising very rapidly. Remaining in flooded areas is extremely dangerous and may place your life at risk.”

The expected river peak is the highest in nearly 160 years. ABC journalist Siobhan Heanue tweeted a photo of a flooded Wagga in 1870: 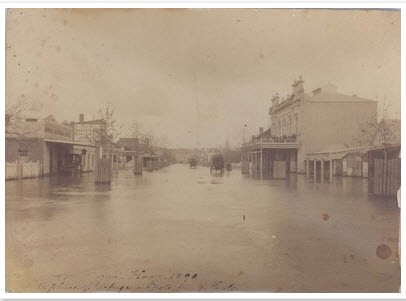 Wagga’s Daily Advertiser is busy keeping people updating on its Twitter feed and homepage and has even set up an email — [email protected] — to receive emails from residents during the flood crisis. It published a map of the Wagga evacuation area: 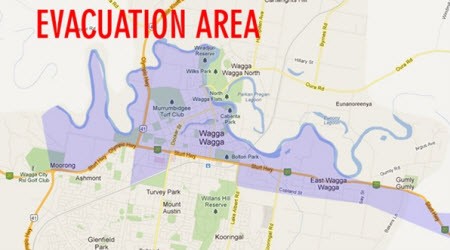 Tweets from Wagga locals show how frantic things have become in town as people evacuate: 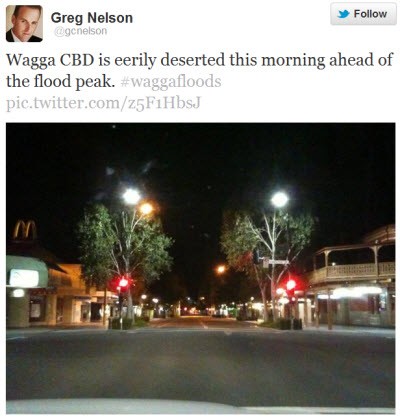 Over 5000 people have been evacuted in NSW

Meanwhile, the tiny town of Nathalia on the VIC/NSW border is madly building a sandbank levee to save homes and businesses, writes Tom Arup in The Age:

“Nathalia is a town in waiting, with a massive operation under way to prepare it for once-in-a-century floodwaters expected to peak on Thursday.

A 750-metre-long temporary metal levee has been built along the banks of Broken Creek, which runs through the heart of the town. It is hoped the levee will prevent 176 homes from being inundated by waters expected to rise to 2.4 metres last night and peak at 3.35 metres later in the week.”

But at least the floods may have saved a few lives:

Authorities said they were particularly concerned about the area north of Shepparton, including the town of Numurkah where flood levels are expected to stay high for several days.

The National Farmers Federation estimates that the NSW and VIC floods could cost upwards of $1 billion because of damage to roads and bridges, fencing and stock losses and destroyed cotton crops.

This is a huge flood,even if the 1974 record is not broken,given that Blowering Dam has cancelled out any contribution from the Tumut catchment above the dam,and that Burrinjuck was at less than 75% initially.

Aljazeera has just reported, via SBS, that people are being moved out of Wag [as in ‘wag the tail]ga Wag [same again]ga.

I am surprised they are not blaming Climate Change? If it was a heatwave that would be a front page story and people would have to Google the name Bob Carr to know who the hell he is.

” of drought and flooding rains” ~ My Country

I wonder why the Federal Government has not yet identified the meanings of words used in insurance policies across Australia so that people actually know what they have insured themselves against. We have been flooded before and we are being flooded again. While those whom we have elected to act in our best interest stuff about while some of us drown! Edward James