Victorian nurses and midwives on Facebook have taken to using code names to discuss protests after the Bailleu government demanded that all comments on the Australian Nursing Federation's Facebook page that "organise, advise or assist" industrial action must be deleted.

Victorian nurses and midwives on Facebook have taken to using code names to discuss protests after the Baillieu government demanded that all comments on the Australian Nursing Federation’s (ANF) Facebook page that “organise, advise or assist” industrial action must be deleted.

A letter written by lawyers acting on behalf of the Baillieu government and sent to ANF lawyers states: “We also require that you confirm in writing that, once deletions have been effected, the ANF continue to maintain its social media websites to ensure that comments of a similar nature are immediately deleted.”

Rather than discussing events explicitly (more than 1000 Victorian nurses have taken part in rolling work stoppages at 15 public hospitals to protest against changes to the patient-to-nurse ratio and substituting nurses for “nursing assistants”)  the updates by the Australian Nursing Federation on its Facebook page do not specify that the photos it posts are of workers taking industrial action.

Instead it keeps all of its official comments very general, referring instead to morning teas, bake offs and barbeques: 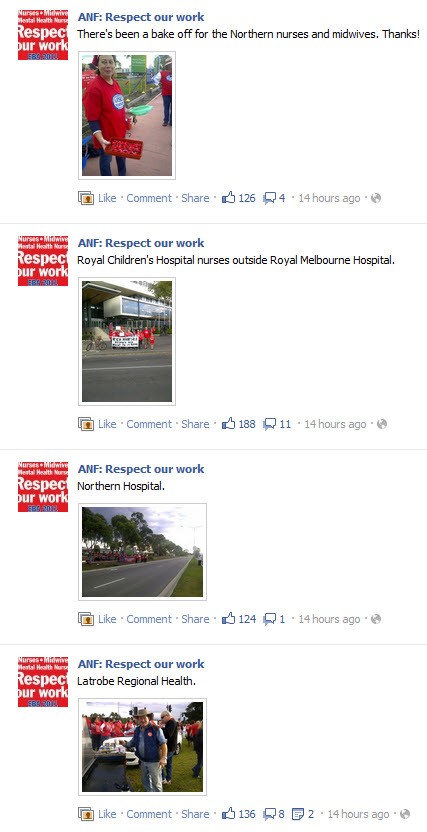 Other ANF nurses have taken to calling industrial action “walking clubs” to try and get around the ban. The following posts all come from the ANF Facebook page (although they were not posted by the ANF): 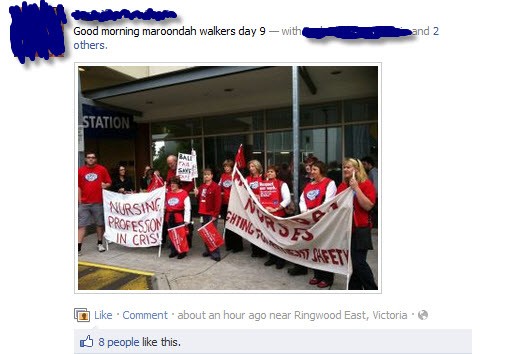 Nurses at Frankston Hospital are expected to protest today and several nurses were referencing “walking” at Frankson this morning: 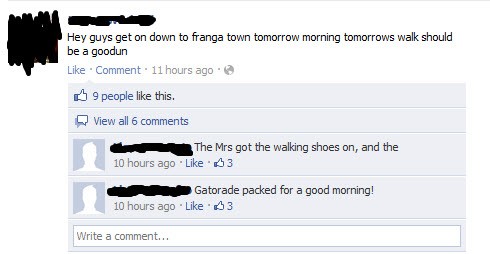 Other mentions are often more explicit, discussing “walkouts”, “stoppages” and nurses having their pay docked even if they are only attending industrial action protests during their breaks. Currently there are hundreds of updates on the ANF Facebook page from this morning alone.

Not that the protesting nurses are discussing the industrial action only on the ANF Facebook page. Many have taken to their own personal Facebook pages — often changing their profile photos to the ANF’s “Respect our Work” poster or to photos of themselves and other nurses standing in their bright red union t-shirts — to post their thoughts on the current dispute and explain why they are taking action: 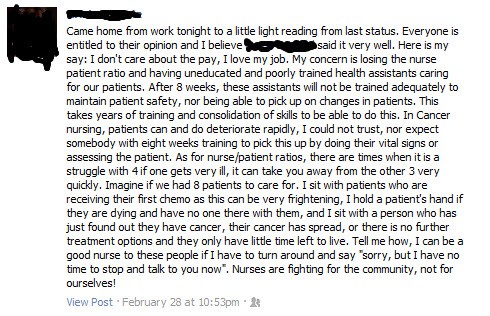 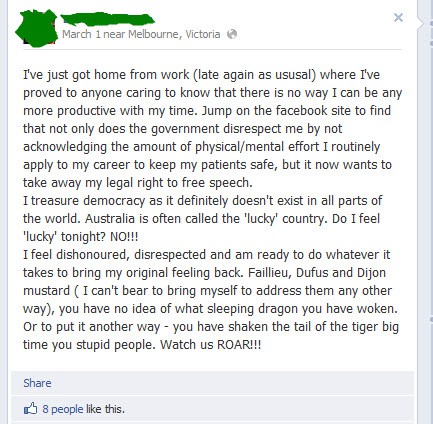 Late last month the Federal Court ruled that the ANF stop its industrial action and ordered that it be restrained from “organising or continuing to organise industrial action” or “directing, inducing, procuring, advising or assisting” any person who doesn’t attend work or doesn’t perform it in the normal standard.

The court also ruled that “aiding, abetting, counselling, procuring or inducing” or “threatening or proposing to engage” in any of the conduct above would also be illegal. It is this ruling that the Victorian government is using to demand that the ANF delete comments off its Facebook page.

Social media is discussed in the judgment, but only in reference to how the ANF must inform its members of the order, noting that “… the ANF has communicated with its members about the rolling stoppages using social networking sites and websites” and ruling that it had to post the following instructive on its Facebook and Twitter accounts:

The ANF said it would not comment to Crikey about the Facebook ban as it is subject to Federal Court proceedings and another court session will be held this Friday. Crikey asked Victorian Health Minister David Davis the following questions:

In response the minister’s office sent Crikey a copy of the legal letter it sent ANF lawyers demanding for Facebook posts on the ANF page be deleted. The letter references a recent Federal Court case involving the Australian Competition and Consumer Commission v Allergy Pathway Pty Ltd “which involved comments made by members of the public on social media sites administered by the defendant, which comments were inconsistent with undertakings the defendant had given to the Court. The Court found that the defendant had published those comments, by not removing them from its site. The Court punished the defendant for contempt of Court.”

Davis’ office also added: “Facebook users have not been, nor would they be, prevented from liking the Premier’s page. In fact, it is not technically possible to take such action.”

At some point we the peoples must retake control of how we are governed by those whom we have given our votes to in trust! Edward James

when ballieu , davis, whoever , are forced to back down by their own unjustifiable and unconscionable ‘instructions to the courts’ (!?), when they grind out a shamefull apology, burst a blood vessel doing so, these very same Nurses will be Smiling in their Care……..

Get someone outside the jurisdiction of Australian courts to set up the ANF page on facebook.

It would be hysterically funny if it wasn’t so serious.

The Federal Court risks dragging its *own* reputation into the gutter, if it persists with this pointless exercise in trying to silence dissent via social media.
Even worse, it involves high profile attacks on the most highly regarded profession in the country.
Note to the pollies concerned: (Both Fed & State) Nurses aren’t wharfies or builders labourers.
They’re *very* popular……..You’re not!
They know how to use facebook and twitter……You don’t!

I feel a little sorry for the Baillieu government – instead of abiding by their promise to rejoin negotiations when industrial action was terminated in November, as Mr Baillieu pledged, they decided to persist stonewalling. And now, almost a hundred days later, there’s no easy way out for the government.
Instead of backing down, Victorian nurses have stood firm, taking strike action (in the form of rolling walkouts) for the first time in over a quarter of a century. Every day this goes on it becomes clearer that the nurses will win – we have the backing of an increasing percentage of the public, we are determined, and we have a legacy of triumphing every time our ratios are threatened.
Had Mr Baillieu and his advisers paid attention to the past they would have seen what’s happened every time a government tried to introduce unsafe changes, or renege on promises. It was this that triggered the bitter 1986 strike, and it’s what keeps my colleagues united.
For months we’ve been confronted by VHIA and the government’s public lies and distortions, simplifications and evasions that would result in poorer patient outcomes at greater expense, with the side effect of gutting the nursing workforce at a time when global shortages threaten the profession in under a decade.
For the government this is a short-term economic proposition that will contribute to a substantial surplus at the end of the financial year, and bolster their claims come election time (two years, eight months an a couple of weeks from now) that they are the more fiscally responsible option.
For nurses this battle is literally for the good of the community, the integrity of the profession and the lives of our patients. We won’t give up, we won’t give in, and we will not forget how the Baillieu government try to sell out the health of the people it was elected to serve.
The longer this goes on the weaker Mr Baillieu will look when he sits down – as he must – to negotiate. In the interim we’ll use the tools available to us – facility with social networking media, a common goal, universal anger that’s only grwing, and the support of those who’ve experienced first hadn the difference skilled nursing care makes.