Those seeking a swift passage through the Italian legal system can also expect a rocky ride, writes Josephine McKenna, a freelance journalist in Grosseto.

Giacomo Brignone has come a long way to express his outrage. He and his wife and young daughter Lina have travelled from the island of Lampedusa off the coast of Sicily to attend a court hearing to relive the Costa Concordia disaster in the central Italian town of Grosseto.

The Brignone family and nine of their relatives were among the 4200 passengers and crew on board the Costa Concordia when it ran aground off the island of Giglio on January 13.  The disaster claimed 32 lives and seven of the victims have still not been found.

“I have come to listen, I want the truth,” an emotional Brignone tells the TV cameras. “We were scared to death.”

The pre-trial hearing was called by magistrate Valeria Montesarchio to establish the parameters of the investigation of the “black box” and enable survivors and other interested parties to register as plaintiffs in the case.

Brignone joined about 200 people including well-heeled lawyers and a string of experts on a sunny Saturday at the Teatro Moderno, Grosseto’s largest theatre, which was converted into a courtroom to handle the onslaught.

The narrow road in front of the theatre was closed to traffic while an array of local and regional police and other uniformed officials stood behind the barricades and chatted to each other.

Sergio Amarotto, another Costa survivor, came from the opposite end of Italy near the northern port of Savona to demand justice.

On the night of the shipwreck, he was trapped on deck four with thousands of passengers and he and his wife escaped on one of the lifeboats long after the ship started lilting.

“I only ever saw one official. Many waiters and cooks gave us a hand. But we had to evacuate ourselves,” an angry Amarotto says.

“I am angry for the 32 people who did not survive,” says survivor Patrizia Bagnazzi. “I want to know what happened and I want justice for the victims.”

In the tiny Piazza Tripoli, metres from the theatre, the TV satellite trucks hum as crowds gather to watch stylish presenters from Italy, Poland and France give audiences the latest update on the inquest.  When a passenger arrives the pack of journalists surges and whisper to each other “Who is this?”

“The whole world is here in Grosseto,” a bewildered woman says as she passes.

At the end of the day Montesarchio gives the prosecutors and the experts a framework to advance their inquiries.

They have 120 days to consider: the details of the ship’s black box; the physical structure of the 114,137-tonne Costa Concordia; security procedures and staff training; and the ship’s movements and what could have been done to avoid the disaster.

But the main protagonist in this ongoing drama captain Francesco Schettino did not come to Grosseto.  He remains under house arrest in his home town of Meta di Sorrento near Naples but his reputation took a further battering nonetheless.

In an interrogation leaked to the media,  first officer Ciro Ambrosio said that Schettino had left his glasses in his cabin on the night of the shipwreck and relied on radar when he was on the bridge.

Even worse,  Ambrosio said that Schettino had ordered his officers to tell port authorities that everything was “under control” in the crucial early stages of the disaster after the ship struck rocks.

Sicilian lawyer Giuseppe Grammatico, who was himself a passenger on the stricken vessel, told journalists outside the court he saw Schettino leave the ship at around 11.30pm with four other officials and said the captain neither slipped nor fell into the lifeboat, as he has claimed.

Schettino is facing charges of multiple manslaughter, abandoning ship and causing an environmental disaster. He now faces a fourth charge of damaging the precious protected natural habitat around Giglio.

His lawyer, Bruno Leporatti, called a press conference and urged journalists to stop belittling his client in what he called a “media campaign”.

He said Schettino would be fully vindicated when the recordings of the black box were analysed and stressed that Schettino had kept the company Costa Cruises “completely and regularly informed” on the night the ship ran aground.

Costa Cruises may have averted another disaster this week when a fire in the engine room of the smaller Costa Allegra cut its electricity and set it adrift in the middle of the Indian Ocean.

Still the company faces a tough future as some estimate the Costa Concordia disaster could ultimately cost it $400 million in hefty compensation.

But those seeking a swift passage through the Italian legal system can also expect a rocky ride ahead.

The locals are adamant: cruise skipper ‘had head up his arse’ 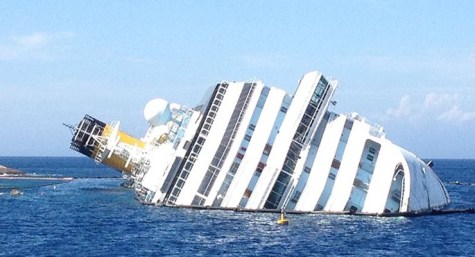 Before Ruby Princess: a short history of cruise ship scandals