Stand by for the budget outrage

It’s going to be an interesting budget. Yesterday’s announcement of the early end of the solar hot water rebate scheme is an indication of that.

A sign of things to come. It’s going to be an interesting budget. Yesterday’s announcement of the early end of the solar hot water rebate scheme is an indication of that. Stand by for many more screams of outrage as the struggle to achieve a budget surplus is unveiled. It is not going to be an easy environment for Labor to increase its electoral support. So stand by as well, dare I write it, for the next round of leadership speculation.

End the pretty pictures. It’s hard to disagree with the sentiments Brisbane’s Courier-Mail expressed on its front page this morning that Queenslanders deserve a better election campaign than the photo opportunities being served up to them. 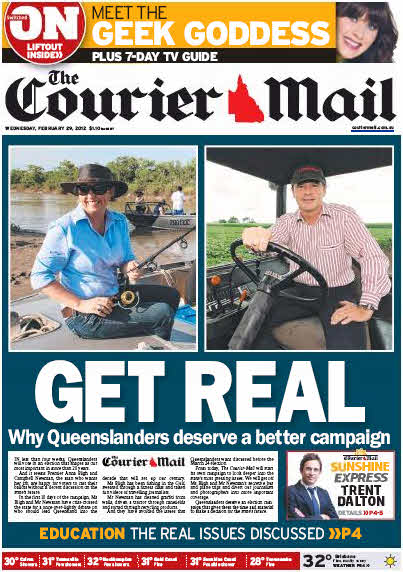 Says the page one editorial:

In less than four weeks, Queenslanders will vote in an election that shapes as our most important in more than 20 years. And it seems Premier Anna Bligh and Campbell Newman, the man who wants her job, are happy for voters to cast their ballots without a decent discussion on the state’s future.

In the first 10 days of the campaign, Ms Bligh and Mr Newman have criss-crossed the state for a once-over-lightly debate on who should lead Queensland into the decade that will set up our century.

Ms Bligh has been fishing in the Gulf, sweated through a fitness class and taken fun videos of travelling journalists.

Mr Newman has cleaned graffiti from walls, driven a tractor through canefields and sorted through recycling products.

And they have avoided the issues that Queenslanders want discussed before the March 24 election.

From today, The Courier-Mail will start its own campaign to look deeper into the state’s most pressing issues. Today we examine the issues surrounding education.

We will get off Ms Bligh and Mr Newman’s secretive bus and plane trips and divert our journalists and photographers into more important coverage.

Queenslanders deserve an election campaign that gives them the time and material to make a decision for the state’s future.

If only the television would follow suit and stop attending photo opportunities. There is plenty not to like about the United States political system but at least they take it seriously with innumerable debates covering all the major issues.

Let them pay 75%. Going into an election campaign with a promise to put up income taxes is not the ordinary order of things but it is what French socialist presidential candidate Francois Hollande is doing. A future government led by him would tax incomes of more than a million euros a year at 75%. La Tribune reports that 20,000 to 30,000 tax households would be affected. The current maximum income tax rate in France is 40%.

A third Bush. Just a little follow up to yesterday’s reference to the talk that none of the four present Republican presidential candidates might obtain a majority of votes before the nominating convention, which would leave the way open for the selection of someone else. I notice that Jeb Bush, the other brother and former Florida governor, has entered the betting lists as the fifth man and given about the same chance of victory as Newt Gingrich.

An inconvenient dash of democracy. Solving the economic problems of Europe became more complicated yesterday when the Irish government decided that it had to actually act like a democracy. The country is to hold a referendum on the latest proposed amendments to the European Union treaty and the vote will in practice end up being a verdict on the policies of austerity the EU has imposed on the country. Combined with the April election of a new government in Greece there are now two votes that have the potential to disrupt the best laid plans of the European governing elite that clearly regards giving the people a say as a terrible nuisance.

Queensland election: what happened on Saturday and why

“The Curry or Maul (depending on party)” hasn’t done it’s part in
nurturing – through it’s sponsorship, and partisan portrayal –
this sort of “politicking”, when it suited?