The Murdoch-owned UK Sun tabloid is embroiled in an illegal government official payment scandal, after the head of police investigations into journalistic behaviour told the Levenson Inquiry of a culture of illegal payments to corrupted officials.

“The cases we are investigating are not ones involving the odd drink, or meal, to police officers or other public officials,” Akers told the inquiry. “Instead, these are cases in which arrests have been made involving the delivery of regular, frequent and sometimes significant sums of money to small numbers of public officials by journalists.”

One official had received over 80,000 pounds from the News International owned paper, while others received regular retainers.

“There appears to have been a culture at the Sun of illegal payments, and systems have been created to facilitate such payments whilst hiding the identity of the officials receiving the money,” said Akers.

The revelations may result in US authorities pursuing Rupert Murdoch’s News Corporation under the Foreign Corrupt Practices Act.

It was damning evidence, reports David Leigh in The Guardian: “Akers’s reference to the systematic nature of alleged corruption, and its endorsement by senior executives, will be a clear signal to the US department of justice that her allegations, if proved, fall squarely within the ambit of the US Foreign Corrupt Practices Act. Rupert Murdoch’s US parent company, News Corporation, could face fines of hundreds of millions of dollars unless it can show it has co-operated vigorously with the authorities in rooting out malpractice.”

“I believe that where the problem may have become significant is that a very small number of relatively senior officers increasingly became too close to journalists.

“Not, I believe, for financial gain, but for the enhancement of their reputation and for the sheer enjoyment of being in a position to share and divulge confidences.

“It is a siren song. I also believe that they based their behaviour on how they saw politicians behave, and that they lost sight of their professional obligations.’

News Corp’s management and standards committee handed over a number of incriminating emails to police for their investigations. So far ten staff at The Sun, two police officers, an army official, someone from the Ministry of Defence and a relative of a public official have been arrested over the allegations.

The revelations come as Rupert Murdoch launched a Sunday version of the paper just last week, which sold 3.26 million copies.

Nick Davies, the investigative journalist for The Guardian who brought the entire NotW phone hacking scandal to light, says the evidence from police begins to destroy the power of the News International tabloids:

“The phone-hacking scandal never was simply a story about journalists behaving badly: it was and is about power.

On Monday, in an outbreak of peculiarly destructive evidence, Lord Justice Leveson’s courtroom became a battlefield for two parts of a defining power struggle.

The first was short term. In the past few weeks, those who lost some of their power last summer, when the facts of the scandal finally erupted, have been trying to reclaim it. In 20 minutes of deftly understated evidence, Deputy Assistant Commissioner Sue Akers sent them packing.”

Meanwhile, back at the News of the World phone hacking scandal, singer Charlotte Church settled her hacking claim against NotW for 600,000 pounds. She had originally wanted to take it to a full trial, but had changed her mind after the cost — both personal and monetary — was weighed up.

“You just have to look at the court room, look at News International and their 25 lawyers and then look at the individuals with maybe their three lawyers and one barrister and a couple of juniors,” Church told The Guardian. “You are fighting a massive corporation with endless resources, a phenomenal amount of power and it is just made really difficult.”

Lord Prescott, former deputy British PM and a victim of the NotW hacking, told the Levenson inquiry about the power that News International yielded with police:

“There is always a price. It is not exactly corruption: they do have interests, power, and in the Murdoch press it is particularly organised to achieve that. I never went to a social do. I thought you paid too much of a price for it. All of the leaders of the parties, and I include [David] Cameron, they believe you have to have access to editors as though they act independently [of Murdoch]. And then the paper [the Sun] says ‘we won it’.

“It is absolutely clear to me that News Group were able to rely upon the inadequate police investigation to justify its (untrue) claim that the wrongdoing was limited to one person at the News of the World. For four years the MPS [Metropolitan Police] did not contradict any of these claims. In my view, the MPS has supported and assisted an organisation guilty of criminal behaviour and prioritised this over the fights of thousands of potential victims, including ordinary people whose privacy rights had been seriously violated and who knew nothing about it.

That is deeply shocking. The public duty of the MPS is to deal with crime and to protect victims of crime. In this case they appeared to have protected the perpetrators and misled the victims.”

Today’s Guardian front page is pretty great as well, particularly with this image of Rupert Murdoch’s faced constructed with photos of phone hacking victims — both alleged and proven. 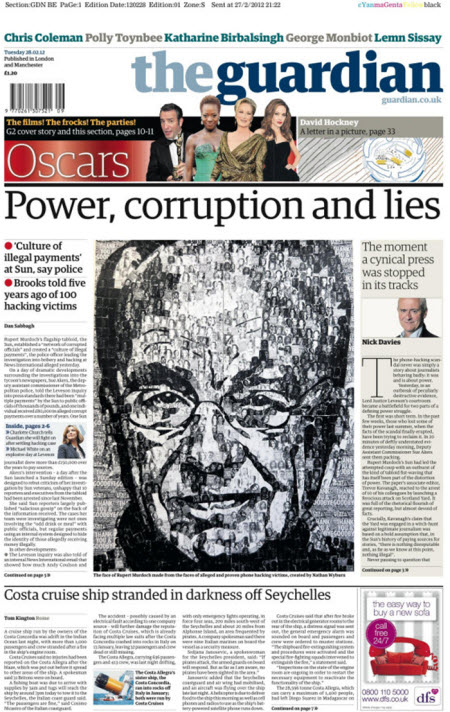 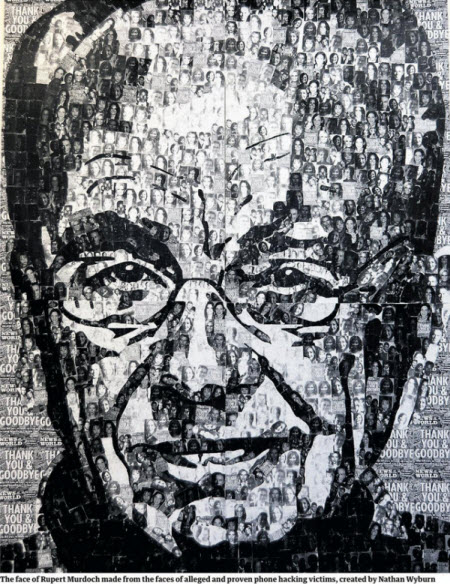 Paddy this could not possibly be happening here could it? In amongst all the mining money, tobacco money, oil and gas money and big business money; surely the party of No, the loser and the rest of the Public Service Grench type people would not be able to hide mordoch cheques as well?
I`ve always said we have the best police force money can buy, and big business has always known they have a party with benefits, but once the FBI gets involved we will never know the truth.

It is interesting to watch how Rupert left James in the USA and brought Lachlan as his walking crotch.
It seems a lot of Rupert disreputable strategies are coming home to bite him on the only piece of his anatomy pointing to the earth.
He first of all denied it all happened with the aid of James, and under oath, and then proceeded to thwart the Police abilty to demand, under legal writ, his files by offering “co-operation” That strategy is now falling apart as we discover that his ‘co-operation’ is but a facade to allow him and his minions to endeavor to affect a cover-up.
This man and his male offspring have no idea of the what constitutes the truth and no respect for business or public ethics.
The queation that each of the nations in which he tries to politically influence and determine who should occupy their treasury benches is, IS HE FIT TO OPERATE SUCH AN IMPORTANT PART OF THE DEMOCRATIC PROCESSES.
And the answer has to be a resounding NO!

i was thinking before that next to politicians, journalists would have to be one of the least trusted profession out there. at least in popular tabloid media. and yet they take themselves so seriously as to be virtually above reproach.

Hernando Garcia.
The journalist craft used to be only topped by the medical profession in the alchoholic stakes.
Now they also compete with secondhand car salesmen and insurance agents in the credibity stakes.
Maybe one is the results of the other precedence.