In today's Media Briefs: Melbourne viewers dip to zero for Ten’s Breakfast debut ... Sun on Sunday: never has a newspaper been launched in such adversity ... Charlotte Church settles over phone hacking and more ... 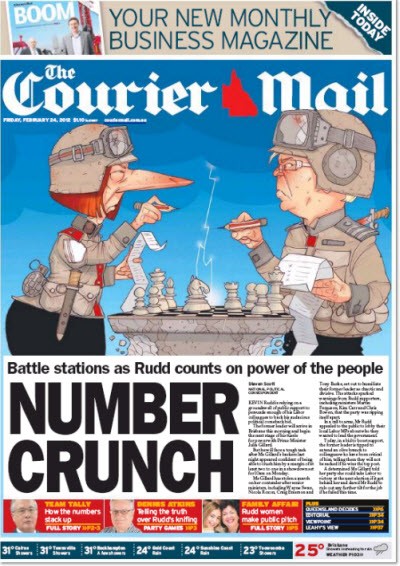 “Ten’s Breakfast faces an uphill task to pull in viewers, ratings from its rushed launch show suggest. It suffered the ignominy of recording no viewers at all in Melbourne for a 15 minute segment of the show.” — mUmBRELLA

Sun on Sunday: never has a paper launched in such adversity

“Sundays are going to be fascinating for a while after the launch of the Sabbatarian Sun. But rarely has a paper been launched against a background of such adversity.” — The Guardian

“Singer Charlotte Church has settled her damages claim against News Group Newspapers over the hacking of her phone, London’s High Court has heard.” — BBC

“The James Packer and Kerry Stokes-backed Consolidated Media Holdings is banking on Foxtel’s merger with Austar and a suite of new sports offerings to drive growth after the tough retail environment hit earnings during the half. ” — The Australian

“The ABC is set to trial new technology which integrates Twitter and Facebook integration with on-screen viewing.” — TV Tonight

Wounded journos in Syria appeal for help on YouTube

“A British and a French journalist wounded in the attack that killed Marie Colvin, the Sunday Times war correspondent, issued appeals for their evacuation from Homs as the city came under renewed bombardment by Syrian government forces.” — The Telegraph

Ah, yes, “The Curry or Maul (Depending on Party)” – after what they’ve done in their rather unique situation up here?
With it’s two toned, two speed – reticence vs. lightning alacrity (“Iraq”/”non-core promises”/”Children Overboard” vs. “Utegate”/”Tantygate”/”Burkegate” etc) – attitude to full and frank disclosure when it comes to the whole unexpurgated truth and to “a fair go” in how they’ve pushed and promoted positive conservative PR, as seen in how it handled Howard’s many and varied approaches to truth, usually as pardoner and apologist – while concentrating our collective electoral attention on the negative embarrassing PR when it comes to “the Left” (“Unclean if you vote Green”?) to influence perception – today we find lecturing us “locals” on how awful it is to have a government that runs on truth as a last resort and what isn’t “the Australian way” (when it comes to treating Rudd) – and who’s promoting this internecine war, so beneficial for their “Limited News Party”, thank you very much? Like they did “Costello vs. Howard”, or “Turnbull vs. Abbott”?

Re 10’s breakfast show. That would be nz $1 million well spent by Lachlan then.